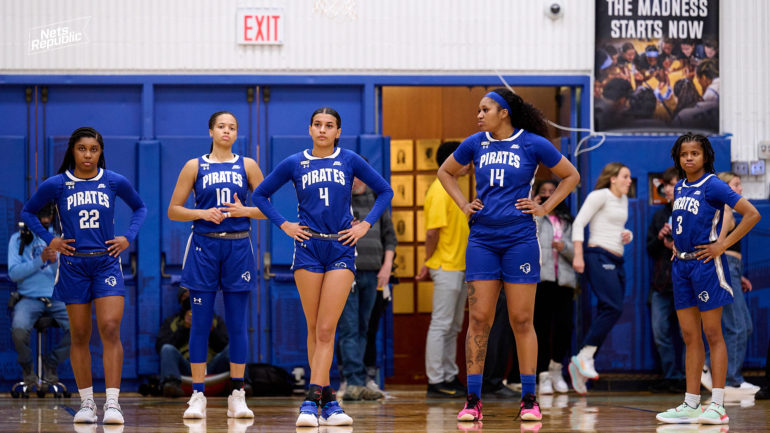 Seton Hall’s WNIT Run Ends, but the Future is Bright

After a close loss to Villanova in the semi-finals of the Big East Tournament, Seton Hall guard Lauren Park-Lane took a seat at the press table next to her head coach Tony Bozzela. The mood was somber, but Bozzela opened the press conference with pointed passion, upset with the lack (and quality) of coverage. “We have a damn good team,” he said, “and the lack of respect we got was disgusting.”

New Life in the WNIT

Coach Bozella’s comments seemed like a summary of the 2021-2022 season as he continued to describe their accomplishments throughout the year and speak to their preparedness for 2023. In the days that followed, however, the Pirates wound up receiving a surprising at-large bid to the Women’s National Invitation Tournament (WNIT). There were 35 teams invited to participate in the single-elimination tournament and the Pirates had at least one more chance to take the floor and prove their conference tournament run was no fluke.

The Pirates began the tournament by rattling off consecutive wins against Fairleigh Dickinson, VCU, and Drexel, but the winning didn’t stop there. The Pirates found themselves in a tightly contested matchup with Columbia with a berth to the WNIT Final Four on the line. As she had done all year, Lauren Park-Lane took over the game with a 29-point effort that led her team to another victory.

If you’ve watched her play, the numbers shouldn’t surprise you. She led the Big East in assists and became one of nine players this year to score at least 22 points in the four straight wins, averaging 27.2 points per game (PPG). It’s rare to see such a skilled scorer boast similarly impressive assist numbers and it resulted in a unanimous selection to the All Big-East team. As someone who has been doubted for her size, there’s no doubt her heart and skill set make up for what she lacks in height.

Things were looking easy for the Pirates in the WNIT Final Four game on the road at Middle Tennessee State University, after jumping out to a 22-point lead with less than four minutes remaining in the first half. The Pirates were led by 29 first-half points from forward Sidney Cooks. Winning on the road in March is never easy, of course, and MTSU stole away the momentum first, and then the lead. With only 24 seconds remaining, the Pirates found themselves trailing to MTSU by four points, and it seemed likely they’d squandered their opportunity at a spot in the championship game. The Pirates needed something special to keep their season alive.

Coach Bozella elected not to call a timeout and put the ball into the hands of his all-conference guard, Park-Lane, who ran a simple give-and-go with Andra Espinoza-Hunter. After drawing the defense, Park-Lane got the ball to Espinoza-Hunter, who converted a successful three-point play after scoring through contact. The Pirates then earned a change of possession after forcing a jump ball. Espinoza-Hunter hit Cooks with a lob pass underneath to give the Pirates a one-point lead with less than three ticks left, and the Pirates were on to the WNIT Championship.

On Saturday, April 2nd, Seton Hall’s incredible postseason run in the WNIT came to an end in Brookings, South Dakota. The Pirates suffered their second-largest loss of the year 82-50 to South Dakota State. The Jackrabbits built an 18-point lead after the first quarter and the Pirates could never get momentum back on their side. Unsurprisingly, Lauren Park-Lane and Sidney Cooks were named to the WNIT All-Tournament team. While this was a sour note to end the season on, Coach Tony Bozzella and his squad have a lot of bright spots to both look back on and forward to as the 2023 season approaches. They won 15 of their last 18 games ending the season with 24 wins (most since 2015-2016) and Park-Lane set University single season records in both total points and total assists.

What’s Next for Tony Bozzella’s Squad?

Seton Hall is returning four of five starters including All Big East First Team selections: Park-Lane and Cooks. The Pirates will have a big hole to fill as they lose All-Big East Second team member, Espinoza Hunter who averages 15.1 PPG. Coach Bozzella is bringing in two transfers in from the portal:

Head Coach Bozzella and Assistant Coach Lauren DeFalco have proven they can be successful with integrating transfers as the evidence is clear with Espinoza-Hunter (Previously Miss. St/UConn), Cooks (Previously Miss. St/Mich. St.) and starting forward Mya Bembry (Penn State). The Pirates run at the end of the season should be a great launching pad as we look towards the 2022-2023 campaign. There’s no doubt that Seton Hall will be taking aim at a return back to the NCAA tournament for the first time since 2016.