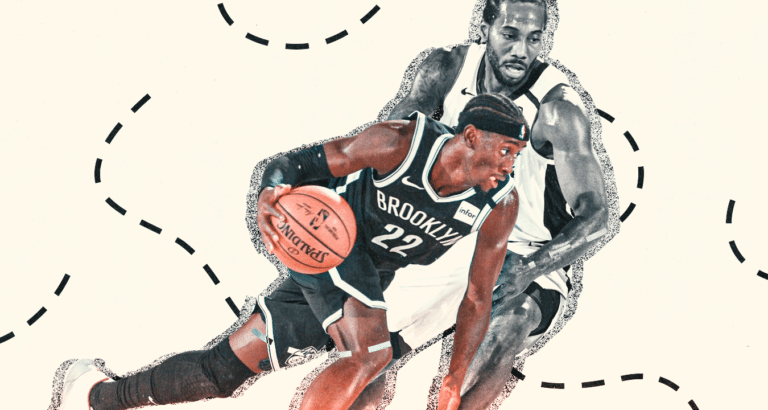 How the Nets Fixed Their Pick and Roll, and Hung 129 on the Clippers

Many of the Brooklyn Nets’ worst fears were realized on July 31st, after dropping their first game of the NBA Restart to the Orlando Magic. The contest wasn’t close after the first quarter. It was, in part, due to the Brooklyn defense’s inability to stop even a nosebleed. But that was a common theme throughout the NBA’s Bubble games; scoring in general has skyrocketed. I’m assuming guys weren’t putting themselves through defensive help drills over quarantine.

What was more concerning, and sadly predictable, was the lack of offense the Nets provided between the first quarter and what devolved into garbage time. They came out firing, sure, putting up 39 points in the first quarter vs. Orlando. But the reserve unit that started the second quarter couldn’t keep up the pace, and neither could the starters once they returned. Brooklyn delivered the first punch, then got knocked down and never truly got off the mat.

The majority of those 39 first quarter points were generated through the pick and roll combination of Caris LeVert and Jarrett Allen. Along with Joe Harris, they constitute the only NBA-grade offensive threats the Nets were able to bubble wrap and ship safely to Orlando. So, whenever Brooklyn wasn’t running Harris through a myriad of off ball screens, it was up to LeVert and Allen to create.

Early on, it worked! The Magic were insistent on sending the ball-defender over the Jarrett Allen screen. Thus, Orlando left Nikola Vucevic to lumber around as the Monkey in the Middle, watching Caris LeVert slice and dice his way to the basket. Over and over again. Magic coach Steve Clifford adjusted after the first intermission, however. Orlando started blitzing Brooklyn’s pick and rolls, and quickly blew out whatever flame the Nets offense had sparked.

Boy, does July 31st feel like eons ago. The Nets are 5-1 since; they’ve done much more than just peel themselves off the mat. Opponents counterpunching their pick and roll offense by trapping it is no longer the knockout blow it was, and that was no more apparent than in their 129-120 win over the Clippers.

Tale of the Tape

The talk that Brooklyn would be the worst team at the NBA Bubble wasn’t totally unfounded. Take away LeVert and Harris, and who was going to create offense? Early on, the answer was, as many expected, nobody.

Here, the Nets and Magic willingly sign off on each other’s terms and conditions. Orlando traps LeVert, and Allen catches the ball as the sudden dictator of a 4-on-3 situation. In swinging the ball weak side, he makes the right play. Unfortunately for Brooklyn, the ‘right play’ is putting the ball of Chris Chiozza and Lance Thomas, neither of whom stirke an iota of fear in Orlando.

Sure, Jarrett Allen could have felt James Ennis’ presence on his back, and kept the ball on the strong side, dishing to an open Joe Harris in the corner. But why ask Jarrett Allen to be Nikola Jokic when there are much more practical solutions?

Fast forward to August 9th against LA, and head coach Jacque Vaughn was implementing such solutions. On the above set play, Joe Harris and Rodions Kurucs compromise a much more enticing weak side duo off of the Allen catch. Brooklyn’s coaching staff garnishes the set with a nice back screen, set by Kurucs for an abruptly wide open Joe Harris. It’s the little things in life.

Part of it comes down to simply making shots, which Brooklyn certainly did a better job of vs. the Clippers. But the right players have to be in positions to make those shots. Jacque Vaughn has done a better job of putting competent marksmen in Allen’s line of vision off of the catch.

Caris LeVert has also improved at standing tall in the eye of the storm. As the Magic started trapping him more aggressively, he played into their trap. Orlando pushed Brooklyn’s offense further and further away from the basket, which often stagnated as LeVert eagerly picked up his dribble.

Here, the offense stagnates to the point that Vucevic is both able to trap LeVert and get in front of Allen on the catch. What is designed to be a 4-on-3, or even a 3-on-2 situation with Temple rising, turns into a mucky 3-on-3. It’s a situation that Allen is ill-qualified to be a conductor of, and Brooklyn doesn’t get a clean look. The weak side defender doesn’t have to stray off of Tyler Johnson at all. Orlando’s defense in general is hardly in scramble mode.

Perhaps it was simply Caris LeVert getting used to the Bubble, but by the Clippers game, he was stuck in attack mode, even against the trap.

The above possession is buoyed by a couple factors. Firstly, the action occurs in the middle of the floor; there is no out of bounds line to help contain LeVert. Brooklyn has ditched some of its side ball screens throughout the Bubble in favor of these, and it has opened up the floor considerably. But more importantly, LeVert doesn’t shrink at the sight of slow-footed JaMychal Green. By the time Caris picks up his dribble, he’s created a passing lane to each of his four teammates. Kawhi Leonard, likely the best help defender in the NBA, has two feet in the paint on this play. He’s leaving Garrett Temple, who had already made four 3’s, wide open, and he still isn’t low enough to get in front of Jarrett Allen, who has rolled all the way to the front of the rim.

LeVert’s patience is visible again on the above possession, which is strikingly similar to the previous one. The action takes him, again, to the middle of the floor. Zubac, unlike JaMychal Green, however, doesn’t even really try to trap. His presence doesn’t force LeVert into an early pickup at all, yet he’s floated too far up to get back to Allen on the roll. It’s easy pickings from there; LeVert pounces the moment Landry Shamet commits too strongly to Garrett Temple, drifting up to the weak side wing.

Everything looks better about the Nets offense than it did on July 31st. The spacing of the offense is truly threatening now, especially with players like Tyler Johnson and Timothé Luwawu-Cabarrot finding their stride from distance. Caris LeVert grows into more of a true lead guard each day, no longer passing when his shot isn’t there, but passing when he sees opportunities for others. And Jacque Vaughn has earned Coach of the Bubble consideration, if not front-runner status. A Nets offense that we feared may have to spend its time scrounging for loose change is now filled with bells and whistles that create open looks more often than not.

Brooklyn’s reward for their surprising offensive chutzpa is a first-round matchup with Toronto Raptors. The same Raptors, who, in last year’s Finals, defended Steph Curry’s pick and roll as well as humanly possible. Toronto threw a ton of traps at Curry and the Dubs, and they proved fruitful. If Brooklyn has truly conquered the trap defense, they’ll get their shot to prove it, and more.