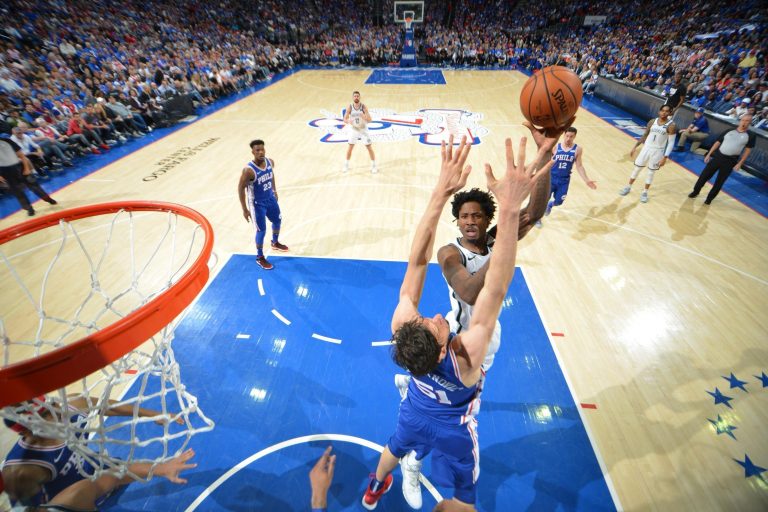 PHILADELPHIA, PA - APRIL 13: Ed Davis #17 of the Brooklyn Nets shoots the ball against the Philadelphia 76ers during Game One of Round One of the 2019 NBA Playoffs on April 13, 2019 at the Wells Fargo Center in Philadelphia, Pennsylvania NOTE TO USER: User expressly acknowledges and agrees that, by downloading and/or using this Photograph, user is consenting to the terms and conditions of the Getty Images License Agreement. Mandatory Copyright Notice: Copyright 2019 NBAE (Photo by Jesse D. Garrabrant/NBAE via Getty Images)
Home
Brooklyn Nets
Justin Thomas

The Brooklyn Nets went into Philadelphia to take on the 76ers for Game 1 of the Eastern Conference Playoffs. This is the first time the Nets have been in the playoffs since the 2014-2015 season. For Philadelphia, this is the second straight year of going to the playoffs. The last time these two teams met in the postseason was 1984.

Coming into the game the big story was whether or not Joel Embiid (knee) would play. In fact, nobody knew if he would play until a few minutes before tip-off. Embiid starting couldn’t have been worse news for Jarrett Allen. Within the first few minutes, Embiid drew two fouls on Allen. Kenny Atkinson took a gamble leaving him in and before the quarter was over he picked up his third foul. Although he was pretty much a non-factor in the first half, Allen did provide some of his usual defensive prowess. On a Philadelphia fast break, Allen blocked the dunk attempt of Tobias Harris early in the first quarter:

To say the beginning of the game was a struggle for both teams is an understatement. Both squads started off shooting poorly from the field as no team could but a basket. Joe Harris provided a spark for the Nets early knocking down a few threes. Although it was back and forth for most of the first quarter, the Nets ended the period on a 12-0 run to go up 31-22.

In his first playoff game, D’Angelo Russell also had a rough start. He started the game 2-for-11 and just could not get any of his shots to fall. This wasn’t a big deal, however, as Spencer Dinwiddie and Caris LeVert took over the scoring burden for Brooklyn. They were a big reason why the Nets were able to amass a double-digit lead in the second quarter. LeVert himself finished the first half with 16 points.

The Sixers poor shooting also played a factor in the first half. They didn’t hit their first three-pointer until late in the second quarter. The biggest difference in the first half was the bench, which is an area where the Nets had an advantage in coming into the game. Brooklyn’s bench outscored the Sixers bench 35-18. For as well as the Nets played in that first half, Philadelphia did go on a run to close out the half. Jimmy Butler hit a three-pointer at the buzzer to cut the Nets lead to eight at halftime.

At the start of the second half, the Sixers picked up right where they left off to close the first. They went on an 18-3 run during a three-minute stretch and brought the Nets lead down to as little as 2 points. Spearheading this comeback effort was Jimmy Butler, Joel Embiid and Boban Marjanovic. They combined for 20 of Philadelphia’s 28 points in the quarter. 65-63 was the closest the Sixers got in the second half as another dominant third quarter by D’Angelo Russell kept the Philly comeback at bay. Russell dropped 14 points in the quarter on 6-for-9 shooting. His midrange game, which had been non-existent in the first half, had finally emerged.

The Nets version of small ball really changed the tide of the game in the latter half of the third quarter. The lineup where Jared Dudley was playing at the center position provided ample spacing on the offensive end. After the lead was cut to two, the Nets outscored the Sixers 30-19 over the final eight minutes.

The fourth quarter is where Brooklyn truly started to pull away. They continued to go with their small ball lineup as Dudley and Ed Davis were used as the centers throughout the quarter. Rodions Kurucs and Treveon Graham provided energy and activity on the defensive end while Dinwiddie, LeVert, and Russell did what they had to do to close out the game. JJ Redick even fouled out midway through the fourth. The closest the Sixers got was 10 points and after that, the Nets coasted by double-digits for the rest of the game. Throughout the second half, the sound of boos could be heard throughout Wells Fargo Arena. By the time the last media timeout rolled around, the arena had begun to clear out. When the clock hit double zeros, the Nets were victorious 111-102. It was their first road playoff win in over six years.

Observations and Looking Ahead

It was a great win for the Nets from top to bottom. When one or two players weren’t clicking the other guys around them picked up the slack. The biggest observation from the game is that Jarrett Allen may be a liability for the Nets in this series, especially against Embiid. We saw early on that Embiid is much more skilled and gifted physically than Allen. It’s no coincidence that the Nets played better as a unit whenever he was on the bench. The small ball approach definitely opened up the floor on offense and forced the Nets to crash the boards as a team on defense. Another big factor in the game was how much of a non-factor the Sixers starting lineup was. Coming into the postseason every Sixers starter averaged over 16 points per game. Only 2 starters, Embiid and Butler scored in double digits. The other 3 starters combined for only 18 points.

Now it’s hard pressed to think that the Sixers starters will shoot this poorly as a unit but it’s clear Kenny Atkinson and his staff have devised a pretty good game plan. Embiid’s knee may be slowing him down a bit on both ends of the court and the Nets have to continue to exploit that. The three-point shot and free throws may also prove to be deciding factors in this series. The Nets shot 11-for-26 from three-point range while the Sixers shot an abysmal 3-for-25. At the free throw line, the Nets shot 24-for-26 while Philadelphia went 29-for-42.

It’s imperative the Nets bring the same energy to Game 2 as they did in Game 1. Philly has already lost the home court advantage in the series and will be looking to do everything in their power to have the series tied up going back to Brooklyn. However, if the Nets can continue their hot shooting and keep up the intensity on the defensive end, they’ll be that much closer to causing an upset.