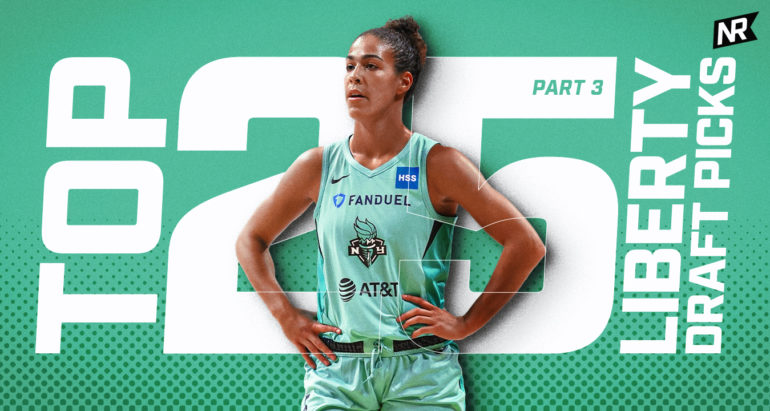 This is part three in a five-part series honoring the best 25 draft picks in Liberty history.

In the third installment, I break down the 11th-15th best draft picks ever by the New York Liberty. In the continuing celebration of the Liberty’s 25 Anniversary, I acknowledge each woman’s contribution to the Liberty during their tenure, and a “Where are they now?” follow-up for any retired player. The list will also include players from the 1997 Elite draft.

What went into these rankings? Overall statistics, number of games, and seasons with the Liberty, as well as any awards and playoff appearances. An athlete’s impact off the court with fans and their communities also entered into the consideration.

As a reminder, though likely considered some of the best ever to play for the Liberty, the following players were not drafted by New York. Rather, these players were acquired either through a trade or via free agency:

Kia Nurse was drafted with the 10th overall pick in the 2018 Draft out of UCONN. She was highly touted prospect that was believed to be a potential lottery pick in what was projected to be a deep draft. In her rookie season, Nurse would average 9.1 points per game (PPG), 2.4 rebounds per game (RPG), and 1.6 assists per game (APG). The highlight of her rookie season would come on June 2, 2018, when she led the Liberty to an overtime victory over the Indiana Fever while scoring 34 points off the bench. In 2019, Nurse’s numbers jumped in every category to earn her an All-Star nod. Mostly pegged as a three-point specialist, Nurse averaged 13.7 PPG, 2.5 RPG, and 2.3 APG as a sophomore while starting all 34 games.

On July 25, 2020, Nurse would suffer an ankle injury in their season opener. Thankfully, she would miss just three games with the ankle sprain. However, her shooting would take a drastic dip going from 39.3 percent in 2019 to 27.3 percent in 2020. Furthermore, her signature three-point shooting would also plummet, toppling from 35.3 percent down to 23.8 percent. Her 2020 season would be her last with the Liberty despite leading the team in scoring with 12.2 PPG. In the offseason, New York traded Nurse and Megan Walker to the Phoenix Mercury in exchange for the Mercury’s sixth overall pick (Michaela Onyenwere) and a 2022 first round pick. Nurse finish her three-season stint with New York compiling 1,031 points, 227 rebounds, and 180 assists.

Brittany Boyd-Jones was drafted ninth overall in the 2015 following a trade that sent Alex Montgomery (#16 on our list) to the San Antonio Stars. Boyd-Jones, regarded more as a defensive-minded point guard, would start four games in her rookie season. Averaging 14.3 minutes per game (MPG), Boyd-Jones would be an immediate, reliable defensive stopper for the Liberty. Posting a respectful stat line in her rookie year would see her average 6.6 PPG, 2.7 RPG, 2.3 APG and 1.2 steals per game (SPG). These numbers would earn her a spot on the All-Rookie team along with teammate Kiah Stokes, Jewell Loyd, Ramu Tokashiki, Natalie Achonwa, and Ana Dabović.

Posting fairly similar numbers in her 2016 season, Boyd-Jones would see a slight uptick in her MPG (19.3), APG (3.6), and SPG (1.6). The 2017 season was set to be Boyd-Jones’ breakthrough year. However, two games into the season, Boyd-Jones would suffer a season ending torn left Achilles tendon, an injury suffered during the fourth quarter of the Liberty’s game against the Minnesota Lynx. In 2018, Boyd-Jones would start just 14 games, but would set career-highs in MPG (20.4), APG (5.3), field goal percentage (41.4 percent), and three-point shooting (37 percent).

2019 was Boyd-Jones’ final season with the Liberty. Her numbers would slightly decline while averaging just 5.3 PPG and 4.6 APG, alongside 2.5 turnovers per game (TPG). Boyd-Jones’ best asset was driving into the lane and lifting floaters over much taller defenders. Pesky on defense, her game early on was once compared to Liberty legend Teresa Weatherspoon. Despite receiving a training camp invite in 2020, Boyd-Jones would be waived and not signed by another team for the 2020 season. In her five years with the Liberty, Boyd-Jones ranked eighth all-time in assists (504) and 10th all-time in steals (174).

Ahead of the 2021 season, Boyd-Jones received a training camp invite from the Chicago Sky but would be waived prior to the start of the regular season. She would, however, be brought back for two games on a hardship exemption following the injury to Azurá Stevens. Boyd-Jones has not played since being released from her hardship contract on May 20, 2021.

In the 2015 draft, the Liberty selected Kiah Stokes 11th overall out of UCONN. In her rookie season, she would play in all 34 games, starting in six of them, and put up averages of 5.8 PPG, 6.4 RPG, and 2.0 blocks per game (BPG) while shooting 54.7 percent from the field. Respectable numbers her rookie year would earn her a spot on the All-Rookie team along with teammate Brittany Boyd-Jones, Jewell Loyd, Ramu Tokashiki, Natalie Achonwa and Ana Dabovic.

2016 would see her numbers climb in every category. Her shooting would jump up to 64.1 percent, and she’d average 7.4 RPG and 6.9 PPG. Used more as a defensive stopper inside, Stokes’ offensive additions this season would be key to the Liberty achieving their 21-13 record, the best in the Eastern Conference.

After Kia Vaughn was re-signed to a second stint with New York ahead of the 2017 season, Stokes was relegated to the bench. Vaughn, seen as more of an offensive threat than Stokes, would cause Stokes’ minutes to drop down to just 19.6 MPG. Furthermore, the maturity of Amanda Zahui B. would also lessen Stokes’ role. Her PPG would fall to 4.8, but she would still compile 6.3 RPG and 1.1 BPG.

Stokes’ stock would continue to dip in 2018. Deemed a rebuilding year, plus the continued evolution of Zahui B., would cause Stokes’ numbers to drop once again, down to 14.2 MPG, 3.1 PPG, and 4.5 RPG.

Stokes ended up opting out of the 2019 season for personal reasons. Due to overseas commitments and obligations with the Turkish national team, Stokes promised her fans that “she’d be back next summer, don’t worry.” On September 10, 2019, the Liberty would re-sign Stokes to a one-year deal.

When Stokes returned in 2020, she was suddenly a seasoned veteran on a Liberty team with eight rookies. Charles was traded to Washington, Allen had opted out, Bria Hartley signed away with Phoenix, and Brittany Boyd-Jones was waived. Starting in all 22 games, Stokes would average 5.7 PPG through a career-high 27.3 MPG, while pulling down 6.7 RPG and swatting 1.2 BPG. Moat notably, under the new coaching staff led by Walt Hopkins, Stokes added a three-point shot to her game. Prior to 2020, Stokes had attempted only three shots from long distance. Though she made just 23.5 percent of her long-range darts, Stokes took a staggering 85 (making 20). On September 13, Stokes would sign another one-year contract extension.

2021 would be Stokes’ final season with the Liberty. Due to overseas commitments, Stokes would arrive late for the 2021 season. Additionally, Stokes would be required to miss more games midway through the season due to Turkey participating in EuroBasket 2021 in June. After playing in only 9 games, New York waived Stokes on June 30. On July 2, the Las Vegas Aces picked her up, signing Stokes for the remainder of the season.

Through 156 games, Stokes ranks fourth all-time in Liberty history in rebounds with 948, and is the Liberty’s all-time leader in blocks with 193. No current member of the Liberty is anywhere close to breaking her blocks record.

2006 would be Moore’s opportunity. With moving Hammon over to the two-guard spot, Moore would start in 29 out of 34 games in 2006. The move enabled Hammon to focus more on her shooting than ball-handling. Following the promotion in playing time—28.0 minutes a night—Moore put up averages of 6.1 PPG, 4.2 RPG, 3.6 APG, and 1.8 SPG. Though the Liberty would miss the playoffs, Moore had found her spot on the team and the league noticed.

Following Hammon’s departure to San Antonio, Moore would earn a larger share of responsibility in her third season. Starting in all but one game, Moore would average career highs in PPG (9.6), APG (4.8), and SPG (2.2). Her defensive skills would earn her a slot on the All-Defensive second team.

On March 18, 2008, Moore would receive a three-year contract extension. However, 2008 would see Moore’s numbers drop while missing five games on the season. Bringing in only 5.3 PPG on 34.2 percent shooting, Moore was seen as strictly a defensive stopper yet still managed to still put up averages of 4.8 APG and 1.5 SPG.

2009 would end up as Moore’s final season with the Liberty. Despite a slight uptick in her numbers from the previous season, Moore finished with her worst shooting year at only 33.5 percent, while the Liberty finished last in the Eastern Conference with a 13-21 record. Moore would play 123 total games for New York and would rank second all-time in steals (256) and sixth all-time in assists (569).

Prior to training camps in 2010, Moore would be released by the Liberty, who instead chose Leilani Mitchell as their starting point guard. Moore would be picked up by the Seattle Storm immediately. Two weeks into their training camp, though, she would tear her left meniscus and ended being waived. Through surgery and an eight-week recovery period, Moore would be given another chance with a tryout with the Atlanta Dream but didn’t make the roster.

A training camp deal would follow in 2011 with the Los Angeles Sparks but she would remove herself citing medical reasons. Moore would make one last attempt in 2012 with the San Antonio Stars, but would be released prior to the start of the season. Following her playing career, Moore would go on to coach with the Citrus College Owls until May 2016.

When it was announced that the Liberty had won the first overall pick in the 2020 draft, it was known then that the team would pick Oregon standout Sabrina Ionescu. Ionescu heading to the Big Apple would be seen as a franchise changer. General manager Jonathan Kolb focused on cleaning house and rebuilding around her. Following some uncertainty, Liberty legend Charles would be traded to the Washington Mystics for a total of five draft picks just prior to the 2020 draft. The rebuild had begun.

There were certainly high expectations. However, a less than expected “wubble” season would be on the horizon. Opt-outs from Marine Johannès, Allen, Asia Durr, and Nayo Raincock-Ekunwe would put more responsibility on Ionescu. In just her second game, Ionescu would drop 33 points (including six-of-10 from three), seven rebounds, and seven assists on July 29 against the Dallas Wings. The following game on July 31 would end her season early. A Grade 3 left ankle sprain suffered during the second quarter against Atlanta would spell the end to her highly touted rookie year.

With a healthy Ionescu, expectations were again high heading into the 2021 season. In just her third game of the season, Ionescu would record the first triple-double in Liberty history. She would also be the youngest player in league history to record the feat. With 26 points, 12 assists and 10 rebounds, Ionescu has cemented herself in the history books for New York.

Through 23 games this season, Ionescu has averaged a respectable 10.5 PPG, 5.8 APG, and 5.7 RPG. Despite missing two games this season due to her ankle, Ionescu returned after the Olympic break to average 13.0 PPG and 5.0 APG so far, while shooting 45.9 percent from the field and 36.0 percent from three. With seven games remaining in the 2021 season, the Liberty currently sit a half-game ahead of the ninth place Dallas Wings.

Ionescu’s primary goal is to make the playoffs.

Part four of the series will be released the week of August 29.