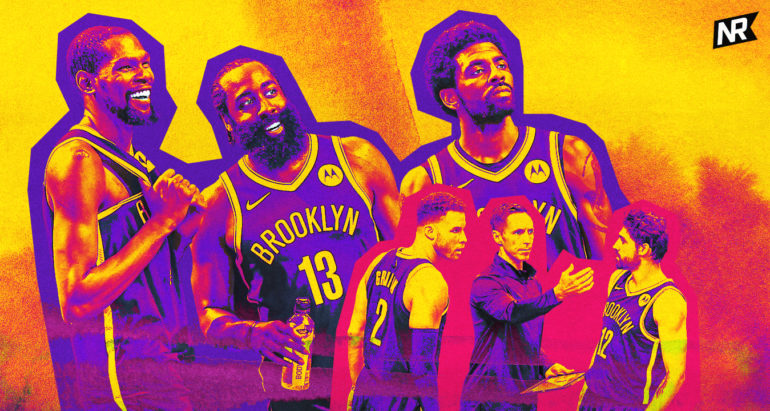 It feels like a long time since we watched in dismay as the Brooklyn Nets tumbled out of the 2020-21 playoffs due to a mix of injuries, circumstance, and Kevin Durant’s incredibly lengthy feet. Mercifully, the NBA’s 75th anniversary season tips off on Tuesday, October 19, 2021, and the Nets have a chance to exact revenge on their opponent from the Eastern Conference Semifinals—and eventual champions—the Milwaukee Bucks.

As excitement builds for the upcoming campaign, let’s pore over the lessons we can learn from the last time out and the exciting prospects that have us itching for game day. Here are four things that we’ll be looking out for.

Against a backdrop of “player empowerment,” a lot has been said about the Big Three of Kevin Durant, Kyrie Irving, and James Harden—and them teaming up in the bright lights of Brooklyn.

These are three players who have a combined 27 All-Star appearances, 19 All-NBA selections, seven scoring titles, two MVPs, and countless other accolades. Many members of the NBA media all but gave them the Larry O’Brien trophy when Harden negotiated his way out of Houston and onto the Nets. It wasn’t to be, and the three-headed monster only managed to play eight games together in the regular season.

In those eight regular season games, just 202 minutes, their net rating was +7.2—not exactly setting the world on fire. However, once the chemistry was built and it was playoff time, that skyrocketed to +22.1 (OffRtg 135.4 vs. DefRtg 11.3), including the Big Three combining to put 104 points on Boston by themselves in the first round.

With a chance to rest in the offseason (Olympics, Paris Fashion Week, and new babies aside), is a healthy Brooklyn squad poised to live up to the hype? Harden said it best, in an interview with Sports Illustrated’s Michael Shapiro:

At full strength, nobody can beat us. I’m just going to leave it at that.

If you spent any time on Nets Twitter ahead of the 2021-22 season, you’ll be well aware of the argument that “someone’s got to play defense.” This is a skull-numbingly boring take thrown at Nets fans by salty fans of other teams who thought that the Big Three couldn’t work together.

Last season, the Nets finished 23rd out of 30 in defensive rating (113.8) but led the league in offensive rating (118.3), sitting seventh in overall net rating. So yes, you may score a lot on them, but the Nets will just outgun you.

The Nets knew that this needed to be addressed, so Sean Marks and company got to work. Starting with the draft night signing of Jevon Carter from the Phoenix Suns (in exchange for Landry Shamet and the draft rights to 29th pick, Day’Ron Sharpe). Carter is known for his giving his all on the defensive end and sees effort on D as a must.

DeAndre’ Bembry also has proven himself as a spark plug and an extremely capable defender at the guard position. He was a fan favorite during his time in Toronto for buzzing around as a bundle of energy, getting into the passing lanes, and starting fast break opportunities.

Veteran forward James Johnson rounds out a triad of terror for opposing scorers, bringing a much-needed air of toughness and intimidation. Both his parents are black belts in kickboxing, and Johnson himself is a decorated kickboxer and MMA fighter, so anyone hoping to flex their muscles in any Nets’ direction will need to get through their enforcer first.

These players, plus the addition of Steve Clifford to the coaching staff, are going to make the Nets an even tougher team to beat.

The Nets are in win-now mode. We know this. Durant, Irving, and Harden—together with Blake Griffin—leave little room for development projects. It’s likely that newly-acquired veteran Patty Mills will be the most regular new face we’ll see playing meaningful minutes for this team, as he somewhat fills the Spencer Dinwiddie-shaped hole in the backup guard spot behind Harden.

But that’s not to say for stretches of blowout games, or on the second night of a back-to-back, we won’t see a few debutants in the black and white. Cam Thomas—co-MVP of Summer League—is the most eagerly anticipated rookie in a long time. His ability to get buckets is incredibly satisfying to watch. I honestly think there will be one night during this regular season we see Thomas go off for 20+ off the bench.

Once you add in big man and insatiable glass cleaner Day’Ron Sharpe and the likes of Kessler Edwards (who the Nets have signed to a two-way), one of the other 2021 draft picks Marcus Zegarowski and RaiQuan Gray, or Summer League standout David Duke Jr., there’s a decent crop of players that may find their way playing for the Nets, albeit in Long Island.

There are a few certainties in life: death, taxes, and Twitter completely blowing a string of poor performances out of all proportion. This is a personal one for me, but I find it incredible how our longest-serving Net and stalwart of the team, Joe Harris, has been disowned by the darker, grubbier corners of Nets Twitter.

Yes, Harris had the opportunity to score some clutch points at crucial parts of the Bucks series. Yes, he got paid a bunch of money to hit those shots. And yes, that’s incredibly frustrating to watch as a Nets fan during a series that went down to the wire. But these are the facts: Joe Harris is an elite shooter. One of the league’s best. You don’t give up on a guy who shot 47.5 percent from three on 6.4 attempts per game.

The scene is set for Harris to come out to reestablish himself as a league leader, but I don’t think it really needs to happen. In the words of Kevin Hart, let me explain.

Harris is an all-world, elite floor spacer. The perfect complimentary piece to hand around the perimeter while Durant, Irving, and Harden work their magic. Had the Nets been healthy last postseason, Harris wouldn’t have needed to be put into those clutch positions.

He’s not loud, he’s not brash, but Harris will casually continue to be incredible, and it’ll go under the radar as the Nets’ superstars soak up the limelight.

Far from “walking to the Finals” and “winning so much, it’ll be boring,” the Brooklyn Nets are on the precipice of a truly spectacular season.