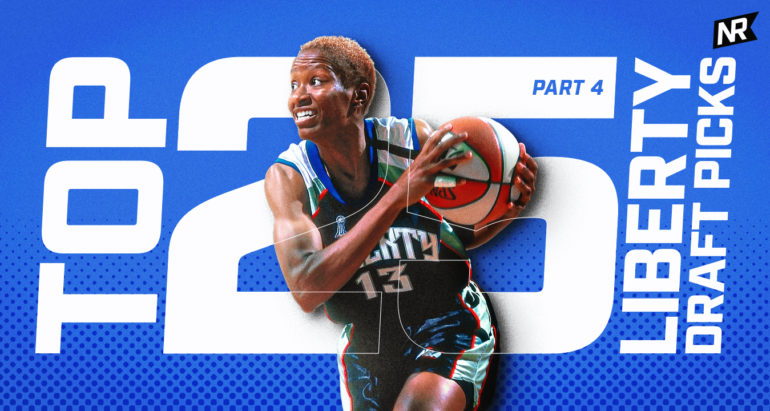 This is part four in a five-part series honoring the best 25 draft picks in Liberty history.

The celebration of the Liberty’s 25th anniversary continues. In part four of my five-part series, I continue to honor the top 25 picks in New York Liberty history with a break down of picks six through 10.

What went into the rankings? Overall statistics, number of games, seasons with the Liberty, as well as any awards and playoff appearances. An athlete’s impact off the court with fans and their communities also entered into the consideration.

As a slight reminder, though likely considered some of best ever to play for the Liberty, the following players were not drafted by New York. Rather, these players were acquired either through a trade or via free agency:

Thorn’s breakthrough season came in 2006, after an injury sidelined Becky Hammon. In her expanded role, Thorn finished a league best in three-point shooting at 43.1 percent. Her scoring average would nearly triple, rising to 6.1 PPG, her MPG increasing to 14.0.

2007 would see Thorn in an even larger role for New York. Following Becky Hammon’s trade to San Antonio, Thorn became the starting shooting guard job. Through 29 games, Thorn averaged career-highs in PPG (9.7), assists per game (APG) (2.5), rebounds per game (RPG) (3.0) and steals per game (SPG) (0.9). The new-look Liberty advanced to the playoffs, but Thorn averaged just 4.3 PPG during New York’s first round loss to the Detroit Shock.

Thorn’s final season with the Liberty came in 2008. With the addition of Essence Carson (7th overall pick), and the rise of Shameka Christian, Thorn’s role was reduced. Starting just five games, her numbers dropped to 11.9 MPG and 3.2 PPG while shooting just 34 percent from three-point range. In total, Thorn played 149 games with the Liberty, including 13 playoff games, and bring in 682 points. Thorn ranks 11th all-time with the Liberty in three-pointers made with 122.

In 2009, Thorn signed as a free agent with the Chicago Sky. She played her next three seasons there, before a year with the Minnesota Lynx in 2012, and a brief six-game stint with the Indiana Fever in 2013 to close out her career. Following her time in the WNBA, Thorn became an assistant coach at her alma mater of BYU for a short stint. She currently coaches a girls basketball club in Las Vegas.

Sophia Witherspoon was drafted 11th overall in the inaugural 1997 draft out of Florida. Witherspoon was a key member of the Liberty right from the start, immediately becoming their leading scorer. Starting all 28 games, Witherspoon would average 14.5 PPG and 3.0 RPG while shooting 40.6 percent from the field. Witherspoon and the Liberty would reach the 1997 Finals to lose to the Houston Comets, 65-51.

In 1998, Witherspoon’s numbers took a minor dip, but she still lead the team in scoring (13.8 PPG). The team, however, would miss the playoffs.

For the following season, 1999, the Liberty made some large additions: Crystal Robinson, Becky Hammon, Tamika Whitmore, and Michele Van Gorp. With this deeper roster, there was less of a scoring burden put onto Witherspoon. Averaging just 8.5 PPG and 18.2 MPG, she started 23 out of 32 games. The Liberty again reached the WNBA Finals, with Witherspoon contributing 7.5 PPG and 2.2 RPG during the six playoff games. New York once again fell to the Houston Comets, this time two games to one.

The 2000 season saw the league expand up to 16 teams with the additions of the Miami Sol, Portland Fire, Seattle Storm, and Fever. Left unprotected by New York, Witherspoon was selected 7th overall by the Storm. Following a trade, Witherspoon landed with the Portland Fire for the next two seasons. In 2002, the Los Angeles Sparks signed Witherspoon, where the veteran finally won a WNBA championship. She returned to the Sparks for one final season, calling it a career after the 2003 campaign.

Through 90 games with New York, Witherspoon compiled 1,091 points, 222 rebounds, 158 assists, and 122 steals. Witherspoon’s three year scoring average, 12.1 PPG, ranks fourth all-time in franchise history. Following her playing career, Witherspoon has taken up coaching, starting in 2007. She coached first at Forest Grove Middle School (2007-2008) and Lincoln Park High School (2008-2009), before settling in to coach at her alma mater of Fort Pierce Central High School beginning in 2010. Witherspoon has also coached for Team USA with their U17 World Cup team in 2018 as a court coach and in 2021 as an assistant on the U16 National Team.

The Liberty drafted Kia Vaughn 8th overall in the 2009 draft out of Rutgers. Playing behind behind Janel McCarville, Vaughn saw limited time in her first two seasons. In her rookie season, Vaughn averaged just 4.8 PPG and 2.6 RPG, while shooting 49.3 percent from the field. Her numbers decreased the following year, down to 2.1 PPG in just 8.2 MPG due to the additions of Taj McWilliams-Franklin and Plenette Pierson.

2011 was Vaughn’s breakthrough season. McCarville sat out the year and McWilliams-Franklin signed away to the Minnesota Lynx. This opened the door for Vaughn to join the starting rotation. Averaging career-highs with 28.1 MPG, 10.1 PPG, and 6.7 RPG on 49.7 percent shooting, Vaughn earned the 2011 WNBA Most Improved Player award. That year, the Liberty fell to the eventual WNBA champions, the Fever, in the first round of the playoffs.

In 2012, Vaughn’s statistics would drop slightly. Only starting 17 games for the season, her numbers decreased to 6.4 PPG, 5.0 RPG, on 43 percent shooting. A first round-sweep by the Connecticut Sun would be the end of Vaughn’s time with New York. For now.

In the offseason, New York dealt Vaughn to the Washington Mystics along with the Liberty’s 17th overall pick in exchange for the 7th overall pick (Toni Young). Vaughn would spend the next four seasons in D.C. On January 30, 2017, the Liberty brought Vaughn back in a trade that also brought Bria Hartley to New York while sending Carolyn Swords to Seattle.

In her return season, Vaughn averaged 5.8 PPG and 4.9 RPG while shooting a career-high 53.6 percent from the field. The Liberty advanced to the playoffs, but were again quickly knocked out, this time in a single-elimination game against the Mystics.

Vaughn post similar numbers in 2018. In a rebuilding year, Vaughn’s final season with New York, the team played their home games in Westchester and posted a 7-and-27 record. Through 186 games (9th all-time in franchise history), Vaughn put up 1,092 points and 763 rebounds (6th all-time), while averaging 48.2 percent shooting.

After sitting out the 2019 season, Vaughn sign with the Phoenix Mercury ahead of the 2020 season. On February 5, the Mercury announced Vaughn’s re-signing for 2021.

Tamika Whitmore was the 30th overall pick in the 1999 draft out of Memphis. Whitmore was a crucial addition for the Liberty, adding much needed depth in the post. Following Rebecca Lobo’s injury at the beginning of the season, Whitmore immediately stepped into a large role off the bench. Through 27 games, she averaged 7.9 PPG and 3.6 RPG in 21.2 MPG. This was the season the Liberty reached their second WNBA Finals, losing again to the Houston Comets.

Due to the retirement of Kym Hampton, Whitmore started half the games in the 2000 season. Though her numbers remained relatively similar, she saw a slight increase in her scoring (up to 8.7 PPG). In that postseason, Whitmore started all seven games. Reaching the WNBA Finals, Whitmore put up 11.6 PPG while shooting 47.7 percent from the floor. Once again, the Liberty failed to overtake the Comets, this time stumbling to a two-game sweep.

For the 2001 season, Whitmore saw an increase in her minutes (23.5), but her PPG fell to 7.1 while she pulled down just 3.0 RPG. That year, the Liberty fell to the Charlotte Sting in the Conference Finals, two game to one.

2002 wound up as Whitmore’s best season with New York. Starting in all 32 games alongside Tari Phillips, she compiled 12.7 PPG and 4.4 RPG on a career-high 47.7 percent shooting. The Liberty advanced once again to the Finals; during that eight-game playoff run, Whitmore averaged 16.1 PPG on 54.8 percent shooting. This time, it would be the Los Angeles Sparks that swept the Liberty, continuing the franchise’s title drought, which persists to today.

In Whitmore’s final season with New York, she scored 8.2 PPG, secured 3.7 RPG, and swiped 1.1 SPG in 33 games. The Liberty failed to reach the playoffs. Through 156 games, Whitmore brought in 1,394 points, 561 rebounds, and 98 blocks (8th all-time). Her art of getting to the free throw line also paid off. Whitmore ranks ninth all-time in free throws made (305) and eighth all-time in free throw attempts (446).

Whitmore signed with the Sparks as a free agent in 2004. She would spend two seasons in Los Angeles before signing with the Fever. In her first year there, 2016, she was named an All-Star. Following her 2007 season, Indiana dealt her and the 12th overall pick to Connecticut for Katie Douglas. Whitmore spent two years with the Sun before being bought out ahead of the 2010 season. Due to ongoing injuries, Whitmore retired from professional basketball and is now the CEO of 3sixty. Whitmore is also a maintenance supervisor for the Durham School District in Memphis, TN.

Kym Hampton was the fourth selection of the 1997 Elite draft out of Arizona State. After graduating in 1984, Hampton played 12 years overseas in Spain, Italy, France, and Japan. When the WNBA formed in 1997, Hampton entered her name into the draft. In her first season with the Liberty, she averaged 9.8 PPG and 5.8 RPG on 47.4 percent shooting. Alongside Rebecca Lobo inside, the Liberty were pegged early on as having one of the best post duos in the league. In her two playoff games, Hampton brought in 13.5 PPG and 13.5 RPG before New York lost the Comets in the inaugural Finals.

In 1998, Hampton’s numbers remained relatively similar despite an increase in her minutes. With New York failing to reach the playoffs, Hampton’s primary focus was a return to the postseason.

Starting in all 32 games for the 1999 season, Hampton again posted similar numbers from the previous season. However, she continued to see an uptick in her minutes due to Rebecca Lobo’s season ending injury in the season opener. With the addition of several key players to their roster, the Liberty again advanced to the WNBA Finals once again (as mentioned above). On this run, before the eventual loss to the Comets, Hampton averaged 8.8 PPG, 7.8 RPG and 1.2 BPG. Following the Finals, Hampton announced her retirement.

Through 90 games, Hampton put up 840 points, 523 rebounds, and 52 blocks. Though only have played three years, all with New York, Hampton was a key factor in the Liberty reaching the finals in 1997 and 1999. In 2011, to celebrate their 15th anniversary, the Liberty introduced the Ring of Honor. Hampton, along with Lobo, Vickie Johnson, Teresa Weatherspoon, and Sue Wicks, were the first five members inducted.

Following her retirement from professional basketball, Hampton has pursued modeling, acting, and singing. Hampton has continued to be a brand ambassador for the Liberty and has sung the National Anthem multiple times. In 2012, she was part of an ABC daytime show called “The Revolution,” which lasted for one season.

Missed any of the previous series?

The final part in the series will be revealed the week of September 7.