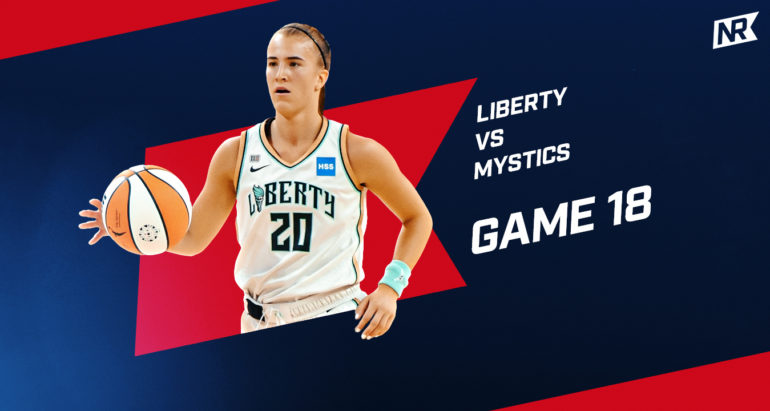 The New York Liberty overcame a 20-point deficit and a scary injury to topple the Washington Mystics.

Much like Will Smith before them, the New York Liberty came through with fireworks on Independence Day weekend.

Betnijah Laney led the way with 19 points, assisted by a combined 28 off the bench from Jazmine Jones and Reshanda Gray to give the Liberty (9-9) an 82-79 victory over the Washington Mystics on Saturday afternoon at Barclays Center. New York overcame a deficit that ballooned as high as 20 in the third quarter, becoming the first WNBA team to come back from at least 20 points behind since 2019. The Liberty also won in Brooklyn for the first time since May 24.

The Liberty and Mystics will meet for the final time this season on September 17, the Liberty’s scheduled season finale.

A fair amount of hype surrounded the return of Tina Charles, who returned to New York City in a color other than seafoam for the first time since August 2013. Charles had always made her desire to play more regular season games in Barclays Center well-known and finally got her wish on Saturday. The arena on Atlantic Avenue is a stone’s throw away from Charlie’s Records, the soul and calypso music store owned and operated by her father, Rawlston. It served as the subject of her directorial debut that premiered at the Tribeca Film Festival.

Charles, the all-time leading scorer in Liberty history, was warmly welcomed in her return to the Borough of Churches. Fans applauded as she was introduced and a tribute video shown after the end of the first quarter drew further praise. When play resumed, Charles was her usual, dominant self, earning 31 points and 16 rebounds.

The Liberty, however, got the last laugh. They got their comeback started by holding her to 3-of-9 shooting in the third quarter (which they won 23-15) and forced her into an offensive foul on Washington’s penultimate possession that allowed Laney to sink the sealing free throws with under two seconds to go.

Modern Liberty representatives professed their respect for Charles after the game.

“This is her team… She paved the way for a lot of us to be here,” Jones said. “When they called her name out in the starting lineup, I (told the team), it’s going to get loud and it did get loud. Then the tribute video, all of that was great.”

Charles (Too Much) In Charge

If Washington makes the playoffs (currently a half-game behind Phoenix for the final spot), Charles will undoubtedly linger in the MVP conversation. Even if they miss out, Charles’ comeback season after a 2020 opt-out is a marvel to behold. She owns a four-point lead over Jonquel Jones for the league’s best scoring average and Saturday marked her seventh 30-point effort this season. The first came during the team’s first meeting in the nation’s capital when Charles had 34 in a 101-72 Mystics win.

But, from a Washington standpoint, Saturday was the definition of having too much of a good thing. While Charles dominated the box score’s points column, no other Mystic reached double figures.

“If Tina (got) 30 and we didn’t let anybody else score in double digits, we were going to be okay,” Jones noted. “That’s what happened in the first game. We let everybody else get off plus [let] Tina get off. That was just a bad combo.”

Saturday’s win was a bit of an emotional affair due to a third quarter incident. As the Liberty started to inch their way back into the game, DiDi Richards was lost to an injury that required assistance to leave the floor. Richards returned to the bench but was ruled out for the remainder of the game with a neck sprain.

Jones, Richards’ close friend, was willing to bet that the rookie would be ready to go for the Liberty’s next game on Monday night. But considering what Richards went through at Baylor (a spinal cord injury that nearly ended her hardwood career), such an injury can never be taken lightly.

With Bec Allen missing her third straight contest, Hopkins had planned to feature Richards in a larger role. Though the injury limited her to only five minutes, Hopkins said he liked what he saw.

“I think DiDi was poised to continue to contribute the way that she always does with her effort and energy and physicality,” Hopkins said. “I was going to make a point to get DiDi more minutes tonight; we were on the road to doing that. Her energy and effort is like one of the most consistent things we have on our team.”

“I’m really proud of DiDi, I wish we could have seen more of her tonight. I think she was poised to have a pretty big game.”

Hopkins had “no official diagnosis” on Richards’ status in the immediate aftermath.

When Richards went down, she was attended to by not only team trainer Terri Acosta but also Jones. The two had quickly built a strong metropolitan bond and have become well-known for their energetic bench celebrations over the first half of the season. Jones remained on the floor sitting next to her fallen teammate and later helped her to the sidelines with Acosta.

The Louisville alumna nearly fell victim to a similar incident shortly after Richards’ departure. While diving for a loose ball on a Liberty possession, she flipped head over both the Washington bench and a bar behind it, going over the latter head-first. She popped up immediately and later tallied five points over the next two New York possessions, helping trim the Washington lead from 18 to 10 by the end of the frame.

True to form, Jones brushed off the incident through a combination of energy and humor.

“I’m thinking, I say all right, I’m going full speed. I can’t stop myself because if I stopped myself, I’m probably going to end up hurting myself,” Jones said of the play, intending to through the ball back in-bounds between her legs. ‘You see the chairs, make sure you step on the chairs cautiously, don’t go in the chairs…and then I saw the rail, I said ‘f***!’

“I’m just glad I saved myself, and I wasn’t hurt after that. I’m just glad I’m athletic and very acrobatic, I need to be in Tokyo. I’m doing gymnastics. That’s what my team said.”

Jones ended the afternoon with a season-best 17 points, hitting four of her last six shots from the field after missing her first three. Her breakout couldn’t have come at a better time. After all, she became a New Yorker through the 12th overall pick of the 2020 WNBA Draft, a pick obtained through the Tina Charles trade with the Mystics.

Sabrina Ionescu’s return from an “overuse” injury saw her contribute to the box score (5.5 rebounds and 5.3 assists over her last four games), but she struggled to regain her shooting touch. Saturday was a notable return to form for the touted top overall pick.

In what Hopkins described as a “vintage Sabrina” performance, Ionescu sank six of her seven shots from the field. A triple just beyond the four-minute mark in the fourth gave the Liberty their first lead since the opening frame. She would then help give the Liberty the lead for good on a flashy pair of assists to a cutting Reshanda Gray in the waning minutes of the contest.

Ionescu is still restricted to around 25-minutes per night, but it’s safe to say she made the most of her opportunities through 15 points, five assists and five rebounds. New York is now 4-0 when Ionescu shoots at least 50 percent from the floor.

“When she’s a playmaker down the stretch and she’s looking to create her own shot and create for other people, it’s just a game-changer,” Hopkins said. “She’s setting up the ball screens better, she’s not coming off straight up. She was more aggressive tonight, not letting any hard shows and physical defense bother her as much. I just thought that she really came out and adjusted and looked like herself tonight.”

Back on her fifth term in New York—this one on a full-time basis—Reshanda Gray kept her strong pace going, tallying 11 points and six rebounds. Though she fouled out (picking up three fouls in a third quarter that saw Liberty fans disapprove of officiating), Gray made things more difficult in the Washington interior. Her cutting abilities fit in perfectly in the speedy system Hopkins is trying to implement, and they came through huge during Saturday’s final stages.

“In the fourth quarter, the rolls were wide open, and she was able to get some easy baskets,” Ionescu noted of their collaboration. “Her willingness and desire to be the best that she can and find ways to continue to improve and be coachable is really what makes her her. It helped us win down the stretch (today).”

Back in the New York Groove?

After years of wandering the WNBA wilderness, the Liberty enjoyed a game that felt extracted from a sports movie: they won on a holiday weekend, a former legend in town and suiting up against them. The future beat the past, using weapons acquired from dealing away the past.

“I would say that coming back from an 18-point deficit, coming back from a really flat start and finding a way to actually close that game out, not just comeback, cut it to two when we just didn’t have the gas at the end…they found a way (to win),” Hopkins noted. “The fact that they know they can do that, the more often that they’re able to do that. They really can start to believe in their capacity to close out gains. And so I think from a long-term perspective, that’s really big.”

Up Next: The Liberty will partake in the penultimate home game of their pre-Olympics slate on Monday night, battling the Dallas Wings at Barclays Center (7 p.m. ET, YES). New York and Dallas previously met in the aforementioned tilt on May 24 at Barclays Center, with the Liberty earning an 88-81 triumph.
Geoff Magliocchetti is on Twitter @GeoffJMags