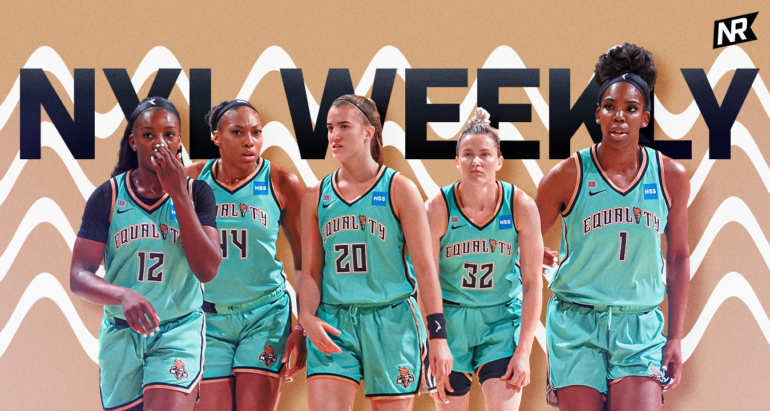 NYL Weekly: Liberty off to 2-0 Start, but Competition Amps Up This Week

Matching your previous season’s win total: all in a weekend’s work.

Look, I’m still feeling tentative about leaning too much into passionate New York Liberty fandom, even after the opening weekend they had. But between that Sabrina go-ahead three to break in their Barclays Center tenancy to an explosive first quarter on the road that kept them in a hard-fought defensive effort, New York fans have been treated to some star outings in this young season. The Liberty’s home-and-home season-opening sweep over the Indiana Fever marked their first 2-0 start since 2016.

(Sidebar: If you want to know, the Liberty lost their next three games in 2016 and finished 21-13. Finishing with more wins than last season’s 20-loss total would still be a massive achievement, for what it’s worth. Funny enough, the last time the Liberty started 3-0 or better was in 2007, a season where they finished with a losing record and fell in the first round of the playoffs. Makes you think!)

I’ll get more into the minutiae of last weekend’s games below—and set up this week’s contests—but for now, can I just say: Who knew a human could experience that many emotions watching 80 minutes of basketball between the same two recently bottom-rung teams?

“Sabrina Ionescu did that. She just completely did that.”

I’ve been thinking about any possible ways the season opener could have been scripted better. Maybe if Sabrina Ionescu’s three-pointer in the waning seconds was a true buzzer-beater, rather than a 0.4-seconds-left-beater? Maybe if it had been a team better than the Fever, perhaps making the win feel like more of a triumph than a relief?

You know, all things considered, I’m ready to throw in the towel: Friday’s game could not have been scripted any better. Sabrina Ionescu, No. 1 pick for the ages, in her return from an injury that saw her miss most of her rookie season, hit the game-winner in dramatic fashion to close out the team’s first official home game at Barclays Center. That sounds pretty good to me.

We also saw Reshanda Gray and Joyner Holmes take the court and see some valuable time (though Holmes was waived for the second time this week between this weekend’s games—reason forthcoming). There weren’t that many bench points, though, which I personally feel like could spell trouble down the line!

“Facing off against a Demogorgon,” or, Sunday’s swift reality check

Same team, same Tea(ira McCowan)m. Facing a team with that much height down low hurt the Liberty in their opener, and since they added a guard to the roster between games—Rebecca Allen, back from overseas, taking Holmes’ place—that trend continued.

A 31-18 first quarter saw the Liberty well on their way to another strong offensive outing. Unfortunately, the second quarter then happened (17-10 IND), and then the third (17-14 NYL), and for some reason, the fourth (16-15 IND), and suddenly New York’s entire lead consisted of the remnants of its opening-frame outburst.

Why did the offense peter out? Maybe the Liberty were so shocked by their stellar defense that they didn’t think they needed to score many more points. Or maybe it’s the much more reasonable assumption that when you turn the ball over 22 times, you might not get many chances to score. In better scoring news, though, new acquisition Betnijah Laney is averaging 25 points per game to open the season, and rookie Michaela Onyenwere’s first two career games both saw her reach double figures.

Remember last season, when the WNBA compressed a 22-game season into just over two months? The Liberty open this week with their third game in five days, though the next two follow a luxurious two-day break (filled with traveling).

But before hitting the road, it’s a return to greener (seafoam-er?) pastures. New York plays in Barclays Center again tonight, the site of its first win of the year. The best part? The Liberty remain more or less intact from that game, with the exception of the Holmes/Allen switcheroo. If you believe in the holy power of momentum, a win Tuesday would offer a lot of it as the team prepares for a tough road trip.

It’s too early in the season to make massive predictions about how these games will go, in my honest (and, frankly, under-informed) opinion. But the Sky looked good in their opening win, and playing them at their home will tell us a lot about how good the Liberty really could be. (Emphasis on their home. We all remember that perhaps the Liberty’s best game of last season came against Chicago … albeit in the fanless wubble.)

Personnel-wise, we still may not see Leaonna Odom this week due to her (again, mild) Achilles injury. Odom’s status has been upgraded to “doubtful” from “out,” though, so perhaps there’s hope yet for a speedy recovery. We’re also seeing some movement that’ll bring more experience to the team. Kiah Stokes is now on the active roster (sadly, this means Gray was released), while Natasha Howard is back from her overseas commitments and could see the court soon.

Jazmine Jones clarified the spelling of her name:

And Onyenwere commented on the rigors of the WNBA schedule … which prompted her old UCLA teammate, three-year WNBA vet Jordin Canada of the Seattle Storm, to step in with some advice and encouragement: