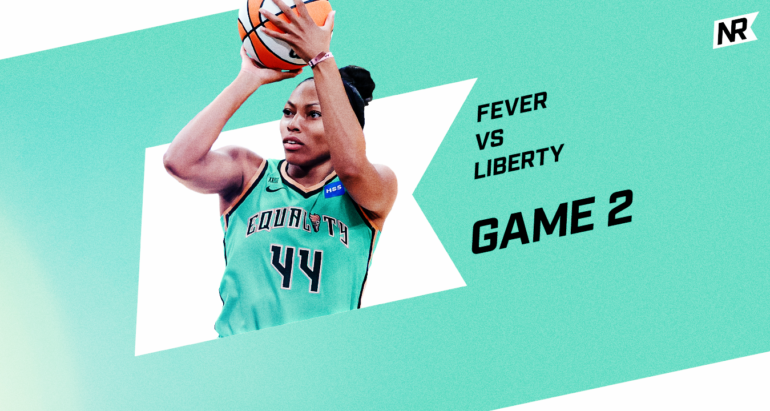 After Friday night’s thrilling 90-87 finish, in which Sabrina Ionescu’s last-second three felled the Fever, fans across the WNBA were ready for Sunday afternoon’s encore. This time around, the Liberty made strong adjustments and, coupled with a strong scoring start, controlled the game nearly the entire way through.

New York’s fast start staked them to a 19-point lead in the second quarter. That allowed them enough cushion to withstand a scoring drought of 10:01 (longer than a full quarter!). They never let Indiana close the gap to a single possession, with a momentary four-point gap being the narrowest margin. The final buzzer represented the Liberty matching their win total from 2020—though it took 20 fewer games this time around.

Below, we’ve got three key takeaways from Sunday’s 73-65 win.

The Battle of the Boards

Friday night’s result was much tighter than it would’ve been if not for rebounding. The Fever controlled the boards totally, attacking the offensive glass with the intensity of Eleven facing off against a Demogorgon. (This will not be the only Stranger Things reference I make in this recap.) In the opener, Indiana secured 45 rebounds—including 19 on the offensive glass—to New York’s 28. Ahead of the rematch, I asked head coach Walt Hopkins about his takeaways after absorbing the game film. His response was pointed:

While we don’t know whether or not Hopkins actually spoke to the referees, the game played out much differently than the high-scoring frenzy fans were treated to on Friday night. The refs called 12 offensive fouls, including two apiece on the fearsome Fever frontcourt of Teaira McCowan and Jantel Lavender. On Friday night, the pair accounted 15 offensive rebounds; in Sunday’s matinee, they combined for just five. As a team, Indiana didn’t secure its first O-board until the second quarter.

Something else that helped? The guards and wings crashing down to help. Sami Whitcomb (6), Ionescu (5), and Rebecca Allen (5) all made strong impacts cleaning the defensive glass and preventing further scoring attempts. Across the entirety of the contest, the still-undersized Liberty managed to close the rebounding deficit to just two, 40-38. That passes for a win, especially after Friday night’s lopsided totals.

After the game, Ari Chambers asked Hopkins which player has impressed him most so far this young season. Here’s his full response:

“I think the box scores don’t say it, but I think Sami Whitcomb has been invaluable. The things she says to the team … it’s one thing for Shelley [Patterson] and I, we have that championship experience with Minnesota. It’s another thing for a player who’s just won a championship, [has won] two championships, to talk about what it needs to look like on a daily basis. To talk about, ‘Hey, we’re up by more right now going into the fourth quarter than we were at half,’ and everyone [had] felt so deflated because we were only up seven.

While Whitcomb’s reputation is as a three-point shooter with a quick release, her playmaking and effort deserve attention, too. In the first two games, she’s showed off exactly the type of blue-collar play Brooklyn fans will love: fighting over screens, diving for loose balls, jumping passing lanes.

This sequence in particular epitomizes the effort exerted every moment on the court. First, she makes the extra pass for a corner assist. Then, she grabs a rebound in traffic and immediately finds Reshanda Gray (another player Liberty fans already love) streaking down the court for another assist. She’s not done yet, though. Next defensive possession, she’s chasing the action from sideline to sideline, eventually diving on the floor to force a Danielle Robinson turnover. Invaluable.

The Defense We’ve Waited For

First thing’s first: despite surrendering 87 points, the Liberty put forth a strong defensive effort on Friday night. Indiana’s 42 percent shooting would’ve ranked 10th among teams in the Bradenton bubble last year. If you account for the fact that New York gave up a dozen or so putbacks, those numbers are even more impressive.

Which brings us back to Sunday’s game. Indiana hit just 25-of-77 attempts from the field, converting just 32.5 percent of their looks. Lavender (4-of-7) was the only player on the Fever to hit more than half her attempts, and McCowan scored just six points. McCowan’s frustration, in particular, showcased the adjustments New York’s staff implemented over the last couple of days. The team threw all kinds of looks at her and did whatever they could to prevent her from getting easy one-on-one opportunities in the paint.

The culmination of McCowan’s stresses in this contest? Big T had two big Ts called on her. The technical fouls made her appearance in part two a shorter one, not unlike that of Sean Astin as Bob Newby on Netflix’s Stranger Things. (Sorry, I warned you.)

I stitched together some of the different looks New York brought to turn McCowan’s box score … Upside Down. (Okay, now I’m done. Promise.)

Some Other Interesting Things