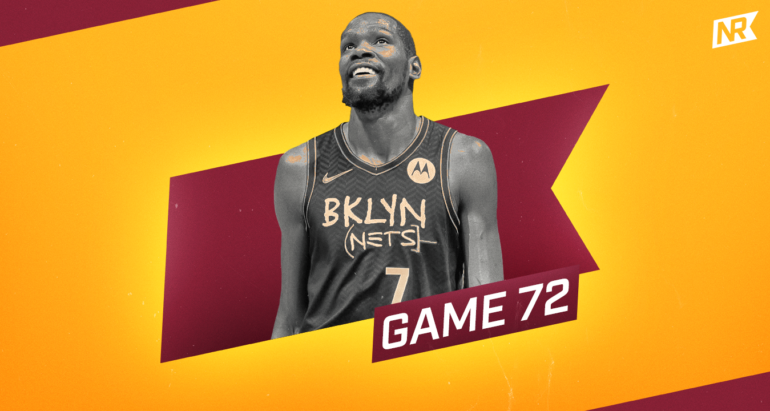 After a win just over 24 hours prior, the Brooklyn Nets entered Sunday evening’s season finale against the shorthanded Cleveland Cavaliers with a few interesting storylines. One was the fate of the No. 2 seed in the upcoming playoffs.

Well, the Nets didn’t have to worry about that, as the game was pretty much in hand from the opening tip. Even James Harden being a last-minute addition to the injury report didn’t stop Brooklyn from taking care of business. Led by a strong first quarter and a highlight-fueled second quarter, the Nets cruised to a 123-109 victory over Cleveland.

Here are three takeaways from Brooklyn’s final tune-up before the playoffs:

Unlike Saturday’s outing against the Bulls, Brooklyn was locked into this one from the opening tip. The game against Chicago saw the Nets start the game on the wrong end of a 12-0 run.

Sunday, however, Brooklyn started out the game on a 17-4 run and led by as many as 17 that quarter. Kyrie Irving, who came into the game on the cusp of a 50/40/90 season, scored eight quick points, including two three-pointers. Although Kevin Durant only shot the ball once, he collected five assists during his eight-minute stretch in the opening frame. Landry Shamet and Bruce Brown connected on a few shots as well.

Obviously, without Harden, this isn’t the starting lineup we’ll see during the playoffs. But the mentality of starting a game with urgency remains the same. Yes, Brooklyn has the offensive firepower to come back against anyone—but why make life harder?

Welcome to the Club

An achievement that has only been reached by eight other players in NBA history, Irving joined the incredibly exclusive 50/40/90 club as Sunday’s final buzzer sounded.

For those unaware, the 50/40/90 club refers to a players’ shooting averages: respectively, field goal percentage, three-point percentage, and free throw percentage. Irving has flirted with this trio of averages all season and entered Sunday’s game just slightly under the 40 percent mark for three-point shooting. Nets fans were probably more focused on this accomplishment than Irving was, and undoubtedly were on the edge of their seats with each shot attempt. Well, Irving didn’t disappoint, connecting on 7 of his 11 total shots, including shooting a perfect 3-for-3 from beyond the arc.

Across Twitter, you could see Nets fans doing the calculations and updating the Twittersphere of where Irving’s percentages were. For the season, he officially finished with averages of 50.6/40.2/92.2. In a year that saw Irving ridiculed and called every name in the book by media and NBA fans, the fact that he not only had his best scoring season, but also joined the illustrious 50/40/90 club, has to make everyone happy.

Since it’s the last game of the regular season, the third takeaway from the game will be a slew of highlights. The first is Mike James taking flight on a fast break, something we haven’t really seen during his short tenure with Brooklyn:

The second will easily go down as the highlight of the year for Brooklyn, which came a few minutes later that quarter. Off a helter-skelter play, the ball somehow wound up with Blake Griffin, who tossed it up court behind his back to Irving, who shoveled it to James, who then threw it off the backboard for a Durant slam:

It had everyone in the arena on their feet and brought back memories of those old Nets teams, where Jason Kidd threw lobs off the backboard to Kenyon Martin and Richard Jefferson.