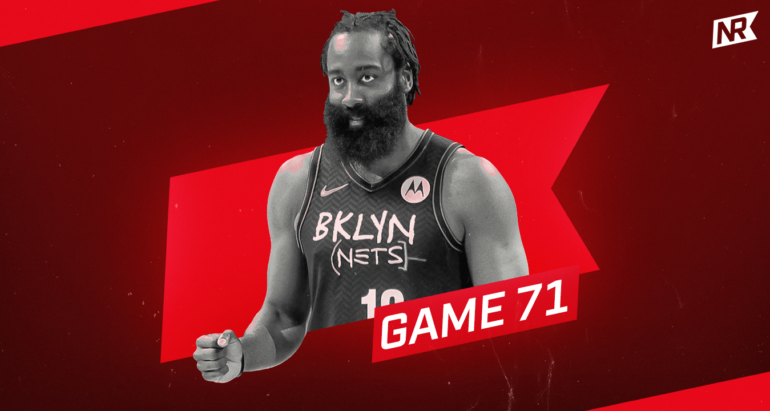 In the return of the Brooklyn Nets’ “Big 3,” the team overcame a slow start and some poor shooting to take care of business against the Chicago Bulls on Saturday, 105-91. As the Nets adjust to playing with an almost fully healthy roster, the regular season is winding down. Sunday’s contest against the Cleveland Cavaliers marks the finale of a season unlike any other in Brooklyn and NBA history.

With that in mind, this game serves as one of just a few points of evaluation for the Nets’ “Big 3” of James Harden, Kyrie Irving, and Kevin Durant heading into postseason play. There’s much to consider and ponder with regard to big picture implications. But, for now, here are three takeaways from the much-needed, comfortable win over Chicago.

While the image of Harden, Durant, and Irving on the floor all together was a sight to behold, both Harden and Durant struggled to produce offensively for much of the contest. Combined, the two of them shot 6-for-21, scoring just 17 combined points. Granted, they made their presence felt in other ways. Durant dished out 6 assists and grabbed 9 boards, while Harden added 7 dimes of his own along with 5 rebounds.

But if one is assessing the compatibility and performance of the “Big 3,” their performances stick out like a sore thumb. Fortunately, three role players in Nic Claxton, Bruce Brown, and Jeff Green made up for the issues that the stars had. In fact, the bench unit as a whole shot 18-for-31 (58.1 percent) from the floor to keep the offense afloat in quieter stretches from the “Big 3.”

Green in particular provided much-needed offense in the second half, scoring 19 points on 7-of-8 shooting and a critical 5-of-6 from behind the arc. The Bulls felt his presence as both a floor spacer and a threat to drive to the rim as he slammed home a pair of emphatic dunks and kept the defense honest with his now-elite perimeter shooting.

Meanwhile, in 25 minutes, Claxton had a phenomenal defensive performance against Chicago’s Nikola Vučević. Holding the Montenegrin to 10 points on 4-18 shooting and 0-10 accuracy from deep, Claxton put the straps on the former Orlando Magic star all game long. He also added 10 points and 8 rebounds of his own.

Starting alongside the “Big 3,” Brown played a quintessential Brown game, scoring 16 points in a variety of ways. He also corralled 12 rebounds and was a differencemaker in just about every way possible.

While the issues Brooklyn’s stars had were the focal point of the game, the complementary outings from the Nets’ role players are encouraging. Those guys will continue to see better opportunities with so much attention heaped on the three superstars.

Irving Carries the Offense in the First Half

Of course, whereas Durant and Harden struggled to score, Irving had no such trouble. Doing most of his damage in the first two quarters, the guard netted 22 points in 30 minutes on 9-of-16 shooting. He thrived both as a shooting guard playing off Harden and in his own element without either of the other two stars on the floor.

Really, Irving dug Brooklyn out of its early hole. Starting slow has been a chronic issue for the Nets this season, and it reared its ugly head again against the Bulls as Chicago got out to a 12-0 lead after just two minutes. But, behind Irving’s ridiculously well-rounded scoring ability, the Nets pulled themselves back into the game before taking the lead for good midway through the second quarter.

There may be questions and unknowns with regard to Harden, Durant, and Irving’s compatibility on the floor together. But what should never be doubted or discounted is the flip-of-a-switch, immediate impact scoring capability that each of these three has. Irving’s was on full display today against Chicago as he took on the role of carrying Brooklyn’s offense while the other two failed to find their rhythm. Hopefully, with three guys who can produce like that, the Nets shouldn’t ever be completely lost offensively.