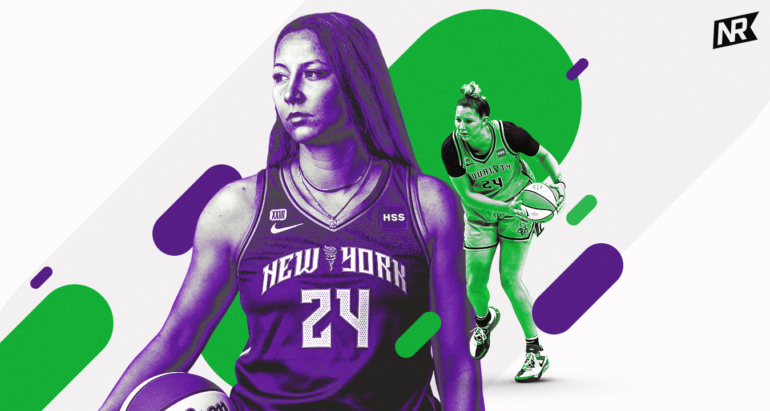 New York Liberty sophomore and newly-minted starter Kylee Shook is taking on a bigger role in the paint.

The missing pieces in the New York’s Liberty’s rebounding situation have literally left them Shook … Kylee Shook, that is.

That’s not a bad thing by any stretch of the imagination. Shook has made herself into the best-developed paint presence that’s currently available for WNBA action. That will include Sunday’s affair in Indiana (2 p.m. ET, CBSSN), where the Louisville alumna looks to make the starting group again. It comes just two days after she did so for the first time in her career for Friday’s 90-87 victory over the Indiana Fever.

It’s quite the career path for Shook, one of the Liberty’s latter picks in their 2020 draft splurge. The team selected her in a position that hardly guarantees a roster spot in a player’s first year (No. 13 overall), never mind starting duties in a second. But with the debuts of tenured interior threats Natasha Howard and Kiah Stokes undated, and Amanda Zahui B. traded out west, the role in the first five appears to be hers.

Howard and Stokes completing their international duties leaves Shook and hardship signee Reshanda Gray as the most prominent rebounding threats on a Liberty squad centered on the fearless shooting endeavors of their guards. It’s a task that Shook has welcomed with open arms. Knowing that Howard and Stokes would arrive late, Shook told reporters that she upped her aggressiveness leading up to opening weekend. She even arrived early to get some preseason training sessions in with head coach Walt Hopkins.

“Aggression, being strong with contact, just making contact with my body was really a big focus on defense, moving my feet,” Shook said of her training camp goals. “I feel like I can still do better, but that’s hopefully what season is for … the main thing for me is probably getting into game-like situations again because I haven’t been in one since September.”

Shook got all of that and then some on Friday night in Brooklyn. Interior duties centered on finding a way to neutralize the Fever’s Teaira McCowan, best known for sending Liberty fans home disappointed after the 2019 opener in Westchester County. McCowan’s game-winning basket set the tone for an unpleasant season in the standings.

Results of Friday’s tall task weren’t pretty in the final box score, as McCowan put up 23 points and 16 rebounds. But Shook was willing to throw her body around in the paint, earning 3 rebounds. She also connected with Sabrina Ionescu on an attractive pick-and-roll and put up eight shots, one short of her infantile career-high.

Hopkins noted the moral victory of further development in his postgame statements.

“I thought Kylee gave us really good minutes. She played her butt off,” he said. “I thought there were a lot of possessions where she was kind of getting caught between stopping the ball, and we were getting hit on those screens a little bit, and then getting back behind McCowan. [McCowan] was just able to get deep position, she’s just a handful, she’s really good.

“I thought, all things considered, Kylee did a pretty darn good job.”

Shook’s resilience against McCowan can work very well in her new role as a veteran mentor of sorts. One of the most common tropes of training camp was newcomers praising Shook for helping them out in new surroundings. Rookie Michaela Onyenwere mentioned that her former teammate on the Colorado AAU circuit was “always in [her] ear,” for example.

It might be a bit of an unusual position for a second-year, second-round pick to work through, especially with the Liberty adding several other veteran talents over an eventful offseason. But the role of mentor and de facto elder stateswoman is something Shook loves working through.

It also plays into the one thing she wants her new Brooklyn fanbase to know about her.

“I would just say I’m loyal, I’m very kind,” Shook said. “You can say anything to me and I’ll always be there if you have a question or anything.

“I think it’s a confidence boost hearing that I’m actually helping people … One of the biggest things Walt invests in is communication. So, I try to carry it over and I’m comfortable.”

Right now, the Liberty have questions when it comes to their rebounding. Shook, true to form, is looking to provide an answer.