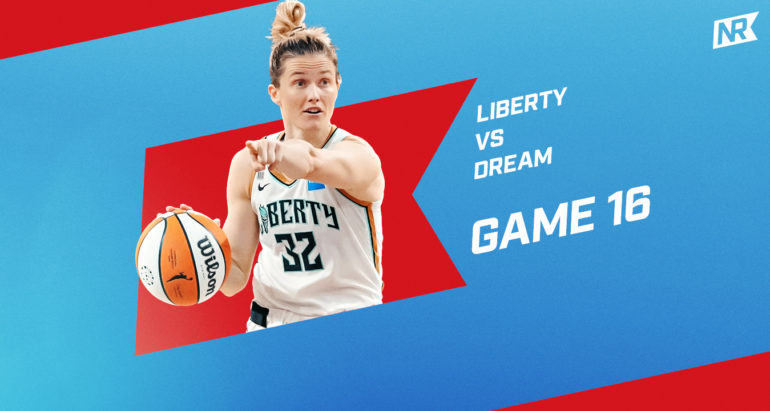 Fresh off two straight losses to the Chicago Sky (and with two straight losses to the Aces not too far in the rearview mirror), the New York Liberty were in need of a resounding win to gain some momentum and build some morale. Knowing this gave the Liberty all the motivation they needed to go out on the road and get perhaps the team’s most complete victory of the season over the Atlanta Dream, 101-78.

“I think it was good for us,” Betnijah Laney told media after the game, “We need a win. After the past few games, [the win] just showed what we’re capable of when we come out, focus, and execute our game plan.”

Leading from the opening tip to the final buzzer, New York came out with a resounding victory, coming out strong and never wavering in the consistency of that effort. Looking broadly at the stats, there’s a lot for the team to be proud of.

The Liberty offense worked to perfection, breaking 100 points for the first time this season. They were bolstered by a career-high 30 points from Sami Whitcomb (more on her in a moment), as well as 28-point performance from steady scorer Betnijah Laney. This game also marks the first time since way back in 2018 that the New York Liberty won a game by 20 or more points, a reflection of their much improved defense against Atlanta, especially after last time out. In fact, let’s talk about that some more:

The Liberty Figured Out How To Stop Courtney Williams

After the Liberty’s last game against Atlanta, a 90-87 loss back on May 29th, my colleague Justin Carter started his recap by pointing out the team’s difficulty containing Atlanta Dream guard Courtney Williams on offense. Williams went off for 31 points in that game, in large part due to the Liberty consistently going under ball screens and giving her too much room to operate on offense.

“One of our focuses coming into the game was definitely containing her,” said Michaela Onyenwere post-game, “With the game she had the first time we knew we had to pressure her more, and not let her come freely off of screens.” The Liberty were able to execute that game plan to perfection, guarding Williams tight off of screens and holding her to just 12 points on 17 field goals attempts, or 29.4%. Just take a look at this play, where [describe and pick a play]

“We navigated on ball sets way better than we did [last time] in New York,” Sami Whitcomb said after the game, “We did a good job of contesting over and making sure we didn’t give them too much room off screens. Our pick and roll defense was way better, we did a better job of locking in and not letting [Courtney Williams] get loose.”

Well, I couldn’t have said it any better myself. Speaking of Sami Whitcomb…

After Rebecca Allen was ruled out of the game minutes before tip-off, every player on the team knew they would have to bring that much more energy and focus from the jump to secure the win. “All of us needed to step up and carry that load,” Sami Whitcomb said after the game, “We just wanted to work hard, and get this win. And we did.”

What Whitcomb, ever the modest team captain, failed to mention in that quote is just how much of that ‘stepping up’ came from her individually. She came out of the gate strong, scoring in double digits in each of the games first two quarters and matching her career-high of 22 points by halftime. The Liberty themselves only had 43 points total by halftime as an entire team. That’s right: Sami scored over fifty percent of her team’s points in the first half of the game. The impact of her early effort, both in terms of establishing the league and in terms of setting an example for her teammates, cannot be understated. “She definitely gave us the momentum we needed,” said Betnijah Laney, “She came out strong, and finished strong as well. For her to lead the way and have that first-half performance she did, it made us all follow suit.”

To put it frankly: Sami Whitcomb was an absolute flamethrower last night. She ended the game with 30 points, a new career-high. Her shooting efficiency jumps right off the box score too, hitting 10-16 of her shots from the floor, and 7-12 from three-point range. She played with such nonchalant, workmanlike confidence, it looked like every single shot she took was going to go in. And honestly? Most of them did, even this [shot with a hand in her face]

[Pull a Sami three if the WNBA ever lets me in]

Asked after the game if anything special went into her preparation for this game, Whitcomb again opted to speak about the team first, a testament to her approach to the game. “We stayed true to what we’ve been doing, and got back to what was working well for us. Slowed down, made good reads, and shared the ball well,” Whitcomb said post game. “I wasn’t trying to prove anything. I was just trying to play my game and relax into it.”

Rebounding helps the Liberty bounce back

A big part of this win came (as the cliche goes) not on the scoreboard, but on the backboards. Usually on the losing end of the rebound differential, New York was able to flip the script against Atlanta on Saturday, out rebounding the Dream 36-25 on the night. A big part of this came from Kylee Shook’s efforts on the boards, in double digits once again. Filling in for Natasha Howard at the starting center role for longer than she would have expected to, Shook has at times struggled to put her body on the line and be physical when rebounding this season But that part of Shook’s game has really come along these past few games,&nbsp;

“We’ve been watching a lot of film,” coach Hopkins said asked about&nbsp; “Not only of [Kylee Shook], but of other rebounders who are really effective. We’ve been studying what works for them.” Hopkins went on to say that Shook took her film study assignments seriously, and quickly took the lessons she derived from them to heart. “Kylee’s really applied what we’ve shown her. She just went out and did it.”&nbsp;

Of course, Shook wasn’t responsible for last night’s rebounding success all on her own. The Liberty’s backcourt showed great hustle in chasing down loose balls and cleaning up the glass when they were called to. Sami Whitcomb and Sabrina Ionescu had 6 boards each on the night. “I think our guards really hunted those rebounds, chased them down,” Hopkins said, “With Michaela [Onyenwere] boxing out, everybody else has to get a hand on ball. That’s been something we’ve talked about all year.”