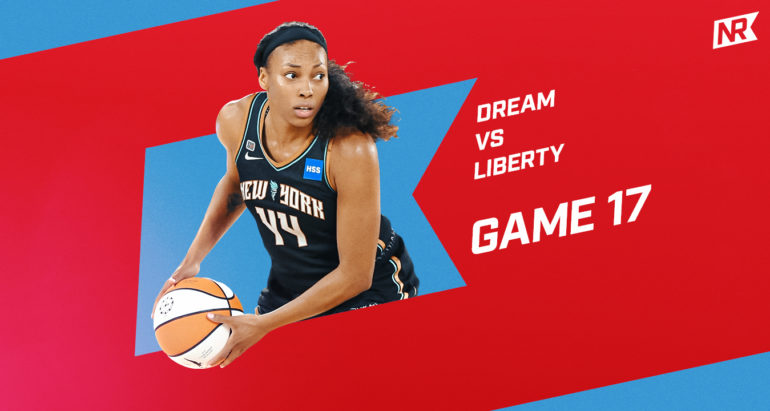 Just days after the New York Liberty trounced the Atlanta Dream to climb back to .500, they failed in their encore performance to win the second of the back-to-back set. It was not a pretty game by either team, the box score blighted by long scoring lulls and missed opportunities. And, in New York’s case, 18 turnovers, an all-too-familiar struggle this season.

It seemed early like this would be Atlanta’s game to lose, as they held New York to just one-of-12 shooting in the second quarter, but even then could only muster a six-point halftime lead. Then late, after battling back to take a four-point lead with 4:02 to go, it seemed like the scales had shifted heavily into the Liberty’s favor. But fortunes flipped again, and they would not score again from that point on, missing a handful of open looks that could have put the Dream to sleep. Unfortunately, none fell, and Atlanta would finish the game on an 8-0 run, with the tie-breaking basket coming on a—stop me if you’ve heard this one before—go-ahead bucket by the unflappable Courtney Williams.

This loss, not unlike the one to the Dream earlier this season, is tough to stomach as the standings continue to shuffle on a daily basis. Ahead of the game, Coach Walt Hopkins knew that Atlanta would come out hungry, especially after losing the first leg of the matchup. “It’s a game of adjustments,” he told Nets Republic. “It’s a mental toughness test… the ability to continue to execute in the face of change, unpredictability, pressure. For our players, consistency is a big part of that.”

In the first quarter, believe it or not, defense seemed optional. The Liberty came out firing, hitting 10-of-16 in the frame, including four-of-six from deep. Atlanta hit half of their 20 looks, but were more aggressive on both ends of the floor, with their four offensive rebounds leading to nine second chance points in the period (New York had zero). The Dream also got out and ran, scoring a pair of fast-break buckets to the Liberty’s zero, and ended the first quarter with a 27-25 lead.

For a majority of the second quarter, it appeared as if the Monstars had snuck into Gateway Center Arena and sapped the talent from the court. It was a forgettable stretch. The Liberty would make only one basket, a layup by Michaela Onyenwere with just over a minute to go before halftime. The Dream hit just five out of their 20 looks in the frame, but couldn’t make enough shots to build a substantial lead, winning the second quarter just 13-9 to bring a 40-34 lead into the break.

The Jekyll and Hyde performance continued in the third, with both teams suddenly hot again, motivated to score by their opponent’s success. The Liberty, off strong play by Betnijah Laney (more on that shortly) and Michaela Onyenwere, trimmed the lead to one a few times, but couldn’t get over the hump. One moment that loomed large: a wide-open missed layup by Neah Odom, who had an otherwise solid performance, which would have given them the lead. The Dream stayed in front due to an 11-point quarter by Courtney Williams, who continued to thrive on transition pull-up jumpers, and the heroics of Crystal Bradford, who scored eight points in the third’s final 81 seconds.

The fourth quarter flipped the switch again, as both teams tightened up on defense (and missed open looks). As mentioned above, New York took a multi-possession lead with just over four to play, but couldn’t hold it. Each team would score just 11 in the final frame to complete the uneven performance.

While a late turnover by Laney drew some focus, Onyenwere was quick to point out after the game that that isolated play is not what cost New York the W. “Over time, turnovers add up and they scored 22 points on our 18 turnovers. Our turnovers at the closing moments did not decide the game, but they [added up.]” Hopkins agreed with that assessment.

The Gravity of Betnijah Laney

All season long, Laney has kept the Liberty in games, and Tuesday night was no different. In this recap, I wanted to highlight just how much her passing created opportunities for her teammates, especially against a team like Atlanta which a) loves to throw extra pressure at ballhandlers and b) knows Laney very, very well after her recent stint with the team.

She finished with a team-high 16 points, even on a rare off-shooting night. (Laney has struggled with her shot from deep of late, hitting just four-of-21 in her last seven games, but it’s worth noting that tonight’s seven-for-19 shooting performance from the field is her first time in that stretch making fewer than 50 percent of her attempts.) To go with her seven helpers, she pulled down five assists and committed the two turnovers Hopkins mentioned above.

Let’s break down each of her dimes:

Assist 1: Just over two minutes into the game, Laney receives the ball on a post-up, a height and strength advantage over her close friend Williams in the post. From the weak side, Cheyenne Parker sprints over to double. Instead of giving up her dribble, Laney retreats out to the corner as Parker’s matchup, Kylee Shook, cuts to the basket. This forces help from Odyssey Sims, who leaves Sami Whitcomb—fresh off a career-high 30-point game—wide open and waving her arms in the far corner. Laney, her head turned to read the defense, leaps over the closing double to skip a perfect pass to the far wing, and Sami does what Sami does, swishing it through.

Assist 2: Later in the first quarter, Laney receives a dribble-handoff from Odom that forces a switch from Bradford. Laney loses Bradford on a quick pump fake and gets to one of her favorite spots on the court: the free-throw line for a jumper. She notices, however, that Shook’s defender, Tianna Hawkins, has slid over to fill the lane and stop a drive, leaving the Liberty’s shooting big alone in the corner. Williams has a choice to close on Kylee or stay with Sabrina Ionescu, just one pass away. She chooses to let Shook shoot—her first attempt from either corner all season—and the shot drops through.

Assist 3: An important bucket here, the only one in that agonizing second quarter. Here, we see a high-low action, with Shook at the top of the key. This time, Williams is fronting Laney, so Shook lobs the entry over the top. Monique Billings crashes from the far side to cut off the easy bucket. Here’s an example of Onyenwere’s instincts, as she immediately follows Billings towards the hoop. On the catch, Laney sees the extra pressure coming and bounces a pass to the cutting rookie, who corrals it, power dribbles, and banks in the layup to cut the Dream lead to three.

Assist 4: Early in the third quarter, the Liberty had fallen behind by eight, their largest deficit of the evening. Here, Laney pushed the ball in transition. When this play picks up, you’ll see her effort has forced three Dream players to sprint back with her, all focused on her ability to finish around the rim. Instead of finishing her attack, though, Laney peels off and surveys her trailing teammates. Again, Williams is caught with a decision to make: guard Onyenwere in the corner or Whitcomb up top? As soon as she commits to one (Whitcomb), Laney makes the easy dish to the other. Michaela sinks the open triple.

Assist 5: Just a couple of minutes later, this next assist comes off an offensive rebound scramble. After a Whitcomb miss, Ionescu chases down the loose ball and finds Laney alone at the top of the key. She kicks out for a reset, and again Laney uses her quick shot-fake to dupe the closing defender, Sims. This time when she drives, it’s Elizabeth Williams that steps up to protect the basket. Laney spots Onyenwere open again on the wing and kicks it out. Again, Courtney Williams is hesitant to leave Whitcomb alone in the corner, so Onyenwere gets her three off cleanly.

Assist 6: Here’s an example of New York taking advantage of Atlanta’s desire to be aggressive. They put both their primary ballhandlers, Laney and Ionescu, into a pick-and-pop action. Laney drives the corner off the screen, then kicks back out to Ionescu, who then drives to draw the defense back towards her flipping it right back to Laney in the corner. The whole time, Parker is watching the action, trying to decide which Liberty player she should pressure. Parker spends eight seconds watching this play develop, her head turned away from Shook, who she’s supposed to be checking. Shook notices this and slips to the basket. She catches Laney’s attention and finishes the game-tying two without resistance.

Assist 7: This is similar to Laney’s first assist of the night. This time, though, she posts up Williams closer to the middle of the basket. Bradford attempts to help with a double team, while Chennedy Carter stays home up top paying attention to the light-shooting DiDi Richards. Without much aggressive pressure around her, it’s an easy bounce pass to the corner to find Odom, who splashes the shot from distance, the fifth assisted three from Laney in the game.

— Weird stat alert, but Hopkins cannot be happy with his team’s late-quarter defensive execution. Atlanta scored in the last five seconds of each quarter:

— Crystal Bradford, who has been a nice surprise this season, put up a career-high 14 points. She hit 50 percent of her shots and four-of-six from three, along with pulling down seven rebounds. Take a bow, Crystal!

— Sami Whitcomb connected on her 200th career three-pointer. While she wasn’t as involved offensively as she’d been on Saturday night, the respect she commanded on the court was evident in the open looks New York’s other shooters had (evidenced multiple times above in those Laney assists). After practice on Thursday, Whitcomb talked about that possibility. “If they take the shot away, great. Hopefully we can penetrate then,” she said in response to a question from Tabitha Turner. “Everything we try to run and execute is to get the best shot the defense gives us. If they take away the shot, they can’t help as much when Betnijah drives.”

— After being listed as “probable” on the injury report, Rebecca Allen again did not play. “I’m definitely feeling better,” Allen told NR’s Geoff Magliocchetti after shootaround earlier in the day. “We’re just being cautious, managing a foot thing I’ve got going, but every day is an improvement.”

— Allen’s absence loomed even larger because of the absence of Kiah Stokes, who was not listed on the injury report but was noted as “DNP: PERSONAL” on the stat sheet. When asked for clarity in postgame, Hopkins said, “We’ll have more on that tomorrow.” This morning, the Liberty announced that they had waived Kiah Stokes.

Next up: The New York Liberty (8-9) head home to host Tina Charles and the Washington Mystics (7-9) on Saturday, July 3. This will be Tina’s first trip back to New York since being traded ahead of the 2020 season. Tip-off is at 1 pm ET on CBS Sports Network.