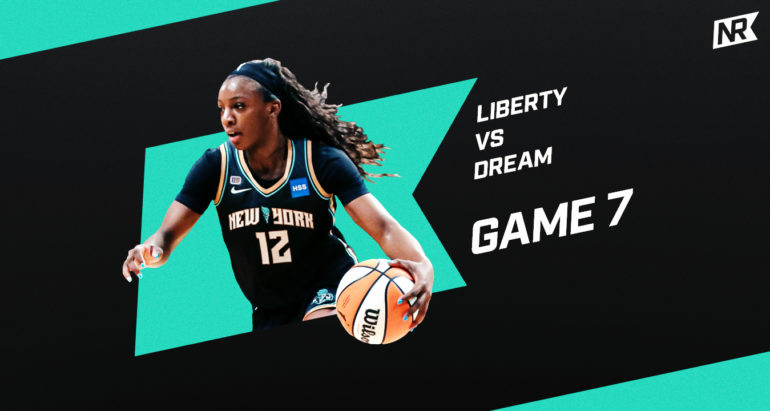 The New York Liberty entered Saturday afternoon’s contest against the Atlanta Dream at 5-1 and were looking to get a solid win before their schedule gets incredibly tough—four of the next five games are against the Aces or Sun.

But Courtney Williams had other ideas.

The Dream guard scored 31 points, including the go-ahead three in overtime to lift Atlanta to the 90-87 victory. The loss spoiled a great night from Michaela Onyenwere, who had 29 points to lead the Liberty.

So, what did we learn about New York in this loss?

Two players with the last name Williams had big games for the Dream, but let’s just focus on one of those players for now: Courtney Williams—or COURTNEY WILLIAMS, because her name should probably be spelled in All Caps at this point.

There’s long been a joke about how Courtney Williams couldn’t stop taking long twos, but on Saturday, she made sure to get behind the arc for five of her shots. She was 3-for-5 on those, including this shot that won the game for Atlanta:

But some credit also has to go to the way New York defended on this play, which was…not ideal.

First, the good part: Walt Hopkins put DiDi Richards in. If you need to make a defensive stop, having Richards in for the play is smart. She’s an excellent perimeter defender who can bother ball-handlers and shooters.

But Atlanta is also a really, really good team when it comes to setting big picks and freeing up their players. Richards initially does a good job staying in front of Williams, but then Elizabeth Williams comes up and sets the screen. Richards runs right into that screen, slowing her ability to defend the ball-handler. That switches the responsibility on defense here to Kiah Stokes, who is dropped too far back to do much about a Williams pull up.

What should have been done here? Maybe Richards should have gone through this screen instead of around it, sticking with Williams and forcing her to drive. Sure, that would have left Elizabeth Williams unguarded, but with just four seconds on the clock, maybe there wouldn’t have been time for that to really matter?

I don’t know. What I do know is that you can’t give Williams space like this. New York did. Atlanta won.

Michaela Onyenwere Is The Rookie of the Year Favorite, Right?

New York lost this game, but a huge bright spot for the Libs was that Michaela Onyenwere had a huge day. The rookie out of UCLA scored 29 points, going 10-for-22 from the floor and 6-for-14 from three.

There were lots of concerns when Onyenwere was drafted that she was too much of a “tweener.” Too small to be a traditional four, not enough shooting to be a three.

But New York is proving to be a perfect spot for her. This team plays small at power forward, so Onyenwere’s size isn’t an issue. And with so many strong shooters on this team to take pressure off her, Onyenwere is just feasting on open shots:

In terms of fitting Onyenwere into the larger conversation about rookies, she almost has to be the front runner for Rookie of the Year, right?

Charli Collier and Awak Kuier aren’t getting a ton of minutes in Dallas, even with Collier starting. Aari McDonald is stuck back in the Dream rotation. There’s just not much competition right now. She’s the only rookie averaging over 20 minutes per game. She’s leading rookies in points per game and is fourth in rebounds per game. And only four rookies have more than 0.0 win shares, with Onyenwere leading the way at 0.3. (And hey, teammate DiDi Richards is second!)

It’s safe to say that those concerns about how Onyenwere fit in the W are being answered so far.

Sami Whitcomb Was Big On Both Ends

Saturday featured a good reminder of why the Liberty acquired Sami Whitcomb this offseason.

We already know that Sami can shoot the ball. Against Atlanta, she shot 5-for-7 from three, bringing her three-point field goal percentage on the season up to 46.5 percent.

But look, we’ll have plenty of time to talk about Whitcomb offensively. Let’s talk instead about what she provided on the other end:

Like Owen said, Whitcomb’s defense was one of the only things that slowed Courtney Williams down.

Whitcomb does a good job pestering Williams here. Even when Williams gets a step on her while driving, Whitcomb sticks with the play, providing pressure from behind as Williams drives into the Liberty interior.

Sami also provided a strong rebound late to help the Liberty get the game to overtime. The team didn’t prevail, but Whitcomb in the fourth quarter was arguably the biggest reason the team even got Free Basketball to happen.

Other Notable Things From This New York Liberty Basketball Game

What else happened Saturday? Well: