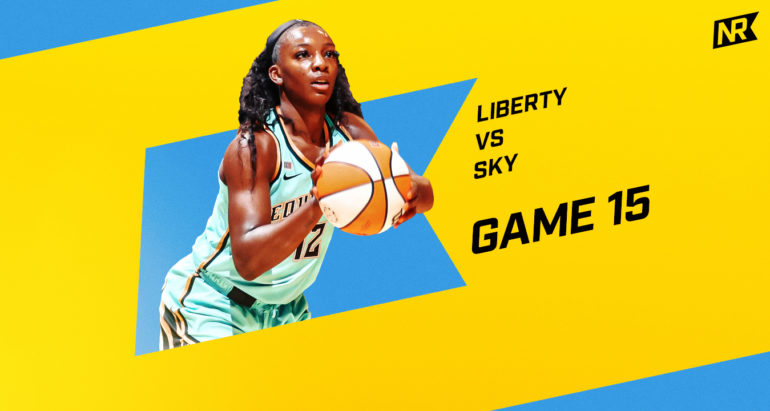 A second quarter onslaught doomed the New York Liberty to another one-sided defeat at the hands of the scorching hot Chicago Sky.

BROOKLYN-Thursday night at Barclays Center was unfortunate deja blue all over again for the New York Liberty.

Paced by 18 points by Kahleah Copper and Diamond DeShields, as well as another double-double from Candace Parker (12 points, 11 rebounds), the Chicago Sky won their league-best seventh straight game and their second over the New York Liberty at Barclays Center. Thursday produced a 91-68 victory, condemning the Liberty (7-8) to their fourth defeat in the last six games. Chicago (9-7) previously took another one-sided match in Brooklyn on Tuesday, aiding their ascension up the WNBA leaderboard. The more recent win was energized by a 37-13 advantage in the second quarter, increasing a four-point lead at the end of the first quarter sevenfold.

“I don’t say that I’m frustrated with (the players),” head coach Walt Hopkins said of the team’s mood and morale after the game. “I think we’re all frustrated because I know that they’re doing the work and it hasn’t translated yet. What you have to do is stay the course. It’s been shown that they’re capable of playing (the right) way, and be really successful on both ends of the floor.”

New York was led by 16 points from Michaela Onyenwere.

Three Strikes and Out

By this point, anyone who’s watched five minutes of basketball in the Walt Hopkins era knows that the Liberty like to shoot the three (averaging over 28 a game). Futility has been no deterrent, as the Liberty put up 47 triples over the Chicago pair…sinking only 10 (21 percent). They shot 4-of-25 in Thursday’s showing, including 2-of-17 over the first 20 minutes alone.

One of the positives gleaned from last year’s painful bubble endeavor was that the Liberty weren’t afraid to take open looks, even when they weren’t following. But moral victories aren’t as valuable when there are expectations, no matter how small.

Sami Whitcomb (2-of-9 from three-point range) said that the Liberty can live with such a showing…but only if they’re supporting it with good defense. Transitional woes were particularly troubling, as Chicago’s speed led to their demise, a problem that Hopkins attributed to issues in “energy and execution”.

“You can shake off a four-for-whatever, a bad night, in a close game where you’re locked in defensively and you play defense, you can accept that,” Whitcomb said. “You can have a bad night, you can’t not show up defensively as well.”

Brooklyn Bruin Brewing in the Second Half

Michaela Onyenwere had a roller-coaster game, one that can provide both moral and visual victories. Onyenwere had the right idea in the first half, passing on some open opportunities from deep for interior penetration, attempting to get Chicago’s bigger bodies into foul trouble. She shot 1-of-10 over the first 20 minutes, though she and Bec Allen combined for five drawn fouls…each of which drew free throws…over the first three-plus minutes of the second quarter before things got out of hand.

Onyenwere, stopped switching shooting hands in the second half and the penetration worked to her advantage. The Liberty’s fight and refusal to quit in a numerically hopeless situation was best defined by her second half, when she shot 4-of-7 en route to 11 points.

“It’s not a surprise how she played how she did,” Kylee Shook said. “Offensively, she just kept attacking shots just weren’t falling in the beginning. (In the second half), she got to the rim and scored…she’s an amazing player, amazing person. She tried, she gives great effort.”

The sophomore Shook did what she could to help Onyenwere’s efforts in the interior as well. For the second time in five games, Shook set a new career-best in rebounds (11) and the young pair did what they could to limit the impact of Parker. They mostly succeed, though Parker was slightly reigned in (23 minutes) once things got out of hand.

The Rich Get Richards

In the midst of a 23-point loss, Richards somehow had a strong plus/minus of 12. Her performance, particularly her first minutes in the third quarter, provided energy and helped the Liberty win the second half by a 41-36 margin. Richards finished the game with three points, two rebounds, and an assist and a steal each. But energy, a statistic that has no numeral, was in infinite supply helped pick team morale up in dire straits.

“Didi was really good as she has been all year,” Hopkins said of Richards’ 11-minute showing. “She’s one of those people who stays ready whenever she’s called on, and it’s impressive.

“I know that everybody’s been in a situation where sometimes they don’t play, sometimes you play 25 minutes. and everything in between. It’s hard to stay ready, and stay tuned to be effective…and support your teammates. She’s just brilliant In that way. I thought she did a lot of good things tonight and I’m excited to go back and show her all the good things and build on them.”

Up Next For The Liberty

The Liberty hit the road for a back-to-back pair against the Atlanta Dream, starting on Saturday night (7 p.m. ET, YES). Atlanta has won the lone meeting so far this season, a 90-87 overtime decision on May 29 in Brooklyn.