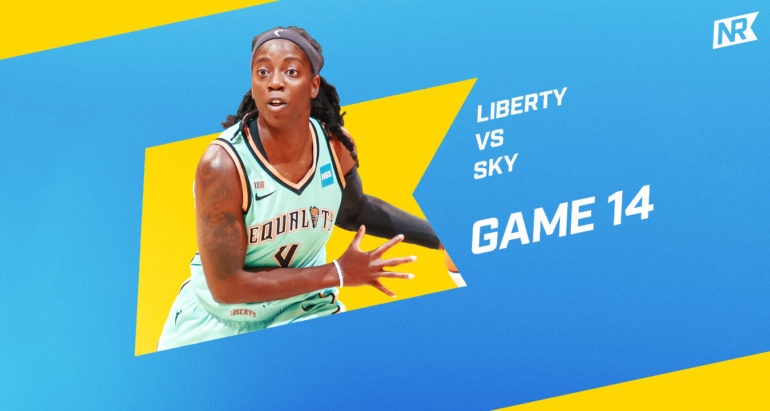 The Liberty recently returned home on Tuesday after a five-game road trip which saw them go 2-3 during that stretch. Sabrina Ionescu, still on a minutes restriction, remained out of the starting line-up again.

The Chicago Sky arrived in Brooklyn on a five-game winning streak. Candace Parker, who missed several games due to an ankle injury, has been leading the Sky. Her return has coincided with the Sky’s wins, as they lost seven straight games without Parker. To start the game, the Liberty gave the defensive assignment of matching up with Parker to rookie Michaela Onyenwere. Welcome to the league, Michaela!

The Liberty, who heavily rely on their three-point shooting, would shoot a season-low of just 21.4 percent.

Betnijah Laney kept up her All-Star season by dropping 18 points on seven-of-twelve shooting while adding five rebounds and five assists, but the Liberty lost 92-72.

Here are some takeaways from the defeat.

Still without the 2019 Defensive Player of the Year, Natasha Howard, New York would start the game by assigning rookie Onyenwere on Parker defensively. Both teams began the game shooting cold. By the 2:23 mark in the first quarter, the Sky had just a one-point lead of 13 to 12 with Parker accounting for five of the Sky’s points. Parker would re-enter the game midway through the second quarter with the defensive assignment now tasked to Rebecca Allen. In just over five minutes of playing time, Parker would score nine points while the Sky went on a run to end the first half up 48 – 32.

Though the Liberty would have a better third quarter offensively, Parker would continue her dominance and balloon the Sky’s lead up to 23 by the end of the third quarter. Even with Parker bringing the ball up the court, or driving into the lane, the Liberty had no answer to defend the two-time MVP. In just 23 minutes of playing time; Parker would bring down 23 points on 9-of-16 shooting, paired with 12 rebounds and six assists.

Something isn’t working and it’s the Liberty three-point shooting. Tuesday saw the Liberty shoot a season-worst 6-of-28 from three-point range. A Kylee Shook three-pointer at the 3:23 mark in the second quarter would be the Liberty’s first of the night.

But it’s not like this was just an off-night. During the Liberty’s last five games, New York has shot a combined 45-of-157 from beyond-the-arc (28.6 percent). During their first nine games, the Liberty only fell below 40 percent twice (Game 2 vs. Indiana – 36.0 percent and Game 8 versus Las Vegas – 30.0 percent). Their recent “best” was their June 15 lose against Las Vegas where they went 9-for-28 from deep (32.1 percent). The formula of shooting threes worked in the beginning of the season, but opposing teams have adjusted their defenses on New York, and Coach Hopkins needs to adjust the Liberty’s game plan going forward.

The bonus during a blowout is the ability for the bench to see significant minutes. This included Ionescu, who would see 27 minutes in her third game back since suffering tendonitis in her left ankle. Sabrina would bring in six points, eight rebounds, and seven assists today with just one turnover. Jazmine Jones would have another solid game for New York. Jones, in nearly 25 minutes, would tally eleven points (5-of-8 shooting) and five rebounds. Leaonna Odom would also be productive for the Liberty bringing in eight points on 4-of-8 shooting.

Quite possibly the best news for the Liberty came before the game. Natasha Howard, who’s been out since she injured her right knee on May 24, was seen participating in shootaround with the team.

Coach Hopkins said “I’d say in the next couple of weeks. I don’t know if it’s in a week or if it’s gonna be two weeks, but I think that’s a fair timetable, obviously barring setbacks.”

The Liberty saw their largest crowd of the season. In their sixth home game, the Liberty announced 1,419 fans were at Barclays. The WNBA, the Liberty, and Barclays Center still have capacity limits set in place for now. These restrictions are expected to be reevaluated during the Olympic break.

Next Up: The Liberty have a rematch against the Sky on Thursday at Barclays (7pm on Twitter, YES Network and NBATV Canada)