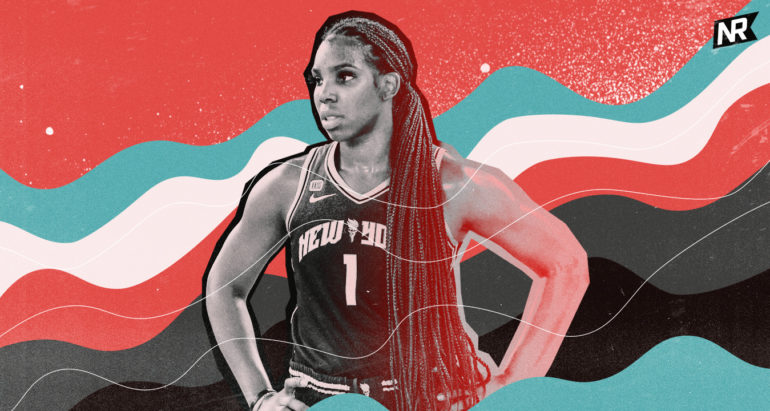 The New York Liberty recently found themselves in a bind, with an injury to Natasha Howard putting them in a tentative situation up front. But thanks to the WNBA’s hardship waiver, that injury—plus the team not having Kiah Stokes, which dropped their number of active players below the hardship threshold—allowed the team to go out and find a temporary solution up front: Reshanda Gray.

Nothing against the other bigs on this roster like Kylee Shook, but Gray brought some strong interior play that the Liberty really, really needed. But her time on this roster was temporary, I think we should take this time to at least talk about what Gray gave New York and why some WNBA team needs to get her on their roster.

Some Background on Reshanda Gray

This wasn’t Gray’s first go-around with the New York Liberty.

Back in 2019, Gray appeared in 34 games for the team, including 10 starts when Amanda Zahui B. was injured. On the season, Gray averaged 15.3 minutes per game, shooting 47.3 percent from the floor with 5.2 points and 5.2 rebounds per contest.

Gray then spent last year with the Sparks. She only played in 10 games and averaged just 6.2 minutes per contest. Last year’s Sparks team didn’t have a ton of minutes available at the four or five between starters Nneka Ogwumike and Candace Parker and backups Marie Gulich and Kristine Anigwe.

What Gray provided for New York was a steady presence inside. Unlike Shook, Gray isn’t a stretch big. So while a lot of Shook’s offense was generated via pick-and-pops and shooting as the trailing big on the break and all that sort of thing, Gray wasn’t afraid to get inside and bang around in the paint.

Take this play, for instance.

The Liberty run a pick-and-roll with Sabrina Ionescu and Gray. Gray bumps Kelsey Plum then rolls to the hoop while two defenders wind up on Ionescu, driving her to the baseline and looking to trap her there. During this commotion, Dearica Hamby ends up moving into the paint in a position where she could contest a shot if Ionescu gave the ball up. (As I mentioned in the caption for the tweet, I think Ionescu could have passed a little earlier and this would have been an easier finish for Gray.)

Sabrina does have to give up the ball, because she’s been driven into a terrible spot. She gets it to Gray just outside the restricted area. It’s a bounce pass, which gives A’ja Wilson enough time to turn around and get herself involved in the play.

So, now you have Wilson and Hamby there, basically doubling Gray at the basket. So, what does Gray do?

Oh, nothing really: just scores in between the two of them while absorbing contact.

New York doesn’t really have another big who can do this kind of thing. Shook’s inside game isn’t super developed yet. Kiah Stokes can survive down there a little better, but Gray is taking 1.5 more shots per game in the restricted area than Stokes, and Stokes has yet to take any non-RA paint shots, while Gray is hitting half of her 1.7 shots per game from there. Offensively, Reshanda Gray might be the most paint-bound big this team has had this season, but that’s fine because she’s the big who is best equipped to score down there.

Defensively, Synergy—which admittedly is flawed on the defensive end, but we’ve got to go with what we got when it comes to stats—has Gray ranked in the 71st percentile in points per possession allowed when she’s the primary defender. This includes an 88th percentile ranking in post up defense.

Take this all with a grain of salt, but Stokes is in the 32nd percentile in post up defense and Shook is in the 20th. With Natasha Howard still out, Gray was someone who could help anchor the inside of a defense that needs anchoring.

Gray’s former Liberty teammates seem to have a lot of praise for her:

and Gray herself said she’ll be back:

The question is what “back” means.

The current financial situation in New York makes it unlikely that Gray can be back on the Liberty this year as anything more than a hardship player. And maybe that’s what she means by “back”—that she knows the Liberty will bring her back whenever they qualify for a hardship.

If that’s the case, good for New York! Gray’s someone who can come in cold off the street and give you strong minutes as the backup five. If they have her as an option, that’s good for the Liberty, even if it’s not as good as having Gray full time.

And hey, you never know what might happen. This Jackie Powell tweet seems to allude to something happening with Gray in the near future:

But look, Reshanda Gray deserves to be more than just a replacement contract. Full stop. I get that roster space in the WNBA is at a premium, but Gray is someone who you can say with full confidence is better than players who are currently on rosters. I won’t name names here or suggest teams that she could help, but if no one is able to make room on their 2021 rosters for Gray, it’ll be a shame.

Hopefully, Gray’s recent play earns her a real roster spot in 2022. Even as the league grows more and more perimeter-oriented, there’s a need for an efficient scorer inside who can defend in the post and can hold her own on switches. New York in particular seems like it could be a good landing spot for her, though the Liberty are going to have to answer a ton of questions this offseason about roster construction. But center is still the position that’s the least settled long term, with many of New York’s questions being about fitting some guards back into things.

Anyway, Reshanda Gray should be on a team. It would be great for the Liberty if that team was the one that plays at Barclays.