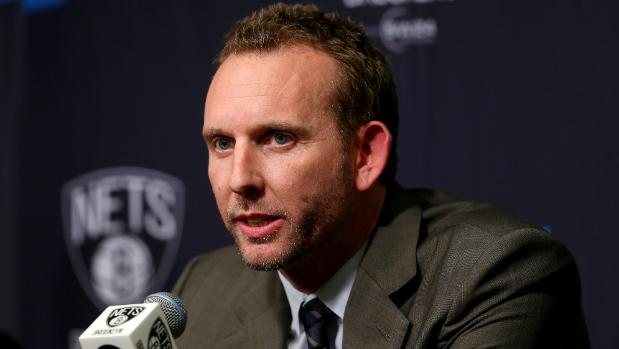 Brooklyn Nets Free Agency: Pettiness and the Value of Having Cap Space

Handling pettiness and earning the status as the NBA’s cap space machine team are two ways to describe how the Brooklyn Nets’ offseason is going.

It’s July 12, which means the Brooklyn Nets free agency plans will soon no longer be held up by the Washington Wizards and will be able to progress with their wild, fluctuating quest for players. This extended wait may have played a role in the Lakers winning the Kentavious Caldwell-Pope sweepstakes on Tuesday night, but who can tell the difference between no news in Marks-land, versus the tight-lipped Nets front office?

While Nets General Manager Sean Marks was not able to get his hands on yet another restricted free agent, he left his marks all over the Wizards. In fact, so much that the Wizards decided to take their sweet, sweet time to prolong their decision on Porter for as long as they possibly can (as of this writing, the Wizards still haven’t finalized the deal). According to the Washington Post, after the Wizards matched Porter’s offer sheet on Saturday, Porter has 48 hours to report to the team to take his physical, and Washington would then have another 48 hours to file the process to the league.

This only holds up the Brooklyn Nets free agency plans, as well as the Toronto Raptors’ though, because of the DeMarre Carroll/Justin Hamilton trade that took place the night Washington matched Brooklyn’s offer sheet. The Wizards can only delay this process until Wednesday evening, but they are clearly looking ultra salty when it comes to the way the Nets meddled with their starting small forward this summer.

Here’s the exact timeline of events centered around Porter, which explains why every single thing the Nets have done since then has hinged on whether Washington would try to retain Porter:

Following Brooklyn’s delivery of the offer sheet to the Wizards, the Washington Post’s Tim Bontemps did point out Washington planned to match it… and would take six days to complete the task (which is what happened). So, I guess this grueling hold-up was at least not tossed from the left field, but, at the same time, as Ball Don’t Lie’s Henry Bushnell would put it, this was probably the pettiest of petty wars that will happen between two teams in this year’s free agency. Even if an average NBA fan was probably not as tuned in as all of us to tracking each and every event in the Otto Porter Jr. sweepstakes mania.

Here are a few excerpts from Bushnell that put this whole situation quite amusingly:

You know what that is? It’s an expert troll job from Nets general manager Sean Marks, who has made a habit of ensuring restricted free agents get paid big bucks, whether he’s doing the paying or somebody else is.

The Nets knew Washington would match the offer, so they threw every sweetener they could find onto the offer sheet they put in front of Porter. In doing so, they created for themselves a win-win scenario.

In Brooklyn’s best-case scenario, the sweeteners are too much for Washington to stomach, the Wizards refuse to match the offer, and Porter becomes a Net. In the less-good-but-still-fantastically-amusing scenario, the sweeteners make the contract ever so slightly more difficult for Washington to swallow. The player option gives the team less control over Porter, and allows him to opt out for more money after three seasons if he develops into a true superstar. If Porter’s development hits a snag and the contract becomes a burden, the kicker makes it more difficult to move in a trade. And the salary advance … well, that might as well just be a declaration of petty war.

Yeah, I don’t blame the Wizards for being petty. I mean, I would be too if Marks was putting me in a tight corner and forcing me to jump through hoops to re-sign a player I had intended on keeping all along for a less ludicrous cost. Not to mention, the little tidbits Marks added to Porter’s deal only make matters for Washington moving forward. 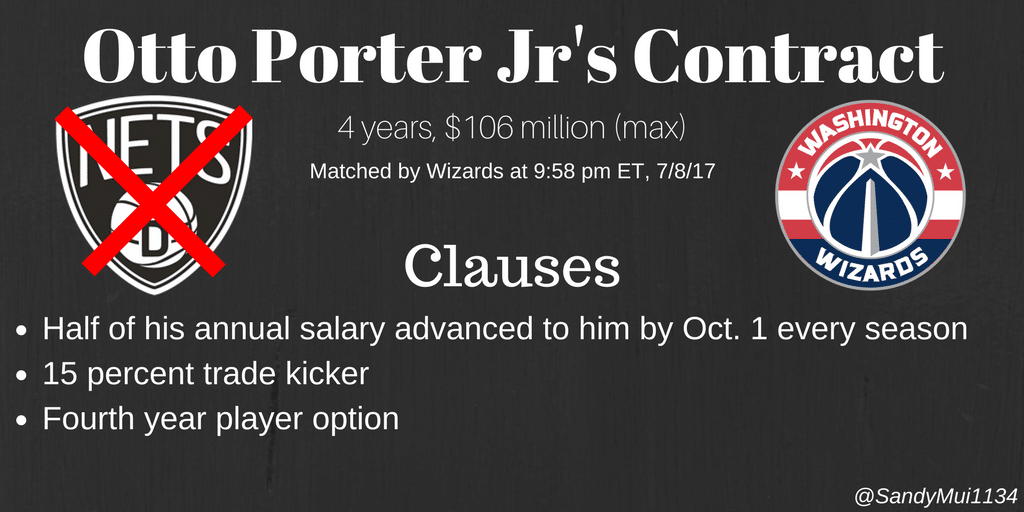 The fact that Porter’s contract is worth the max, as well as the ridiculous clauses attached to his contract, will certainly have a hell of a drastic toll on the Wizards’ cap room, especially when franchise superstar John Wall is still “chillin'” on signing the supermax extension he was offered. Washington will indeed exceed the luxury tax for the first time in franchise history by retaining Porter, with the team’s estimated salary standing at $126.1 million, which will be $10.7 million above the luxury tax line. But, don’t worry, they’re not the only ones who could potentially be in a tight foothold due to extravagant deals.

The Luxury of Not Being in the Luxury Tax

As usual in free agency, the top storylines usually involve players signing lucrative contracts, with debates that follow over whether x player is worth such a copious amount of money. ESPN’s Bobby Marks tweeted on just the second day of free agency that half of the NBA could be in the luxury tax next summer, which is pretty telling about the direction the league is headed in. Meanwhile, despite the lack of fruitful nabs in free agency, the Nets are excelling in a category seemingly every team has failed at (or has just not understood the full importance of): preserving cap room.

If they had any success at getting Allen Crabbe or Tyler Johnson last offseason, or Porter last week, their salary sheet would tell a different story, but Brooklyn is just one of two teams that still has over $10 million in cap space. Plus, already, 23 teams have resorted to entering the luxury tax, which is a much higher (and absurd) amount than Bobby Marks had anticipated. Sure, it’s still early into the offseason and there’s still time for teams to alleviate how far they’ll have to suffer in the luxury tax, but it’s become evident that a majority of the big bucks are being spent in just the first month. Who knows where the teams in the league will stand come August?

Let’s check in with our friends over in Portland and Miami. In terms of cap room, the Trail Blazers have the second-worst situation in the NBA, with of course, the Cleveland Cavaliers possessing the worst. Four of the five starters in Portland (Damian Lillard, C.J. McCollum, Allen Crabbe and Evan Turner) eat up over half the team’s active salaries, with arguably the last two players not living up to their monstrous contracts. You’re welcome, Allen Crabbe.

The Heat only recently fell into the luxury tax after handing out big bucks this summer to the living legend himself in Dion Waiters, James Johnson and Kelly Olynyk (I still can’t contain my joy over the fact that the Nets did not fall into this rabbit-hole). Relative to the rest of the NBA at the moment, Miami isn’t in as dire of a situation as a team as say, the one I just discussed, but they’ll be hoping that tossing this money will give them a good shot in the weakened East. (Pat Riley has already confirmed the Heat will be gunning for a top-4 seed next season.)

As it stands, similarly to how the Nets entered free agency to begin with, they still have a heap of money to work with ($16.5 million) to ideally bolster their roster before October. The options may be wearing thin, with Caldwell-Pope and Dewayne Dedmon flying off the market on Tuesday, but the highly-discussed JaMychal Green and Jonathon Simmons have not yet budged. The moratorium the Wizards hold over the Nets will soon be finished, which means we should be hearing about new potential routes Brooklyn will take in the near future. Or maybe not, since you know, it is Sean Marks, and he rolls with the style of “No deal? No news.”

With the recent DeMarre Carroll trade landing the Nets two draft picks in next year’s draft, many have already deemed this to be a very successful offseason for Sean Marks. If push comes to shove, at the very least, the Nets already hold something few teams will have come next summer, and believe it or not, it will be valuable.

All team salary information in this last portion of text was taken off Spotrac.