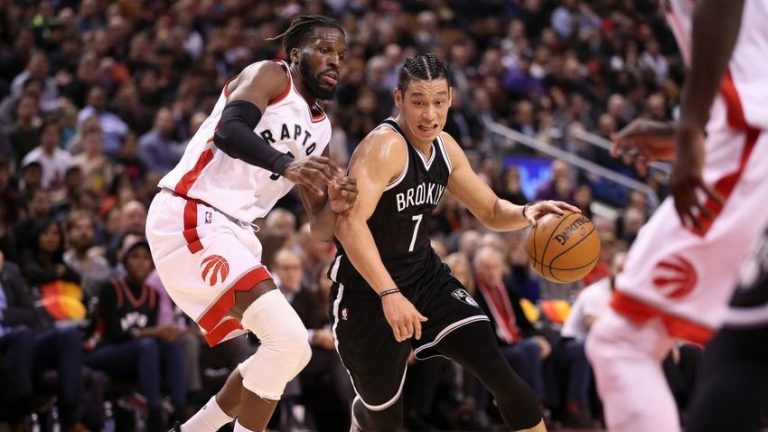 DeMarre Carroll Provides The Heart That Brooklyn Has Sorely Needed

Hours after losing out on Otto Porter, Sean Marks went another route in acquiring DeMarre Carroll from the Toronto Raptors. The Brooklyn Nets got their starting small forward while the Raptors shed salary.

In the days following this deal, many praised Marks for acquiring a first-round pick (likely to fall in the 20-25 range) in a draft where the Nets had none. Carroll, who had a disappointing stint with the Raptors, was thought of as a pure salary dump by some. Contrariwise, Nets Nation should not look at the former Atlanta Hawk as simply a number against the cap. Carroll can still be, at the very least, a reliable rotation player for years to come.

Leading up to last weekend’s trade, Carroll has had an interesting career arc. He played four years in college, two at Vanderbilt and two at the University of Missouri. After being selected towards the tail end of the the first round in 2009, it took nearly five seasons from him to find his footing in the league (a bit shocking for a player who has the ideal size and skillset of a stretch four.) Carroll’s first real opportunity in the league came when he enrolled at “Hawks University” in 2013.

Signing Carroll was one of the first moves the Hawks made under Mike Budenholzer, and he ultimately ended up being a fantastic fit in Coach Bud’s system. He once again embodied the nickname “Junkyard Dog,” a title he was given in college. Carroll turned into a defensive and three-point shooting dynamo in Atlanta. Add 6-8, 215 pound frame and Hawks found themselves with a rare bread.

Since signing a four-year, $60 million deal with Toronto in the summer of 2015, Carroll has failed to continue the success he garnered under Budenholzer (and Kenny Atkinson). His numbers have dropped across the board and injuries have been a recurring theme.

Enter the Brooklyn Nets, who have seemingly turned into the league’s dumping ground for “bad contracts” as long as an asset is attached. Carroll’s role in this deal has been overwhelmingly classified as a salary dump, however, there is hope for him to reclaim his Hawks glory.

Leave Toronto in the Rearview Mirror

It’s easy to conclude that the biggest reason why Carroll has been written off in this trade is due to the past two seasons. One can read anywhere that injuries will always loom for Carroll and that he will never be the same player because of them. In discussing the trade on a recent podcast, Bill Simmons brushed over Carroll’s value all together, saying, “Toronto basically gave up a protected first, and a second for Carroll who couldn’t play for them anymore.” By Simmons’ logic, playing 26 minutes a contest for 72 games last season can be classified as “not being able to play.”

Herein lays the problem with the public’s criticism of Carroll’s Toronto years. The 2016 season was in large part a year that was dominated by injuries for Carroll. However, this could be due to a number of circumstances, with minutes distribution being the most glaring. Dwayne Casey played him 35 minutes a contest until he was hit with a string of injuries beginning in December, 2015. If Casey has continued playing at him at this rate for the entire season, it would’ve ranked in the top 10 for minutes per game that season.

Anyone who has studied Carroll’s injury history would know that he is best suited playing 28-30 minutes a game with some rest games scattered. He has had extremely bad injury luck; being shot in the ankle has stood out as one of the more unexplainable incidents. The former Missouri Tiger has sustained everything from knee, to wrist issues since college. As if all of these setbacks weren’t enough to deal with, Carroll is possibly due for a liver transplant in 12 years.

These injuries, combined with the hiccups sustained as a result of being overworked during the early portion of his time in Toronto make it logical for Coach Atkinson to put a minutes restriction on Carroll. With some insightful treatment from Brooklyn’s medical staff and scheduled rest games (which should become less necessary as back-to-backs become more few and far between) every couple of weeks, Carroll should be successful and stay healthy for the duration of his contract.

If there’s one thing injuries can’t take away, it’s Carroll’s versatile size. With a frame that can match-up with most power forwards and the skills of a wing, he can be utilized in a variety of ways.

Nets fans should know better than most about Carroll’s two-way effectiveness. He was the Hawks’ most valuable player in their six-game, first round series win over Brooklyn in 2015. This performance, ironically enough, greatly aided in him receiving the offers he did in free agency that July. He averaged 17.5 points, and 7.2 boards a contest on 46% shooting from behind the arc during that series. He did this all while shutting down the likes of Joe Johnson and Bojan Bogdanovic in the closeout game.

Beyond this series, Carroll has consistently been able to guard twos, threes, fours and in some lineups, fives. This, combined with having the ability to stretch the floor puts him in a very special class with players such as Jae Crowder, Wilson Chandler, and Harrison Barnes. This classification is perhaps one of the most valuable in today’s NBA where a majority of players on the court must have range, and positionless basketball is being embraced more than ever.

Carroll’s range, in particular, has been scrutinized since joining the Raptors. Yet, there is still proof that defenses need to stay attentive when Carroll spots up behind the arc. Despite not having a good shooting season by his standards, Carroll still knocked home the 17th most three-pointers among small forward. That number would’ve ranked in the top 10 among power forwards, which is a position he spent 27% of possessions playing for the Raptors last season.

At his peak, Carroll was one of the most effective forwards in the league from long range. This was while playing in a system with the Hawks that was centered around making the extra pass and finding the best available shot.

At 30 years of age, Carroll is bound to regress as over the next several years. Yet, his skillset will allow him to reinvent himself in the future. Expect Carroll to gradually shift to playing the four more and more over the course of the next couple of seasons. Look no further than seasoned veterans such as Richard Jefferson, Paul Pierce and Matt Barnes, who have all taken up the responsibilities of a power forward in their later years, in turn prolonging their careers.

This second career would not be a possibility without Carroll’s perfect size and wingspan for a versatile forward.

“It’s hard to just change it all of a sudden. It’s a culture thing, you have to build it from the ground up and that’s what we did in Atlanta. We built the (culture) moving the ball and trusting each other.” This is what Carroll has to say when contrasting Atlanta and Toronto’s respective cultures in a recent interview with the Toronto Sun.

The Nets’ new brand has been compared to Atlanta’s arguably more than any other team’s. The most obvious connection is Coach Atkinson’s tenure in Atlanta as he served under Budenholzer who had been a disciple of Greg Poppovich in San Antonio for 17 years before landing his current position. Carroll’s most successful seasons thus far come with the Hawks, where Atkinson was the lead assistant. The entire coaching staff worked together to create a special brand of team basketball which ultimately led the Hawk’s entire starting lineup being named Player of the Month in January, 2015. This was the first time in NBA history that the award had been used in this fashion.

Carroll plays better when operating in an offensive system where sharing the ball is pertinent. This was quite the opposite to the Raptors’ iso-heavy schemes involving their two primary ball handlers (ring a bell, Nets fans?) If Carroll were to reclaim his notoriety, it is hard to find a better spot than Brooklyn for him to succeed. Nobody described the organization’s feel culture better than Jeremy Lin who said this a few months back in an interview with the New York Post, “There’s a freshness, a different vibe, and what we did after the All-Star break will help. But also, players just want to be treated the right way, and I know that there’s definitely a lot of interest.”

The Nets shared the ball more than most teams in the league last season. The team ranked in the top 10 in passes made, (Raptors placed 27th) even surpassing none other than the Atlanta Hawks. As expected given the Nets’ depleted talent crop, most of these passes didn’t generate buckets. Yet, the groundwork has been placed to eventually become one of the more unselfish teams in the league in the coming years.

Carroll seems to fit perfectly into the mold of an ideal “Brooklyn Net.” In looking at every player that Marks has acquired over the past year and a half, not one has spoken out against the team, despite the franchise being a joke to most during that time span. Each player has welcomed coming to Brooklyn with open arms, whether it be through a trade or signing. Carroll himself was posting on Instagram (which has also shown that he appears to be in New York at the moment) soon after the trade broke, singing the Nets’ praises.

Carroll has the potential to be the prototypical Brooklyn Net on and off of the court. While Carroll may be making a dent into the Nets’ cap space for the next two summers, it’s hard to imagine many will be thinking of this factor when he is playing in a team orientated system, and draining threes at Barclays Center next season.