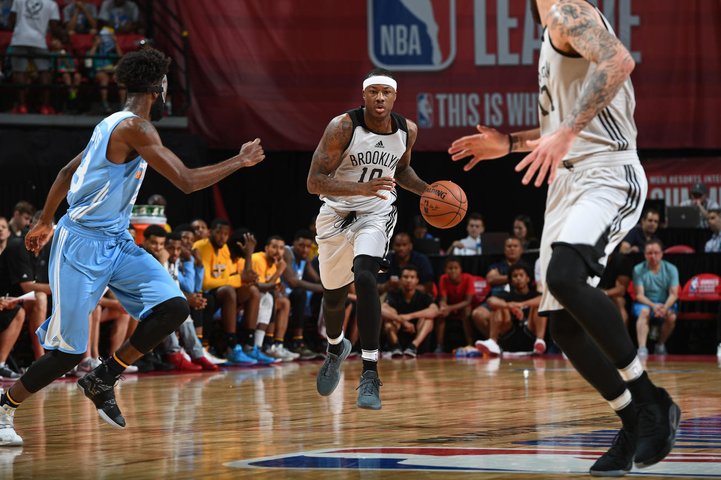 LAS VEGAS, NV - JULY 13: Archie Goodwin #10 of the Brooklyn Nets dribbles the ball up court against the Denver Nuggets during the 2017 Las Vegas Summer League game on July 13, 2017 at the Thomas & Mack Center in Las Vegas, Nevada. NOTE TO USER: User expressly acknowledges and agrees that, by downloading and or using this Photograph, user is consenting to the terms and conditions of the Getty Images License Agreement. Mandatory Copyright Notice: Copyright 2017 NBAE (Photo by Garrett Ellwood/NBAE via Getty Images)
Home
Brooklyn Nets
Nick Agar-Johnson

The Brooklyn Nets managed to get a first-round bye in the Las Vegas Summer League Tournament, and they showed why in their game against the Denver Nuggets. Brooklyn pulled out an 85-74 win against the Nuggets with contributions across the board.

Brooklyn outscored the Nuggets in each of the first three periods and entered the fourth quarter with a 19 point lead. Their NBA talent played well against the Nuggets, and the players up and down Brooklyn’s roster played with a level of intensity usually not seen in games in July.

Isaiah Whitehead has been one of the more impressive Brooklyn Nets players in Summer League so far. He maintained his strong level of play in this game, leading the Nets with 14 points on just seven shots. Whitehead nailed two of his four triples in the game, an area in which he struggled last season.

Whitehead also dished out four assists against two turnovers, including a beautiful dime to Caris LeVert for a dunk. Whitehead’s ability to score one-on-one was clearly going to shine against Summer League talent. However, the passing vision that he showed in this game will be a more important piece of his future success.

Rondae Hollis-Jefferson had two rough outings to start off in Summer League. He played much better in his third game against the Pelicans, and he built on that success in this game against Denver.

Rondae only scored nine points in this game but he canned four of his five shots, including a pretty mid-range pull-up jumper in the second quarter. Rondae missed his first shot (a mid-range jump shot early in the first quarter) but did not let it wreck his confidence. Furthermore, his jump shot has looked smoother in Summer League so far than ever before. Hollis-Jefferson also grabbed eight rebounds and threw a beautiful backdoor pass to Isaiah Whitehead for the game’s opening points.

While Rondae’s effective offensive game was a positive sign, his defense was far more notable. Hollis-Jefferson almost appeared to be sleepwalking in the first two games, but he was very active against the Nuggets. He gamely switched nearly every pick and roll and held his own defensively both on the block and on the perimeter.

With the Brook Lopez and Justin Hamilton trades, the Brooklyn Nets effectively turned two centers into one big man in Timofey Mozgov. While Jarrett Allen will clearly help down low, he is ultimately a project big man who might spend more time in Long Island next year than he will in Brooklyn. With that in mind, Rondae seems to have bulked up to help his defense in the post and near the basket. Given how effective he was as a power forward down the stretch run of last season, Rondae’s willingness to play frontcourt defense will be a huge factor in Brooklyn’s schemes next year.

Rondae Hollis-Jefferson was far from the only member of the Brooklyn Nets who was hard at work in this game. The Nets simply seemed to be more invested in the game from the start, as they bullied their way to the rim and fought for every loose ball.

However, one conclusion that certainly can be drawn from Summer League is on the bench. Kenny Atkinson is one of the rare head coaches leading his team’s Summer League squad, and it shows both in the team’s effort level and in the success of their schemes.

The Brooklyn Nets are playing hard on both ends of the floor, and their NBA players have looked impressive. In addition to Whitehead and Hollis-Jefferson’s success, Caris LeVert has looked strong while leading the team in scoring and Spencer Dinwiddie has finally shown the scoring aggression that occasionally held him back last season. With at least one more Summer League game to come against the winner of the Cavaliers-Lakers game, the Brooklyn Nets have already put together a very successful run in Las Vegas.