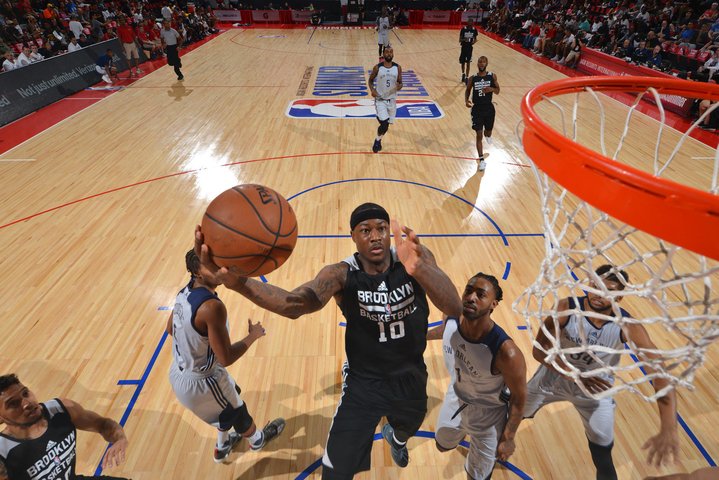 LAS VEGAS, NV - JULY 10: Archie Goodwin #10 of the Brooklyn Nets goes to the basket against the New Orleans Pelicans during the 2017 Las Vegas Summer League on July 10, 2017 at the Cox Pavilion in Las Vegas, Nevada. NOTE TO USER: User expressly acknowledges and agrees that, by downloading and or using this Photograph, user is consenting to the terms and conditions of the Getty Images License Agreement. Mandatory Copyright Notice: Copyright 2017 NBAE (Photo by David Dow/NBAE via Getty Images)
Home
Brooklyn Nets
Nicholas LeTourneau

The campaign for a Brooklyn Nets Summer League championship is very much alive after rebounding from Saturday’s loss to the Bucks by dominating the New Orleans Pelicans 95-66. It was apparent from the beginning of the game that the full-time Nets players didn’t want to lose as everyone looked to step on the gas in order to get the win. In addition to a good game from Isaiah Whitehead (11 points, five rebounds, four assists), the Summer Nets got great performances from Archie Goodwin, Caris LeVert, and Rondae Hollis-Jefferson.

Archie Goodwin Dominated Every Aspect Of The Game

The Brooklyn Nets Summer League roster is filled with a lot of question marks. So much potential, none greater than that of Archie Goodwin. Going into Las Vegas Summer League I was most intrigued by how Goodwin would play in a setting void of any pressure, so far he has impressed.

After getting off to a slow start against the Bucks on Saturday, Goodwin didn’t waste a moment of his 20 minutes against the Pelicans. He ended the game with 18 points, four rebounds, eight assists, one steal, and two blocks while shooting 67 percent from both the floor and deep. He shot six of nine from the floor, two of three from deep, and four of six from the free throw line.

What was most impressive about Goodwin’s performance was his assist to turnover ratio. He dished out eight assists to only one turnover while looking like yet another possible ball handler for Kenny Atkinson to use in his pass-heavy motion offense. Its so great to see Goodwin mesh with not only his regular teammates but also the rest of the Brooklyn Net Summer League team.

If Goodwin can keep looking like a reliable, dynamic guard then I have no doubt that he will be on this roster longer than his current contract. He is playing with a lot of heart but also composure. Much like Caris LeVert and Spencer Dinwiddie, Goodwin is looking very confident in his game and it is carrying over to how he plays on the court. He could be in for a very good season in Brooklyn if he can keep building on games like this.

Caris LeVert Builds On Big Game Versus The Bucks

Development and consistency are the two biggest things the coaching staff is going to be looking for from this Brooklyn Nets Summer League roster, Caris LeVert looks to be doing both nicely so far. He build on his big game against the Bucks with 17 points, eight rebounds, two assists, and one steal while shooting 50 percent from the floor and 33 percent from deep against New Orleans.

LeVert did an excellent job of rebounding and starting breaks in transition. All eight of his rebounds came on the defensive end and if he didn’t start the break himself, he did a great job of making the outlet pass to initiate the fast break. Seeing him rebound with consistency is a good sign given that he will most likely be asked to lineup at both the two and three at times this season.

My favorite part of LeVert’s game was seeing him hit some shots from deep. His 0-7 performance against Milwaukee didn’t deter him from letting it rip against New Orleans. He took a total of six shots and hit two of them, a decent number. Hopefully he can start getting a little more consistent from behind the three point line before the season starts.

He was consistently attacking the basket and is showing that good things happen when he does. He has good handles (especially for someone as lanky as he is) and finishes around the paint well. For someone who was billed as a shooter coming out of college, LeVert is looking like a more complete player with each passing game.

Rondae Hollis-Jefferson has probably struggled the most out of the full-time players during the Brooklyn Nets Summer League season but against New Orleans he looked like his old self again. He ended the game with 11 points, eight rebounds, one steal, and one block while shooting five of eight in 17 minutes of action.

Last game Hollis-Jefferson really struggled to find a way to get anything going from the floor but against the Pelicans he was able to solve some of those woes. The Nets as a whole did a much better job of passing the ball and running in transition, both of these things helped Hollis-Jefferson get things going instead of staying stagnant.