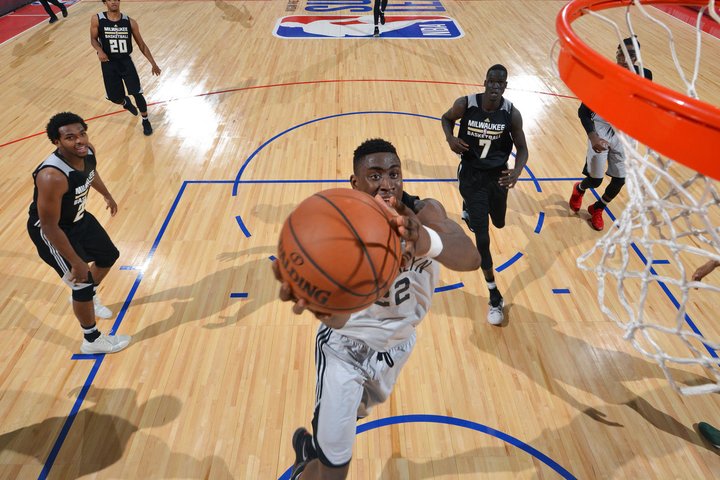 LAS VEGAS, NV - JULY 9: Caris LeVert #22 of the Brooklyn Nets goes for a lay up during the game against the Milwaukee Bucks during the 2017 Las Vegas Summer League on July 9, 2017 at the Cox Pavilion in Las Vegas, Nevada. Mandatory Copyright Notice: Copyright 2017 NBAE (Photo by David Dow/NBAE via Getty Images)
Home
Brooklyn Nets
Nicholas LeTourneau

The Brooklyn Nets followed up their first Summer League win against the Atlanta Hawks with a hard-fought loss to the Milwaukee Bucks on Sunday night. After fighting to stay in the game for three and a half quarters, the Nets eventually fell 88-83 in Las Vegas. The Bucks were paced by a breakout performance from Rashad Vaughn. Brooklyn did a great job containing everyone but Vaughn, who ended the night with 31 points and had the announcers trying to anoint him as a “Nets Killer.”

After last night’s game, one thing is for sure: Caris LeVert is ready for the season to start. He played with a level of focus and intensity that isn’t usually seen in Summer League, hustling all over the court for offensive rebounds and taking advantage of whatever the Bucks’ defense would give him. LeVert finished with 18 points, three assists and seven rebounds, while shooting 9-of-18 from the floor.

What was most impressive about his game was the fact that four of his seven rebounds were offensive. He was constantly exploiting Milwaukee’s lack of focus and experience, rushing in at the last second from the perimeter to snatch the rebound away from an unsuspecting Buck (one could almost say they looked like deer in headlights). In addition to his impressive rebounding, he did an incredible job attacking the rim off the dribble.

While LeVert played a good game overall and out-hustled everyone on the floor, it wasn’t his best outing from deep. The second-year player has a very pretty jump shot, but struggles with consistency, and last night was a perfect example of that. LeVert ended the night going 0-of-7 from deep, despite getting some good looks. It caused people to freak out on social media and discred him as a shooter, but I see it as a young guy shooting his shot in a rare exhibition game. LeVert has a clean release and followthrough; all he is missing his consistency.

I was a big fan of how aggressive he was, and I hope he continues it. Personally, I’d like to see him keep letting it rip from deep all Summer League long. These games are only about developing skills and evaluating talent. LeVert needs to iron his inconsistencies out now before he is handed the keys to a larger role when it actually counts. I have faith he will pull it all together.

You’d think by a player’s third trip to Summer League they would look a little comfortable in that setting, but that wasn’t the case for Rondae Hollis-Jefferson. Maybe it’s because he knows he has a role already carved out with the team. Maybe he just wanted to go catch a Blue Man Group show instead, but there were a lot of moments where he looked disconnected from the game.

He finished with eight points on 2-of-9 shooting from the floor to go with his 12 rebounds. Even though he still managed to pull down a lot of rebounds, Hollis-Jefferson would get lost in the shuffle of the Bucks’ offense while playing defense, and it was a constant struggle to get anything to fall from the floor.

There was one play where the Bucks ran a pick-and-pop with rookie DJ Wilson as the screener. When Wilson popped out to the three-point line, instead of following him, Hollis-Jefferson collapsed hard to the rim, leaving Wilson wide open. Thankfully, the ball-handler decided to drive the lane and forced a bad shot. There were several other small instances like that, and it just wasn’t a good look for him. It is abundantly clear that Hollis-Jefferson’s jumper is still a work in progress three years later. Unless he can get a good look in transition or take advantage of a hole in the defense when driving the paint, points from the floor don’t come easy to him.

If Hollis-Jefferson can’t score with consistency, he probably won’t be viewed as a starter in the Nets’ long-term plan. Now that Brook Lopez is no longer there to anchor the front-court, he team is in desperate need of scoring in the starting lineup. If Hollis-Jefferson can’t give it to them, Brooklyn will need to move him to the bench and start actively looking for it elsewhere.

One of the most pleasant surprises among the non-Nets players on the roster is Milton Doyle. The relatively unknown guard hails from Loyola and hasn’t wasted any of the time given to him on court. In 16 minutes played Sunday night, he finished with 13 points, one assist and four rebounds on 4-of-6 shooting from the floor and an eye-opening 3-of-3 from deep.

He looks like yet another long guard that can do a little bit of everything, and most especially, shoot from deep. He did a great job disrupting passing lanes, despite not getting a steal. There was one play where the Bucks were trying to swing the ball from the perimeter to the opposing high post for an open Thon Maker, but Doyle came out of nowhere to tip the pass out of bounds.

It’s the little things that make me want the Nets to give Doyle some extra playing time as Summer League continues and for the regular roster players to start taking less of a role. He could turn into a cheap and serviceable 3-and-D player for Brooklyn if he looks like he can play with consistency.

Spencer Dinwiddie Looks Better Than Ever

Caris LeVert might have been the best player for the Nets against the Bucks, but Spencer Dinwiddie has had the best Summer League on the team so far. In the first game against the Hawks, he ended with 10 points, three assists, three rebounds and five steals. He followed it up with 11 points on 5-of-9 shooting from the floor and two steals in the loss to Milwaukee. I could be letting how much I want Dinwiddie to succeed cloud my judgement, but when you watch him play, you can see just how comfortable he is with this team and confident he is in his abilities. In addition to having the fastest hands in the west, he’s drastically cut down on turnovers. So far this Summer League, he has only turned it over once, despite being the primary ball-handler when on the floor.

I keep seeing people on Twitter ask if Dinwiddie will even be on the roster next season, so let me say this on the subject. If Dinwiddie can keep building on this, he could be gearing up to take a major step forward as a player. His three-point shot is improving consistently, he isn’t turning the ball over, and he is locked in defensively. Pair that with how calm, cool and collected he has been on the floor so far, and Brooklyn is looking at a pretty good backup point guard. There is no question Dinwiddie belongs in the NBA, and he will soon be eliminating all doubt about whether he belongs on this roster.