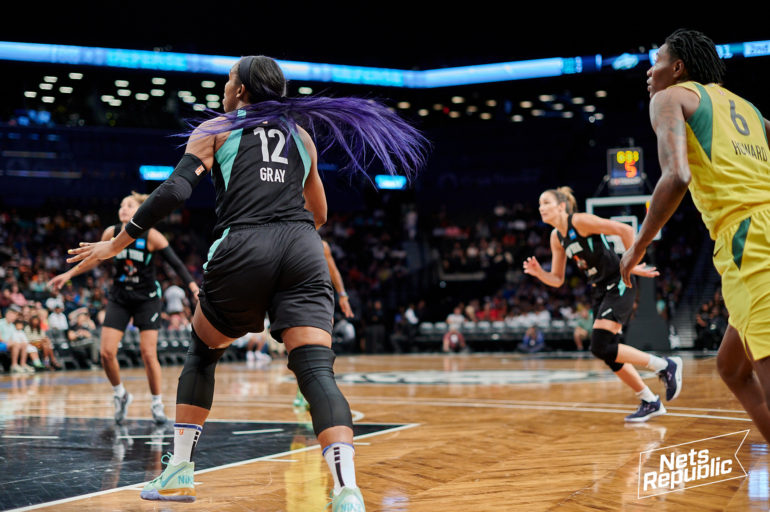 With Kiah Stokes overseas and the New York Liberty biding time until Natasha Howard heals, Reshanda Gray is ready for another tour of energy.

The New York Liberty have re-added Reshanda Gray on a “hardship” contract. It turns out, the hardship portion of the proceedings has been in name only.

“She’s definitely making me better in practice,” forward Kylee Shook said of Gray’s return as the Liberty enjoy an eight-day layover. “She’s getting all kinds of rebounds, she’s doing everything. We’ll be boxing out!”

Thus begins Reshanda Gray’s fourth tour of duty with New York, one that began with a training camp deal back in 2018. The Los Angeles native then played all 34 games of the following year in seafoam (her first WNBA regular-season action since 2016) and later returned for the first two games of 2021 while Kiah Stokes and Natasha Howard fulfilled their international duties. New York won those two to start this season, a home-and-home set with Indiana, with Gray providing interior depth by spelling Shook off the bench.&nbsp;

Even before Stokes went back overseas to represent Turkey in EuroBasket Women endeavors, the reeling Liberty (5-4) were in desperate need of interior assistance. Howard’s awe-inspiring arrival with no practice briefly stopped the bleeding, but the young paint prowlers have been overwhelmed over three consecutive defeats. An A’ja Wilson showcase (30 points, 13 rebounds in Las Vegas’ 94-82 win in Brooklyn last week) was sandwiched by tilts against Atlanta and Connecticut that saw the Liberty beaten by a combined 24-7 margin on the offensive glass. The latter was particularly brutal, as the Sun earned a 14-3 advantage in the category while adding further insult to injury through a Jonquel Jones career night.

With the Liberty seeking to counter the adjustments, no-longer awed opponents throw at them, bringing in Gray was a no-brainer. Following the Liberty’s 73-65 win in Indianapolis on May 16, head coach Walt Hopkins referred to Gray as a tide-changer, and a vital presence for Shook and DiDi Richards to look up to.

“The pace of the game changed we really got out and ran… Reshanda came in and gave us great minutes,” Hopkins said of Gray following her four-rebound showing over a dozen minutes off the bench. He further praised Gray’s ability to work the transitional offense that powered the Liberty to a hot start. “Kylee getting to see what Reshanda did and how effective it was was something we talked about after the game. I think we’ll see a little bit more of that from our group.”

Gray met with reporters on Tuesday, as the Liberty prepare for a west-coast swing that begins on Sunday in Phoenix (6 p.m. ET, YES). One could hardly tell that Gray’s re-arrival, for now, is meant to only be temporary. The seasoned veteran, adorned in a self-described “purple unicorn” hair color, was all smiles during her first public comments of 2021. Though the team is almost entirely different from her breakout campaign in 2019—only benchmate Rebecca Allen remains—Gray spoke highly of the current crop, indirectly inspiring them by mentioning that a rainbow follows every rainy day. One of her primary goals is to heighten the sense of family the Liberty have developed in a short amount of time.&nbsp;

“My job is to try to keep them level-headed and just let them know that rainy days don’t last forever,” she said. “I&nbsp;just love the energy this team and I think they’re going to do a lot of great things, whether I’m with them or not, but I’m happy to be with them but there’s something special.”&nbsp;

“I’m big on family. I believe that we have good games and we have bad games. But at the end of the day, we’re still a family and we still got to be here for each other.”

Gray believes that she can bring about the colors by providing the energy that’s come with the struggles of trying to create and solidify her spot on a WNBA roster.&nbsp;

New York has seen that brand of Gray energy before. Thrust into the startling lineup with Amanda Zahui B. competing in the 2019 EuroBasket event, a Gray double-double (13 points, 11 rebounds) was the deciding factor in a one-point win over Dallas.

It was part of an emotional evening for Gray, who not only achieved the mark in sneakers paying tribute to the late Don Brown, an assistant coach from her high school days at Washington Prep, but on a night where her fellow Cal basketball alumna Charmin Smith held her New York swan song. Smith briefly served as the Liberty’s assistant coach before succeeding the NBA-bound Lindsay Gottlieb back in Berkeley.&nbsp;

Smith’s prescience on the Liberty bench was part of the reason why she ended up becoming an east coast dweller. By all accounts, Gray has more than proven herself worthy of WNBA longevity. Working through her fifth season of regular season action (she spent last year with her hometown Sparks), Gray officially considers herself a veteran.

Unfortunately, her ongoing with New York notwithstanding, Gray may go down as a walking case for WNBA expansion: living, breathing evidence that the world’s premier women’s professional sports league should not be limited to 144 athletes.&nbsp;

Gray, however, seeks no excuses, only brandishing her trademark smile and even offering her own advice to those who seek their way into the aforementioned 144.

“For other players who are waiting for the opportunity in the 144, you got to believe in yourself, you got to know your worth,” she said. “I’m big on faith, so I pray to God every day. If it’s for me, it’s for me, and I understand that He has a purpose for me…just always keep faith, and just know your worth. Even if you don’t make this opportunity, there’s still another door that’s going to be open for you.”