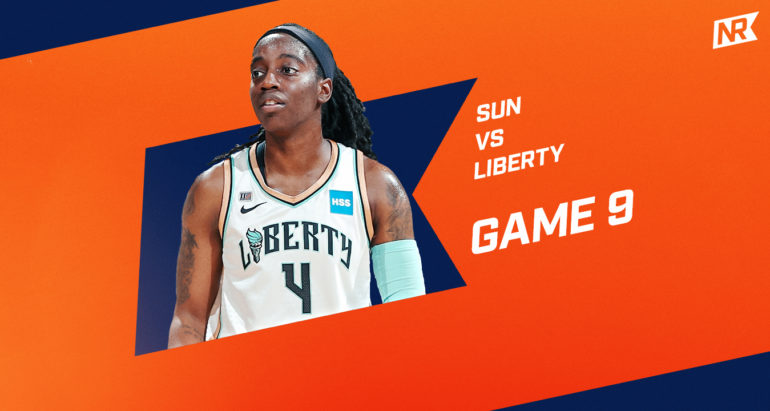 Entering Saturday’s game, the New York Liberty had lost two straight games and were looking to get back on track. Instead, they had their worst loss of the season against the Connecticut Sun and lost their third straight game.

To briefly recap, the Liberty and the Sun traded baskets in the first quarter and the Sun led by five after the period. In the second quarter, it was much of the same and the Liberty were able to stay with the Sun. They also led briefly in the second quarter with 1:40 remaining at 37-35 before the Sun went on a 6-0 run to take the lead back at 43-37. The Liberty were right there with the Sun and it was still anyone’s game at that point.

However, in the third quarter, the Sun took their defense up a notch and the Liberty did not score until the midpoint of the third quarter. The Sun went on a 15-0 run during this time. Sabrina Ionescu broke the drought when she hit a three-pointer at the 5:39 minute mark. The Liberty could not get any closer than 10 points and the Connecticut Sun extended their lead into the fourth quarter. New York lost by a final score of 85-64.

Listed below are the three main takeaways to take from the New York Liberty’s blowout loss.

Jazmine Jones has impressive effort despite the loss

Jazmine Jones was spectacular in this game.

During the second quarter, she was able to handle some of the guard duties alongside Sami Whitcomb. Both players, along with Rebecca Allen, managed to keep the game close with their timely shots, their defense, and their energy. Jones’ energy really helped fuel the fire for the New York Liberty and was one of the reasons why the game was so close at the half. Even during the third and fourth quarters, when the game was out of reach, Jones was able to contribute here and there. She finished the game with eight points on 2-for-5 shooting and three rebounds in just under 19:17 minutes played.

Betnijah Laney has started the season so well for the New York Liberty. She is playing with so much confidence and it is translating on the court. So much so that Laney was scoring 20 or more points in all eight Liberty games prior to the Sun game.

That streak snapped against the Connecticut Sun, who played excellent defense on her all night long. She was just held to eight points (4-for-12 shooting) and six assists. The Sun made it especially difficult for Laney to score inside the paint and she started being more hesitant with her drives around the third and fourth quarter, settling for outside shots which did not fall.

The Sun scouted her game well and it paid off for them. The good news is that Betnijah Laney can shake this performance off and be ready to play for the next game.

Sabrina Ionescu: Some concern is starting to creep in for Liberty

It’s no secret that Sabrina Ionescu started the season off well for the New York Liberty and has started coming back down to earth after some great performances early in the season. Teams know how to scout. They know that the key is to contain her and try their best to slow her down as much as possible.

The Connecticut Sun were able to do just that. The Sun guard duo of Jasmine Thomas and Briann January teamed up to guard Ionescu. They often double-teamed her and made it difficult for her to score and assist. She had one of her worst games of the season and was held to five points on just six shots, with five assists and three rebounds.

It’s slowly becoming a concern for the Liberty because they need Sabrina Ionescu to be involved. They need her offense as well as playmaking skills. They are already missing Natasha Howard and Laney cannot handle the scoring load all on her own. The Liberty is going to have to figure out how to get Ionescu out of traps and to execute better. Sabrina Ionescu has been given a ton of media attention, so she needs to figure it out quickly. Otherwise, it won’t end well for the Liberty.

Next up: The New York Liberty are off for six days and don’t play until next Sunday when they face the Phoenix Mercury on the road. (6 pm on YES Network)