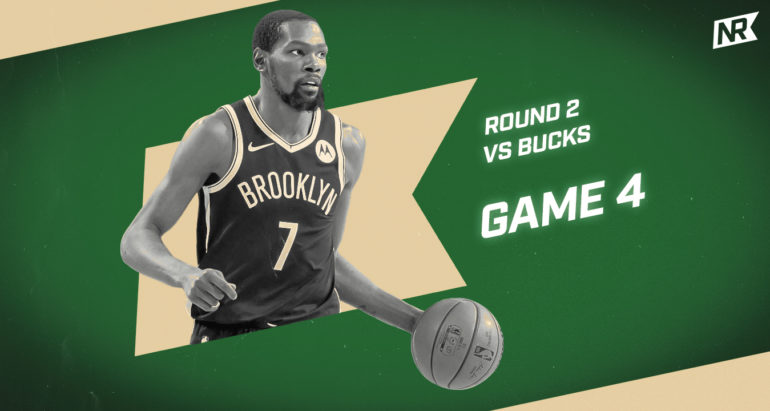 Brooklyn Nets: Takeaways from Game 4 Loss to the Milwaukee Bucks

After a close loss in Game Three of the Eastern Conference Semifinals, the Brooklyn Nets looked to take a commanding 3-1 lead. That was not the case as the Nets lost a physical Game Four 107-96.

The game started out very back-and-forth in a game of numerous runs. However, things took a turn for the worst as Nets star Kyrie Irving sprained his ankle after landing on Bucks star Giannis Antetokounmpo. After taking a 2-0 series lead, the series now heads back tied at two games apiece, with Game Five back in home in Brooklyn.

Health is a major concern for the Nets

Heading into the game, the Nets were relatively healthy. With superstar James Harden currently rehabbing his hamstring, the Nets were getting some much-needed reinforcements with the return of Jeff Green. Sadly, the worst possible scenario occurred. During the second quarter, Kyrie Irving went up for a layup that went in. However, on the way down, Antetokounmpo, in an attempt to box out Irving, slid underneath, causing Irving to sprain his ankle. Irving writhed in pain and was down on the hardwood for a couple minutes before walking back to the locker room without assistance. The Nets declared Irving out for the rest of the game after halftime.

Post-game, Nets head coach Steve Nash confirmed that Irving’s x-rays came back negative, which is some positive news. Irving will still undergo tests and treatment on Monday to determine if he plays in game five. However, Rachel Nichols of ESPN did report that Irving was in a walking boot and using crutches

With the injury to Irving, the Nets head into game five with the possibility of Irving and Harden not available. All Nets fans can do now is pray that there is positive news in the next couple of days to help bring the roster back to full strength.

Usually it is a copout to blame the referees for a bad game or a bad loss. This is a special exception. With a referee crew of Scott Foster, Tony Brothers, and Ed Malloy, one could assume things might get ugly. And ugly is a term to lightly describe how this referee crew officiated today’s game. These refs absolutely lost control of the game early, with bad calls on both teams. The referees seemingly let the teams play absolutely physical as Durant would be sent to the ground or pushed in the back on scoring attempts with no whistles blown. On the play Irving got injured, the referees held their whistle when Antetokounmpo didn’t give room for Irving to land.

Again, this isn’t an excuse for why the Nets lost the game. This is more of a complaint of a larger issue that has been bothering the NBA for the past couple years. On numerous occasions this season across the league, we have seen egregious foul calling from referees more often than not. There have been several media pundits complain about the terrible officiating as well. At some point, commissioner Adam Silver is going to have to take a hard look at the situation, because the state of officiating is hurting the product that is the NBA.

Next Man Up Has To Go On Overdrive

The phrases “next man up” and “stay ready” have been ingrained into Nets fans’ vocabulary this season with the number of injuries the Nets have faced this season. Though the Nets have managed to weather the storm throughout the regular season and to start the playoffs, this iteration of “next man up” is going to need to be on overdrive.

With Kevin Durant the only superstar available for Brooklyn, the Nets role players have to step up. Shooters Joe Harris and Landry Shamet need to get out of their respective shooting slumps, Blake Griffin will need to have another vintage performance, etc. With the series now a best-of-three, it’s going to be all hands on deck as Nets World awaits the statuses of Irving and Harden.

Nets fans should hold out hope. The team has weathered countless obstacles this season, they can do it again. It’s just this time, the stakes are just much higher.

Game Five will be played on Tuesday, January 15 at Barclay’s Arena with the time still to be determined. The Nets will also have Game Seven, if necessary, at home.