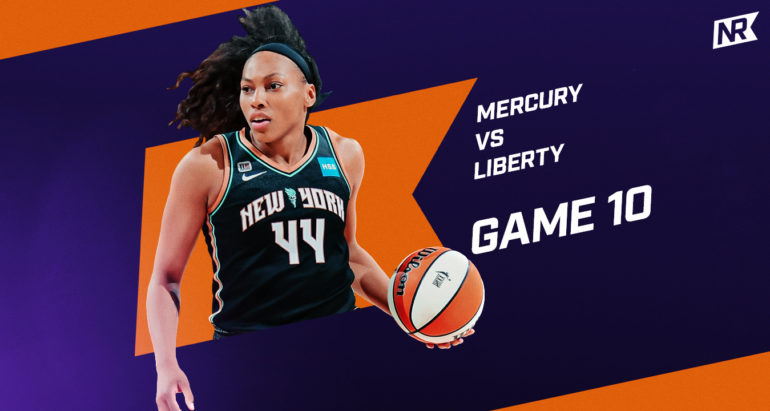 Despite Sabrina Ionescu being ruled out for the game (tendinitis, left ankle), the Liberty snapped their three-game losing streak due to strong efforts by Betnijah Laney, Sami Whitcomb, and Jazmine Jones.

Early in the day, the Liberty ruled out Sabrina Ionescu for their match-up against the Mercury. Despite participating in practices all week, the team made the decision to rest Ionescu and her ankle, which was first injured in the bubble last season. Hopkins lists Ionescu as day-to-day now, though she’s listed as doubtful for tomorrow’s matchup.

Hopkins replaced Ionescu in the lineup by sliding Sami Whitcomb to the point and adding Rebecca Allen to the starting five. Though the Liberty don’t have a “true point guard” as a backup on their roster, Whitcomb, along with Laney, Jones and even DiDi Richards have initiated the offense while Ionescu sat in previous games.

Here are three takeaways from the New York Liberty’s 85-83 win against the Phoenix Mercury.

The Liberty came into today’s game on a mission. After struggling to get things going in their previous three games (all losses), New York had their best first quarter of the season, outscoring Phoenix 26-14. With Rebecca Allen inserted into the starting lineup, the Liberty added some more size. Though Allen would grab two early fouls, strong showings both offensively and defensively from Kylee Shook and (the recently re-signed) Reshanda Gray added much need help inside against the Mercury’s Brittney Griner. The Liberty would shoot 50 percent from three-point range, while Laney notching 10 points and New York matched Phoenix with 12 rebounds apiece.

After a balanced second quarter, the Liberty led by a dozen at halftime. In her lead guard duties, Sami Whitcomb provided a defensive stopper at the point. Whitcomb contributed three steals in the first half against just two New York turnovers.

The Liberty struggled to reclaim their rhythm at the start of the third quarter. Their halftime lead dwindled away and by the 5:38 mark, Phoenix tied up the game at 51, aggressively recommitting to playing through Brittney Griner. A Rebecca Allen three-pointer would be the Liberty’s only bucket for nearly six minutes.

With 43 seconds left in the third quarter, Jazmine Jones would enter the game. In this quarter, the Liberty were outscored by Phoenix 25-19, cutting the deficit in half leading into the final 10 minutes. Despite a poor first half (going one-for-seven from the field), Jones’ confidence shined for the remainder of the game. In the fourth, she would would hit five of six shots and score 14 of her 16 points (and 14 of the team’s 18 in the final quarter). Jaz Jones finished with a season-high of 16 points and 7 rebounds to put New York on her back and help the team snap its three-game losing streak.

With Kiah Stokes heading out for Eurobasket, it was inevitable that Gray would return to the Liberty, albeit for a limited time. Just like during her two-game stint at the beginning of the season, Gray would be without the services of Natasha Howard. Gray’s first assignment, contain Brittney Griner, then head out to Las Vegas to face Liz Cambage and A’ja Wilson. Twice.

Though Griner still put up 29 points and 14 rebounds, Gray’s peskiness and hustle was immediate. She brings a stronger presence to the paint for New York. In roughly 18 minutes in her return, Gray was key to the Liberty’s victory and will be a factor in their back-to-back games against the Aces. Despite the limited action, she scored eight points on three-for-seven shooting and pulled down five rebounds, including a couple of consecutive post-ups in the third quarter to steady a floundering offense. Gray’s impact on New York was immediate, and a great reminder why they brought her back.

Laney’s streak of consecutive 20-point games was halted last Saturday against the Connecticut Sun. No need to worry, she bounced back nicely and started a new streak. On Sunday night, the MVP candidate brought what might be her best performance of the season: 23 points, 10 assists, and seven rebounds while shooting 9-19 from the field with just one turnover. Laney’s currently fourth in the league in scoring (21.0 points per game), second in minutes per game (35.0), while shooting 48.7 percent from the field and averaging 5.4 assists and 4.2 rebounds per game. Ten games in, she’s a top-tier MVP candidate along with Seattle’s Breanna Stewart, Connecticut’s Jonquel Jones, and Washington’s Tina Charles.

Next Up: The Liberty travel to Las Vegas to face the Aces on Tuesday (10pm on ESPN3)