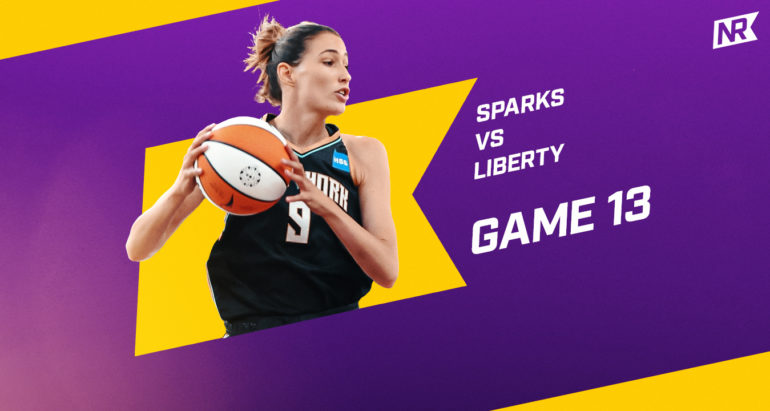 A quarter-century ago, in a battle of the coasts, the WNBA tipped off. On that day, these two original teams—the New York Liberty and the Los Angeles Sparks—played a sloppy game that would not be remembered for its quality, but for its footprint, which is cemented into the cathedral of professional basketball.

For the league’s silver anniversary, these two franchises ran it back and, again, the game wasn’t representative of the sport as its purest. The turnover-heavy contest, while at times doubling as a game of hot potato, was competitive throughout. After battling back and forth for 40 minutes, the Liberty (7-6) emerged victorious over the Sparks (5-7), by a score of 76-73.

We’ve got to begin at the end. Twenty-four-point-three seconds to go, Los Angeles ball. New York clinging to a one-point lead. Erica Wheeler brings the ball up and probes the defense for an easy attempt, but Betnijah Laney stays strong between her and the basket. Wheeler backs up into the corner, while a screen action happens at the top of the key. Nia Coffey sets a strong pick for Kristi Toliver, but Bec Allen fights above it, just barely slithering over the top. Toliver peeks back to see that, puts up a quick pump fake, and Allen goes flying across. Toliver takes a quick dribble left into a stepback, but in the time it takes her to make her move, Allen plants and pushes back to close out. With her left hand extended, she blocks the shot. (The recovery time here is incredible!) In the scramble to get after the loose ball, Toliver kicks out her foot and trips Bec, who is awarded two free throws to push the NY lead to three.

“Well, she’d done a few of them already this game,” Allen told Nets Republic postgame. “We know she likes going to the left, so I was really trying to get my arm across to that. I was really grateful that I did have my length in that moment.”

Still, after the free throws, enough time remained for another possession. This time, Wheeler takes the inbound. Who was tasked with checking the point guard? Bec Allen. At this point in the game, with the lead now three and the game clock under 10 seconds, the Liberty knew the Sparks would have to shoot from deep. Wheeler takes two quick dribbles and pulls from the top of the key.

Again, Allen rises. Again, she gets a hand on it.

The game isn’t quite over yet. Wheeler sticks with the play and chases down her own rebound, kicking the ball out to Coffey for a last-second heave. Liberty rookie Michaela Onyenwere is caught out of position going for the decisive rebound, so Coffey has daylight to shoot. Her look is mostly clean, but right as she rises up, a Liberty player sprints over from the top of the key to offer any disruption she could. At this point, you know who it was: Rebecca Allen again. Coffey’s attempt is no good and the final horn sounds.

Last game, Allen told the media that she was “blessed with long arms.” The New York Liberty players, coaches, and fans were all grateful for that blessing after her game-saving plays on Sunday afternoon.

Mitigating the Turnovers with Second Efforts

It’s remarkable that New York was able to escape with a win, despite their 29 turnovers. It wasn’t even that Los Angeles shot poorly: the Sparks hit 45.6 percent of their shots, including seven more makes from the field than the Liberty. Though LA had 18 turnovers of their own, they were still +11 in that category.

New York managed to find success in using Los Angeles’ ultra-aggressive strategy against them. All game, the Sparks threw lots of pressure at the ball and swarmed passing lanes. While this helped to generate fast break opportunities, it often put them out of position when the Liberty did get shots up. The players recognized this and crashed the boards.

“It was one of the counters to that pressure,” Walt Hopkins said after the game. “We’re normally more concerned about getting back defensively than we are about crashing the offensive boards and we normally send one. Today, I thought that the team—they did that. I didn’t tell them to counter like that, they saw it. Once I saw them doing it, I said do it more. They sniffed it out really early, and once they saw that it was possible, they just kept pounding.”

New York won second-chance points 19-0. In a game in which the Liberty assisted on 75 percent of their made field goals, some of their cleanest looks came off those offensive rebound kickouts.

The Liberty have been a very streaky team this season. They’ve gone through large scoring droughts, but have proven to be resilient in clutch time. Throughout the season, that has come by putting the ball into Betnijah Laney’s hands, but on Sunday she struggled holding onto the ball. For just the third time this season, Laney finished with fewer than 20 points. She scored 14 on six-of-10 shooting, with five rebounds and five assists, but a difficult-to-swallow nine turnovers. Six of the eight members of the Liberty that saw the floor against LA turned the ball over at least three times.

This bucket put the Liberty ahead with just over two minutes to go. The next time down the court, she would draw a foul and hit two free throws that cushioned NY’s lead. Just remember all this when you’re filling out your daily All-Star ballots.