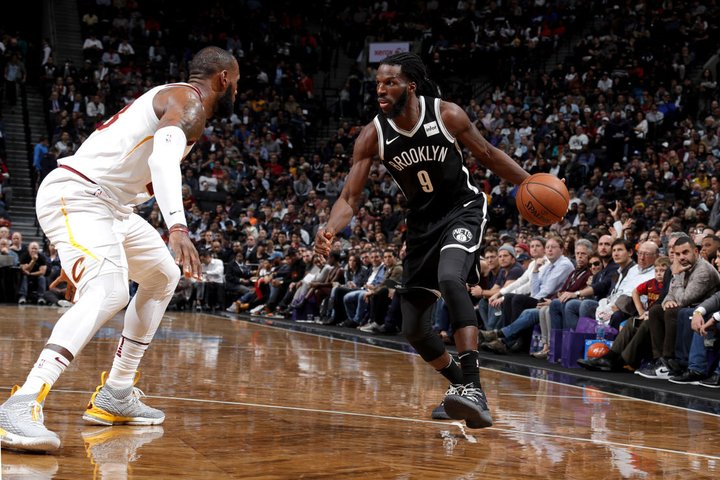 BROOKLYN, NY - OCTOBER 25: DeMarre Carroll #9 of the Brooklyn Nets handles the ball against the Cleveland Cavaliers on October 25, 2017 at Barclays Center in Brooklyn, New York. NOTE TO USER: User expressly acknowledges and agrees that, by downloading and or using this Photograph, user is consenting to the terms and conditions of the Getty Images License Agreement. Mandatory Copyright Notice: Copyright 2017 NBAE (Photo by Nathaniel S. Butler/NBAE via Getty Images)
Home
Brooklyn Nets
Brooklyn Nets Analysis
Francis Adu

No Jeremy Lin? No D’Angelo Russell? No struggling, and no tussle. Without their opening day starting backcourt, the Brooklyn Nets still rattled off a completely routine and totally unsurprising 112-107 home victory over the defending Eastern Conference champions Cleveland Cavaliers. Yes, the Cavs and Nets are now tied at 3-2 in overall standings. The Nets withstood a very frustrated LeBron James and his 29/10/13 on 20 shots statline. Brooklyn is all-powerful now. Or at least until Friday.

The Nets really only had one player available in the game who could dribble consistently without stumbling into the Hudson. So, thank Christopher Wallace that one player had decided to have the game of his life. This player, Spencer Dinwiddie, scored a career-high 22 points on 7-of-13 shooting from the field to make the most of his 20th career NBA start. Dinwiddie would eventually cap the hallmark performance with two massive threes in the closing stretch of the game to parry a Cleveland comeback.

The four-year veteran adjusted to the Cavaliers’ defensive game-plan of packing the paint by making the open jump shot looks Cleveland allowed. Dinwiddie is a master of understanding his limits and making patient decisions with the ball in his hands. Instead of trying to match Lin and Russell’s usual dynamism off the dribble in the usual Brooklyn frenetic pace, Dinwiddie worked more clock in the half-court to prevent turnovers. The 6-foot-6 guard proved he had the true versatility to run effective offenses for stretches.

Take Them While You Can

The Nets broke a franchise record after launching 46 threes over the Cleveland defense. As mentioned before, the Cavs’ strategy of aggressive interior crashing likely encouraged the downtown onslaught. However, the Nets also persisted with a strategy of prioritizing threes off live ball turnovers.

If the Cavs’ defense could set itself in the half-court before the Nets’ clumsier set of ball-handlers could initiate a transition opportunity, the Nets’ half-court offense often struggled (especially when Dinwiddie sat). However, diligence in transition defense has not been Cleveland’s forte in this second LeBron era. Therefore, the Cavs had great trouble adjusting from jogging back to realizing the Brooklyn transition outlets will not be diving to the rim, but instead all flanking out on the wings for threes. Brooklyn usually keeps aggressive from long-range, but this adjustment from relying on dribble penetration to create the open looks should be a feather in Kenny Atkinson’s cap.

The largest enactors of the aggressive transition threes strategy for Brooklyn ended up being the two highly-paid new wing additions in DeMarre Carroll and Allen Crabbe. The duo combined for 37 points on 7-of-19 shooting from beyond the arc to supplement Dinwiddie’s career night. The lack of fear in putting up any looks with a sliver of daylight punctuate all the optimistic hopes of Carroll and Crabbe’s potential offensive contributions.

Crabbe managed to make his dreadful shooting performance in Orlando look like the exception, not the trend. It boosts morale tremendously to have a sharpshooter who can serve a reasonable counterpart to the shooting exploits of the renowned Kyle Korver on the Cleveland end. More nights of 19 points on 14 field goal attempts will have general manager Sean Marks looking like a sage for valuing Crabbe so highly.

Carroll has looked rejuvenated in Brooklyn after facing the slight of being a salary dump for an Eastern Conference championship-hopeful Toronto Raptors squad. Carroll battled LeBron and Kevin Love admirably all night on both ends of the court. Carroll, of course, did not win his overall matchup with LeBron, as few in history ever have. Yet, Carroll held enough ground to not entice too many LeBron forays in the paint and to disrupt enough Cavs ball movement to contribute heftily to the 21 Cleveland turnovers. The signature play of Carroll’s night came when he soared for a game-clinching seventh rebound off a LeBron bricked free throw among the Cavalier giants.

Do not look now, but Rondae Hollis-Jefferson has started the 2017-18 season with never-before-seen confidence and success. The sample size still remains small enough to reign in any drastic shifts of opinion on RHJ. However, when have we ever seen RHJ confident enough to take eight jump shots in a game, let alone make four of them?

Not only has RHJ found the willingness to pull up on his frequently open looks, but he has also been quite aggressive in getting contact for fouls, despite still not having the handles to gain much depth in the paint for layups. Shooting two free throws for every three field goal attempts is a nutty rate to sustain. Especially since he is currently 27-of-30 from the charity stripe this season (90 percent for the long division-loathing). Although he knocked down both threes against Cleveland, expecting Hollis-Jefferson to join Atkinson’s hellfire scheme from deep remains unlikely, as the two makes established him as just 2-of-3 from deep for the year. Still, RHJ currently hovers around 20 points per game per 36 minutes for the 2017-18 season. What a world.