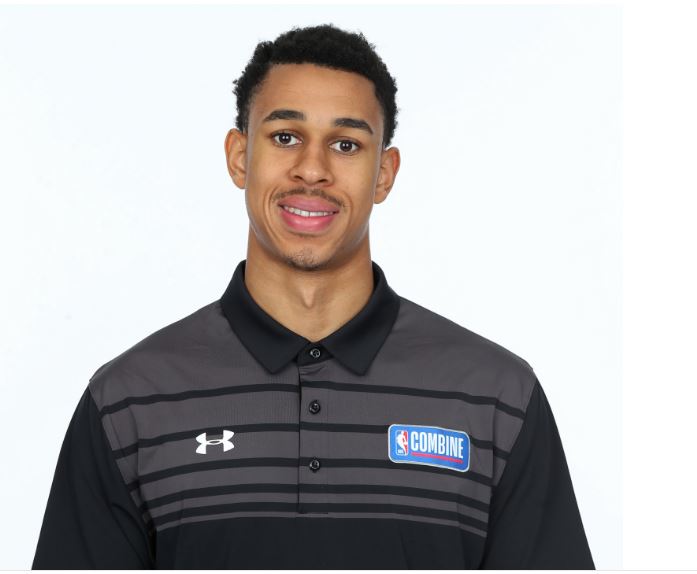 There is no way Zhaire Smith anticipated a year ago he would be looking at a likely first round selection immediately after his freshman year at Texas Tech. Zhaire had not sniffed top-100 status in his recruiting class and had not even been starting for the Texas Tech Red Raiders at the beginning of the 2017-18 NCAA season.

Now, the soon-to-be 19 year old has begun to tantalize the scouting masses just off his highlight reel of gravity-defying dunks and blocks. The shooting guard from Garland, Texas stands at 6’4″ and 200 pounds with a 6’9.75″ wingspan (via the NBA Draft combine). He accrued 11.3 points per game, 5.0 rebounds a game, and 1.8 assists per game with 55.6/45.0/71.7 shooting splits in his only season in Lubbock.

So how to approach Zhaire Smith? The best way to describe him is a player with a guard’s body, an elite big-man’s mind, and potential weakness if asked to play as a traditional wing. Unlike the vast majority of guards in this draft class, Zhaire did not function in a high usage role for Texas Tech. Instead, he played almost every off-ball role one could think of besides a Kyle Korver-esque shooter off screens.

Zhaire could be found spotting up in corners waiting for a pass for an usually open jumper. The guard shot just 101 jump shots from mid range or three point range in 2017-18 but made over 40% of them.

He could be found eagerly screening for any teammate that wanted some separation or perch himself in the high post awaiting a pass to then look to make a decision out of the triple threat. Impressively, Zhaire maintained an assist-to-turnover ratio above 1.5 to 1 in his low usage role. He could be found torpedoing into the sky after every shot attempt for the chance of nabbing an offensive rebound over the usually bigger denizens of the paint. The 6’4″ Smith finished in the top ten in total offensive rebounds in the Big 12 in 2017-18.

He could even be used as a traditional pick and roll roller who can elevate for finishes if his elite burst gets him to the rim before help arrives. Zhaire readily performed all these tasks with frequently impressive success. He just might not be able to dribble or shoot.

Questioning Zhaire Smith’s shooting ability looks suspect after knowing he shot 45% from three for his freshman season. However, the concerns remain valid. Zhaire’s shooting motion varies way too often to have confidence in its consistency. At times, he will shoot it over his forehead. Other times, he pushes the ball out in front of him before releasing.

Almost always, he looks a bit stiff and unnatural with his lower body in ways that implies squaring himself to the hoop takes a bit of effort and time. Even his free throw routine has avoided consistency and thus his free throw shooting has as well. Being able to make as many shots as he did in the season bodes well for Zhaire at least making NBA corner threes if left wide open.

However, the map to whether Zhaire can release his jump shot with any versatility, despite flashing a step back mid range jumper, remains littered with road forks. His young age and accelerated development may lead to ironing out the negatives or the negatives may prove him to be a liability for spacing purposes.

Zhaire also will need great improvement in his ballhandling to fulfill the promise his amazing athleticism hints at. Zhaire had some stints as lead guard for the Texas Tech offense because of injury emergency. These stints led to mixed results in terms of his ballhandling adeptness.

Zhaire’s elite first step sometimes getting him past defenders off a straight line drive or split traps or his lack of advanced moves causing him to pick up the dribble and beg for safety valves. Smith would not need a Kyrie-level toolkit of dribble moves in order to thrive getting to the rim with his first step and sudden acceleration ability. However, he does need more to bank on to lose predictability.

Zhaire also needs more finishing craft around the rim. His elite vertical explosion allows for plentiful dunks, but he struggles on runners and relies heavily on the jump-stop and pump-fakes once the paint isn’t clear. The pump-fakes may lead to some welcome fouls for less disciplined defenders but other NBA defenses will scout him and force him to prove his skinnier body can finish through contact. The results in the half court do not point overwhelmingly positive in that regard.

However, Zhaire can potentially dash any negatives he provides with the ball with the work he could do guarding said ball on the other end of the court. Zhaire’s explosiveness translates just as well defensively as he emerged as a legitimate chaos creator. The Texas Tech defense ranked one of the best defenses in the country all season. Zhaire’s aggressive help instincts were a big reason why. The, again just 6’4″, guard acted as perhaps the best weak side rim protector from a perimeter position in the country.

Smith also excelled as a transition defender and showcased outstanding motor and speed for someone who crashed the offensive glass as often as he did. His ability to swipe for deflections also generated much needed transition opportunities for the offensively-middling Texas Tech offense, opportunities he also excelled at finishing. Zhaire can slide with almost all guards who take him off the dribble, although he occasionally took an ill-advised angle with his slides that presented driving lanes.

However, Zhaire will need to gain strength and awareness in order to not get swallowed up in screens as often as he does. Plus, Zhaire’s size makes asking him to guard high-usage forwards a tenuous task, despite his willingness to play physical. The occasional mental errors and non-ideal size makes Zhaire not an instant bet to be an elite-impact defender but his help instincts and athleticism definitely hint to the possibility.

Victor Oladipo or bouncier Dennis Johnson. Finding a player of Zhaire’s archetype is quite difficult due to his unique blend of instincts, athleticism, yet smaller size. However, the Sonics and Suns days of nine time All-Defensive Team member and two-time All-NBA player Dennis Johnson might be the closest approximate to what Zhaire could do. There also is a chance Zhaire’s ballhandling and jumpshot improves similarly to how Victor Oladipo’s did. Uniqueness tends to be a virtue for NBA prospects.

Does Zhaire make a great match with Brooklyn and Marks in terms of need and value?: Zhaire’s unique talents and questions make him a mystery fit for almost all teams, but his potential impact makes him too good of a value to ignore with the 29th overall pick. Coach Atkinson has done well to balance emphasizing his players’ strengths while slowly pushing the boundaries on their tendencies and that would probably be the ideal environment for Zhaire to flourish in.