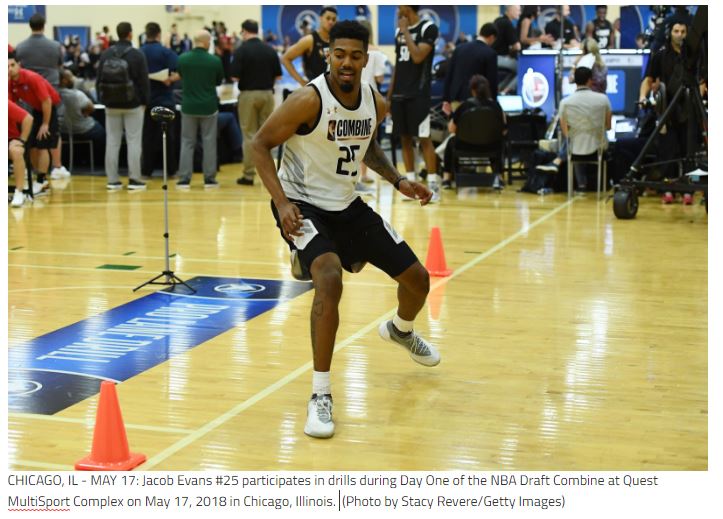 Jacob Evans came into his junior year at University of Cincinnati with some 1st round draft pick buzz. That buzz maintained as the 20 year old Bearcat helped to lead Cincinnati to a 31-5 record and a 2 seed in the NCAA tournament in 2017-18.

The prototypical shooting guard stands at 6’5.5” and 200 pounds with a 6’9.25” wingspan per his NBA Combine measurements. The Baton Rouge, Louisiana native averaged 13.5 points per game, 4.7 rebounds per game, and 3.1 assists a game with 42.7/37.0/75.4 shooting splits his junior season. Evans also became one of just 28 players in the NCAA last season to record at least 35 blocks and 35 steals in the season. That defensive prowess is the key to understanding the value of Jacob Evans.

Jacob Evans has intrigued NBA scouts so much because of his potential to thrive in the white whale role of the 3-and-D player. Evans finished his Cincinnati career with 37% shooting from beyond the arc on 4.4 attempts a game. Via Will Schreefer and The Stepien’s shot tracking chart, Jacob Evans shot 40.2% on all NBA range threes as well. His career 75.5% free throw shooting also indicates decent consistency with his shooting motion.

With his 6’6” height and solid elevation on his jump shot, Evans should be able to shoot over most NBA athletes guarding him.  While Evans remains inexperienced in shooting jumpers off screens and other off-ball motions, he did manage to go unassisted on 26.7% of his total makes in 2017-18 (via Hoop-Math). This points to some shot creation equity in a secondary role or in late clock situations.

Evans as a secondary playmaker should also prove helpful in transition where he has enough ballhandling and athleticism to beat retreating defenders down the court for good scoring chances. If not leading the fast break himself, Evans has enough vertical explosion off two feet to catch lobs to finish off cuts. Evans makes rather heady passes with the ball while avoiding turnovers. With his head always up for open teammates, teams can trust Evans to attack a closeout from the perimeter and not gain tunnel vision in the process.

The main struggles Evans will face offensively are creating consistent separation from NBA athletes as a higher usage playmaker and altering his shot selection a bit when he does lose the separation battle. Evans frequently had issues making it all the way to the rim off the dribble in his three years at Cincinnati. His handle did not create enough shake to unbalance opposing defenders and his first step remained below-average to physically cap his elusiveness too.

Evans’s mediocre free throw rate of .302 and free throw volume of only 3.2 attempts a game in 2017-18 highlight his struggles to beat his man even with a screen as aid. Also worryingly, Evans had a great habit of giving up early on chances to probe defenses in order to take ill-advised pull-up jump shots from the mid range.

The pull-up jumper off a hesitation dribble is a favorite of Evans’s and, while a very nice weapon to add to the arsenal, Evans tends to rely on the jumper too often in lieu of patience. While Spencer Dinwiddie probably has a bit more quickness off his first step than Evans does, a key reason why Dinwiddie succeeded in 2017-18 is he had the patience to probe a defense again when his initial drives failed to offer much. That patience would serve Evans well if he wants to add more dynamism to a NBA offense. Especially if Evans cannot improve upon his combined 35.2% from all mid range attempts he had in his three years at Cincinnati (via Hoop-Math).

Thankfully, despite these questions, Jacob Evans also displays impressive acumen on the defensive end of the floor. Cincinnati head coach Mick Cronin runs one of the most similar defenses in the NCAA to the switch-heavy schemes becoming in vogue in the NBA. Such switch-heavy schemes require a ton of defensive discipline, energy, and on-point communication and Evans often shined in all of those regards. Evans had one of the best senses in this prospect class on when to jump passing lanes or to anticipate a beat assignment and when to not freelance off his own assignment.

The IQ he shows reading the floor on passes often repeats in how he reads offenses and reacts accordingly. Evans will not likely be a lock down defensive stopper as a wing as his quickness mirrors the effectiveness of his meh first step and his 6’9.25″ wingspan rates as solid for a shooting guard but non-elite and a bit lacking to bother the majority of NBA small forwards. However, Evans does possess good strength in his wiry 200 lb. frame and has an admirable motor when engaging on-ball. Opposing perimeter players will not be able to plow straight through Evans and, with his instincts guarding off-ball plays, that makes Evans a definite plus projection on the defensive end.

Current Draft Big Board Rankings: 15th via The Stepien, 22nd via ESPN/DraftExpress, 20th via The Ringer, 19th via The 94 Feet Report, 38th via Sports Illustrated, 33rd via CBS Sports

Does Evans fit Brooklyn in terms of need and value?: Yes, Evans would be a great value and fit at 29 if Marks chose him there. Evans could instantly become the best off-ball defender on the Brooklyn roster while offering some shooting insurance in case Joe Harris and Nik Stauskas do not return in free agency. Every team can use smart wings with shooting and, while Evans almost certainly will not become the star Brooklyn yearns for, the Nets are not an exception to that rule.