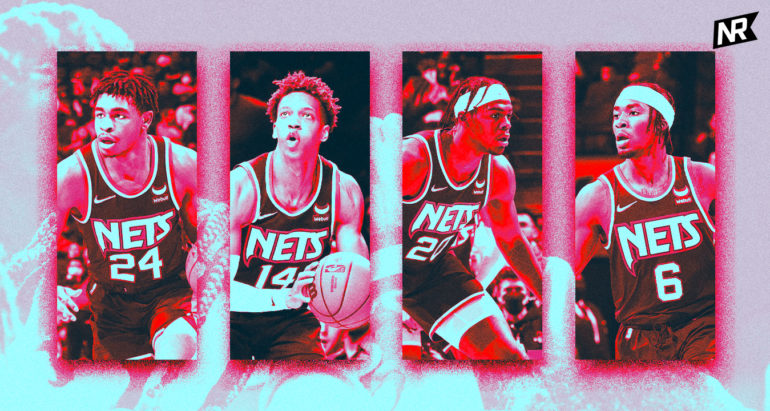 With the Nets’ rollercoaster of a season coming to an embarrassing end in the first round, Nets fans have to to endure a wave of media criticism and slander, with echoes of “I told you so” coming from every angle. It didn’t help to see former disgruntled Net James Harden advance further in the playoffs, though his dud of a performance in Game 6 against the Heat may have helped to alleviate the sting for some.

Now, over two weeks removed from the Celtic sweep, the mourning period for Nets fans is just about over and they have shifted to offseason mode. With a plethora of roster changes set to happen, I decided to take a look at Brooklyn’s rookies including how their respective seasons went, breaking down areas of strength as well as focuses for improvement, and then analyzed what their potential future could hold with the team.

Bill Russell once said, “This game has always been, and will always be, about buckets.” No player on the Nets has taken this proverb to heart more than Cam Thomas. Well, aside from Uncle Drew himself. This season Cam showed why he was one of the best scorers in college as well as Oak Hill Academy’s all-time leading scorer.

Cam’s offensive bag is surprisingly deep for a player so young. He can score from anywhere on the floor… though a majority of his damage comes inside the three-point arc. That isn’t to say Cam can’t hit threes (we all saw his dagger in that Knicks game) but he struggled mightily with the long range ball for the majority of the year, shooting a measly 27 percent from deep.

The mid-range is where Cam thrived. Cam was amongst the league’s best from that area, shooting it at 49.7 percent (72-for-145) which had him sitting at the same table as the likes of Kevin Durant and DeMar DeRozan. Part of the reason for his success at this range is due to his ability to utilize his strong lower to body to work to his spots and the lift he gets when he rises up. And, of course, some genuinely unorthodox shooting angles when he leaves his feet. His handles aren’t the tightest, but they’re good enough to get him where he needs to go in the half-court.

As exciting as Cam can be on offense, he still has massive room for improvement. Gaining better proficiency in the catch-and-shoot (C&S) is a start. The former LSU Tiger shot just 29.3 percent on C&S field goals (28.7 percent on C&S threes) last season.

Passing and decision-making are also areas of improvement for the youngster. Too often Thomas would succumb to tunnel vision with the ball resulting in unnecessary isolation situations or poor passes in traffic. With the Nets having a lack of ballhandling and facilitating depth last season, the team could really benefit from Thomas making strides here.

The one glaring—and I mean glaring—problem for Thomas is his defense. This usually happens with most young players who are pure scorers, but it was particularly noticeable for Cam. It wasn’t even a case of him just not caring about defense either. More often than not, the effort was there, but his lack of fundamentals and discipline ultimately turned him into a turnstile while guarding on-ball.

Off-ball was an adventure as well. Too many times, Cam looked completely lost in his rotations and appeared unsure whether he should do things such as come over to double, tag the roller, etc. In his defense (no pun intended), you could probably say that about three-quarters of the Nets players on that end of the floor this past season.

Cam’s ability to score the ball is what makes him such a tantalizing trade piece for Brooklyn if they were to explore that option. Barring a Desmond Bane or Tyrese Maxey type of leap in Summer League, the Nets may not have time to develop a young guard under 6’4 who’s a defensive liability. Yes, the objective of basketball is to put the ball in the hoop, but there are other factors that go into winning and the Nets need more from a guy who’s just a one-way player. There are already some heavy bucket-getters on the team.

Of all the Nets rookies, Kessler Edwards is the guy that fits their needs the most moving forward. As a 6’8 forward with a 6’11 wingspan who possesses athleticism all while being able to defend and shoot the three, he has the prototypical body and skill set for today’s NBA. You may recall early in the year fans were begging and shouting into the ether for Kessler minutes from Steve Nash. Once Nash obliged, Kessler had a great stretch of games, especially during the Nets’ COVID phase.

Around mid-January however, the rookie wall hit Edwards, and it hit him hard. With his confidence shaken, Edwards’ shot and aggressiveness left him, and his minutes dwindled before ultimately resulting in a string of DNPs. Edwards would bounce back toward the end of the season with a rash of strong performances. HE was signed to a standard contract after the team waived veteran forward James Johnson.

Kessler’s offensive game for the most part was pretty black and white. Of his 267 total field goal attempts, 136 were from beyond the three-point line. And of the 131 two-point attempts only 29 came from the mid-range. A stark difference from rookie teammate Cam Thomas.

The mid-range is actually an area in which Edwards could explore more. Per NBA Stats, Kessler shot a modest 48.3 percent (14-for-29) from that area. Although at times it seemed as if Kess couldn’t throw a bowling ball into the ocean, he still finished the season shooting a respectable 35 percent from distance. On C&S threes, Kessler knocked down 35.8 percent. Ideally, Edwards finds himself in the high 30s/low 40s range like some other notable 3-and-D guys like Robert Covington or Dorian Finney-Smith.

Touching on Kessler’s innate abilities, it’s fair to say he is one of Brooklyn’s better athletes. He’s got length and has a surprising spring to his jumps, with a quick second jump that comes in handy when going up for rebounds. For a guy with as much bounce in his step, it was frustrating to watch the stretches in which he struggled to finish around the rim. At points, it almost seemed like he didn’t know whether to dunk the ball or lay it in which resulted in some hair-pulling point-blank misses. Perhaps a push shot could be added to the arsenal, similar to what Memphis’ Brandon Clarke has.

Defensively, Edwards was probably Brooklyn’s third-best perimeter defender behind Nic Claxton and Kevin Durant. His ability to stay in front of guards and wings is exactly what the Nets need. He’s not afraid of any matchup and had some eye-catching moments against some of the league’s premier stars, including DeMar DeRozan and even Giannis(!).

This isn’t to say he is without shortcomings. Despite his build, he needs to get stronger. There were plenty of times where he would just be physically overmatched by other forwards taking it right into his chest or backing him down deep into the paint. And even though there’d be times he looked lost in rotations, Edward’s weak-side defense was pretty solid all things considered. There’s ample room for growth, but the potential to possibly become an all-defense caliber defender is there.

Edwards does have qualities that would make him an enticing trade chip; however, I think it would behoove the Nets to hang on and develop the kid who could prove to be an integral part of a championship pursuit.

Probably the most intriguing of the Nets’ young bunch is Day’Ron Sharpe. He is a guy who always seems to wear a smile on his face whenever he’s on the bench. On the court, though, it’s a different story. Sharpe has a grittiness and a tremendous motor that this organization sorely needs.

Rebounding is where Sharpe thrived but most notably on the offensive glass. Per Cleaning the Glass, Sharpe’s offensive rebounding percentage (20.3 percent) ranked in the 100th percentile, while his offensive rebounding percentage on free throws (6.2 percent) ranked in the 82nd percentile. On the season, Sharpe averaged 6.2 points and 5.0 rebounds in 32 games with a “per 36 minutes” average of 18.2 points and 14.7 rebounds.

Sharpe can also surprise you with his scoring ability here and there. Every other week, it seemed like the North Carolina product was putting up gaudy numbers in the G-League. Ne flashed it at times on the big stage, too, most notably in Brooklyn’s blowout win against the Bulls in which he dropped a career-high 20 points.

Despite not being your prototypical lob threat Nets fans have come to know from their centers as of late, Sharpe has shown flashes of an outside shooting touch but will need to expand upon it given the team’s constant thirst for a guy with stretch big capabilities.

The biggest issue with Day’Ron is his fouling. It’s hard to make much of an impact if you’re on the bench in foul trouble. Just ask Knicks center Mitchell Robinson, who struggled with foul woes early in his career. Sharpe and Nic Claxton are polar opposites when it comes to the defensive end. Claxton is a switch big who guards the perimeter well, but isn’t that strong a rebounder; Sharpe gobbles up boards, but is best suited as an interior presence.

Although on the smaller side height-wise (6’9), Day’Ron measures in around 265 lbs, bigger than some notable centers like Clint Capela and Rudy Gobert. He’s not that fleet of foot when it comes to guarding the perimeter, and he struggled last season defending pick and rolls. He will have to work at trusting his size, because he found himself leaving his feet or reaching too frequently as a rookie.

Brooklyn certainly has some decisions to make in regard to the frontcourt depth, with pieces like Claxton and Andre Drummond, as well as the possibility of additions through trades or free agency. The fact of the matter is the Nets need rebounding and Sharpe provides that. Ironically he is the only big under contract heading into next season.

Duke only saw a handful of action with the big club and had his spattering of moments. The undrafted guard out of Providence appeared in just 22 games for Brooklyn as a two-way player, most of which came during the Nets’ COVID outbreak early in the season. His 18-point, 14-rebound performance in a December matchup against the Magic was the high point of his season.

If there’s one thing Duke, Jr. isn’t lacking, it’s hustle and effort, two traits that this team over the course of the year desperately lacked. The only problem is that his game is lacking in other areas. His shooting ability to this point is spotty at best, connecting on only 24.3 percent of his three-point attempts and 36.1 percent from the field.

Defensively, Duke, Jr. is solid. Not a lockdown, but certainly not a turnstile. The only problem is his size. He measures in at 6’4, the same size as Cam Thomas and Bruce Brown. However, he can’t score with the ease which Cam can and he doesn’t have the intangibles that Brown delivers. If I was a betting man I wouldn’t put much stock in DDJ being a contributor for this team next season.