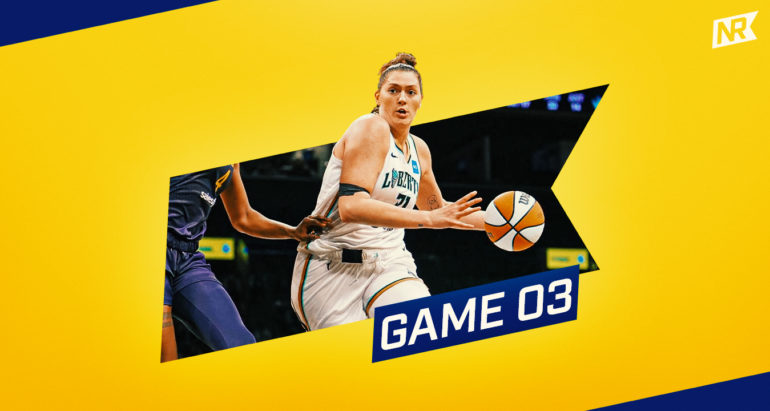 Aside from Sami Whitcomb’s struggles from the perimeter (she is shooting a career-low from three on a small three-game sample), the six-year veteran has continued to be the anchor Liberty fans are accustomed to. As a supplementary ball handler, particularly when either of Sabrina Ionescu or Betnijah Laney go to the bench, Whitcomb has a knack for knowing when to make the right play. Unfortunately in last night’s overtime thriller against the Indiana Fever, Whitcomb made several mistakes down the stretch with the ball in her hands, two of which included telegraphed passes that were picked off by defenders. Her most egregious error came at halfcourt near the end of regulation when she threw an errant pass backwards which could have resulted in a game-losing basket the other way. Ionescu and Laney may spearhead the offense, but Whitcomb’s contributions are vital if the Liberty want to get back into the playoffs.

It could be that the Chicago Sky may hold the secret sauce to stifling Sabrina, or it could be that New York brings out the flair for dramatics in the third-year superstar. Whatever the reason, it’s clear that Ionescu has a sixth sense for when her team needs her the most. It didn’t start well for Ionescu, who missed her first few shots, which immediately sparked concerns about going five consecutive quarters without registering a field goal. However, once she knocked down a push shot while drawing a foul at the 4:25 mark of the opening quarter, a switch was flipped and she was spectacular. While her game-tying three will dominate highlights, it was an early stretch in the fourth quarter that was most impressive. With the Liberty down ten points, Ionescu scored the team’s first five points before assisting on the next three baskets.

It wasn’t quite the classic 2021 Laney performance the New York Liberty needed, but it was pretty close. Like Ionescu, Laney struggled to find a rhythm despite knocking down an early corner three. The All-Star also grappled with knocking down point-blank layups and push shots she normally hits even when heavily contested. It wasn’t until overtime did Laney finally began to look special. On one possession, she attacked the rim with force that left defenders helpless. This later opened up Laney’s patented mid-range jumper and it was easy to see the confidence radiating from her.

While her stat line of two points on two free throws won’t jump out at anyone, the return of DiDi Richards proved how important she is to the Liberty’s success. In her mere four minutes of playing time, Richards forced a travel, poked several balls loose, and drew a foul attacking the rim. These individual plays were massive for a team that struggled to get stops and went through disastrous scoring droughts in the prior game. Unfortunately, Richards reaggravated her hamstring injury—she was ruled out midway through last night’s contest and could miss additional time—but her willingness to do the little things is invaluable. If she can steadily improve her jumper, then she’ll be a fun option off the bench all year.

#5 – Figuring Out the Rotation

Though it’s obvious that the top of the Liberty hierarchy is the duo of Ionescu and Laney with Whitcomb as an auxiliary option, it’s still unclear what the rest of the rotation looks like. Natasha Howard seems to be the answer in regards to volume (14 shots per game), but she has struggled with efficiency. Newcomer Stefanie Dolson saw a dramatic uptick in her usage last night and was steady, sealing deep on several occasions that led to easy baskets. Jocelyn Willoughby and Michaela Onyenwere are intriguing options but require the ball to find them rather than being trigger options. With Rebecca Allen’s return on the horizon, it’ll be fascinating to see what this team slowly evolves into.

1 – Trio of Danielle Robinson, Kelsey Mitchell, and Victoria Vivians (the Fever rookies are fun, but these multi-year veterans were spectacular)

2 – NaLyssa Smith (The second overall pick notched her second career double-double, she’s going to be a problem for years to come)

3 – Sabrina Ionescu (Great bounceback performance, the team will be in every game when she’s playing like this )

For a third straight game, the Liberty have struggled with slow starts. The redeeming part about last night was that the Liberty’s offense quickly came to life, with Dolson scoring inside at the 8:19 mark. Unfortunately, the team’s defense looked rough again, giving up five straight baskets to the Fever. Things were obviously cleaned up over the course of the game, but the Liberty can’t afford to keep overcoming early deficits, especially with the lineup still looking to get healthy and whole.