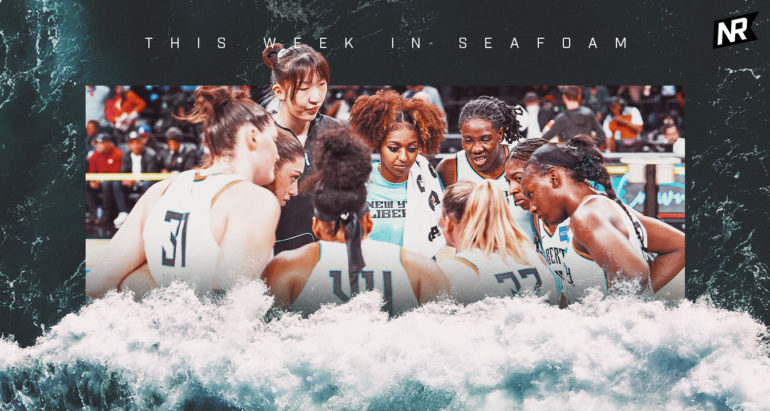 This was not a good week for the New York Liberty.

After opening the season with a win over the Connecticut Sun, it looked like the Liberty were set to build on last season’s playoff run. But the next three games were a reminder that, yes, the Liberty made the playoffs in 2021, but they did so with a 12-20 record and, per Basketball Reference, a Pythagorean expected record of 7-25. This team was a long way off from competing for a title. And four games in, it looks like they’re still a long way off.

New York played the Sky on Wednesday. No one should have been surprised that the Liberty lost to the defending champions, but the way in which the team lost was not inspiring, falling 83-50.

The next two losses were competitive, but they were to teams that you would think New York could beat. Instead, the team lost 92-86 in overtime to a Fever team that’s almost half rookies, then 81-71 to a Wings team that still doesn’t have Satou Sabally.

In this week’s This Week in Seafoam, we’re going to look at two things. First: what the numbers say about why New York is struggling and second, a look at this week’s bright spot: Han Xu.

It’s early. This is all very “small sample size.” But let’s just compare some team stats for New York.

The problem seems to come when we focus in more on things that happen up front.

Against the Wings, for example, the Liberty allowed Dallas to score 14 second chance points, while earning just six themselves. The difference was 17-4 against Indiana. It was only 5-2 against the Sky, but Chicago won that game by 33 and was scoring on their first chances.

New York’s frontcourt has been an issue. Natasha Howard is shooting just 29.6 percent from the floor so far (with a one-of-15 performance in the overtime loss against the Fever weighing heavily). While her stocks (steals and blocks) are still there as always, the Liberty need her to be a consistent offensive threat. Stefanie Dolson, at 50 percent, is shooting better, but is taking only six shots per game, with averages of 6.5 points and just 3.0 rebounds. Your starting center has to rebound better than that. She has just one more total rebound than Sami Whitcomb and Jocelyn Willoughby.

Digging into some Synergy numbers, the Liberty offense has really struggled in transition, with its 0.816 points per possession in transition ranking 11th in the league. New York needs another ball-handler, especially because while Sabrina Ionescu is such a good player in the halfcourt, her lack of speed does make it a struggle in the open court sometimes. She’s generating just 0.625 points per possession in transition as opposed to 1.128 PPP in the half court, which ranks in the 93rd percentile.

Defensively, Synergy shows that the team is struggling to defend the pick-and-roll, ranking 11th against that playtype. The team has also struggled to defend in transition.

Overall, struggles on both ends of the floor—driven by some limitations with this roster and some unexpected struggles from Natasha Howard—have the team struggling.

The Upside Of Han Xu

If there was one good thing this week for the Liberty, it was Han Xu.

The theory of Han is simple: she’s very tall and she shoots well. Having a 6-9 center who can stretch out to the perimeter could be a huge mismatch in this league. But the first time Han was in the W, she was a 19-year-old who just didn’t have the strength to play the five in this league.

But what a difference a few years make.

Han has only played in two of New York’s four games, but she scored 10 points in each and ended up playing 15 minutes against Dallas, going four-of-seven from the floor and one-for-two from three with two rebounds, two assists, two steals and one block. Han was everywhere. She was a +1 in the game, making her the only Liberty player with a positive plus/minus. And while we shouldn’t make too much of a single game plus/minus, I think it’s still worth noting that New York definitely looked like a better team with her on the floor instead of Dolson.

On this play, we see Han making a three. I love the play design here. You have Sami Whitcomb with the ball at the top of the arc, where she gets a screen from Michaela Onyenwere. That leads to a switch with Awak Kuier on Whitcomb. That’s a win for New York, and Dallas has to focus some energy on preventing a Whitcomb drive. That ends up leading to Han, who has been hanging out on the wing, getting a little space between her and her nearest defender. Whitcomb swings the ball over to her and she knocks down the three.

Here’s an example of Han’s height making her really hard to deal with. Sabrina Ionescu fires this pass down the floor to Betnijah Laney, who receives it on the wing and heads down the baseline. But Dallas sends multiple defenders at her, cutting off her path to the hoop.

But there’s Han! She sprints up the floor and gets into the paint. Laney throws a lobbing pass up to her, and because she’s so tall, she’s able to grab the pass even though it looked a little high. From there, it’s easy for Han to lay the ball in.

Defensively, Han still has a bit to go before she can make the best use of her size. If someone drives in on her, she can stand there and just make things really difficult:

She has some really good instincts and ended up with a couple steals against Dallas because of those instincts:

Han is defending Awak Kuier, who goes up to set a ball screen for Allisha Gray. But with the Liberty not really viewing Kuier as a threat here, Han comes in on the double of Gray, who has nowhere to go. Han gets a hand in and juggles the ball away.

I still want to see more consistency when defending in space and the finishing at the basket isn’t quite where it should eventually be, but there are some serious reasons for optimism with Han Xu.

Next Week In Seafoam

There’s just one game on the docket this upcoming week for the Liberty, as they’ll face the Sun on Tuesday.

New York beat Connecticut already, but this will be a different Sun team. Courtney Williams will be back from suspension. DeWanna Bonner should be suiting up after returning from her overseas commitments.

For the Liberty to get another win, they’ll have to figure out how to deal with the Sun’s uber-sized lineup.

Per Positive Residual, the Sun have played Brionna Jones, Jonquel Jones and Alyssa Thomas together for 44 minutes, with that lineup having a net rating of 6.2. That’s lower than the team’s overall net rating of 9.3, but the fact that Connecticut can survive playing what’s essentially a lineup with a five, a stretch five, and a four is bad news for a team like New York, which doesn’t have the size to really match up with that. Are you throwing Jocelyn Willoughby at Alyssa Thomas? Yikes.

If New York has hope, it’s that the Sun will go too big. If they play those three plus Bonner at the two, that’s some really poor spacing. If the Liberty offense could get hot, it could take advantage of those minutes.

Still, the likeliest scenario is that the Liberty are looking at a 1-4 start. But on the bright side, the next game after that is against the winless Lynx, so it’s possible that things will get better soon.