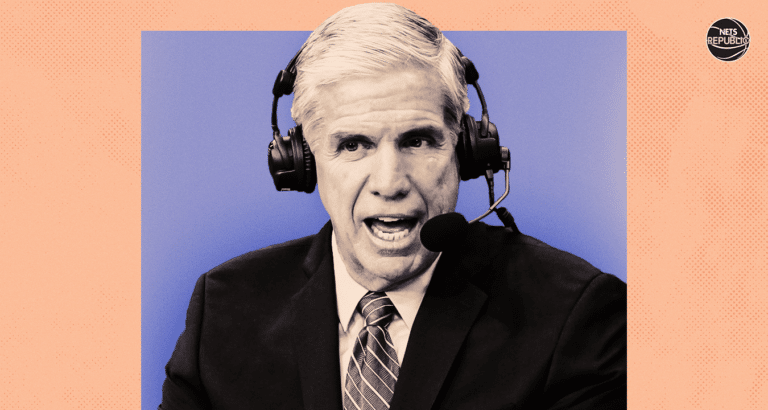 This past week, Nets fans heard that Jim Spanarkel won’t be returning to the booth or studio this upcoming season. Originally reported by the NY Post, the YES Network cut Spanarkel from its payroll by way of COVID-19 related cost-cutting measures, ending over three decades of radio and television work “the Senator” logged covering the team. Ask any Nets fan you know, and you’ll find they were undoubtedly disappointed by the news.

First putting aside how well Spanarkel has done his job over the years, the timing feels all sorts of cruel. The upcoming 2021 season is the one for Brooklyn fans, and has been since Woj dropped the illustrious “clean sweep” bomb nearly a year and a half ago. It’s the most anticipated season in team history, far and away. This is uncharted territory for a Nets organization that has been a stepchild of the NBA for much of their existence. More eyes and ears will be trained on this team, relative to the franchise norm, than perhaps any other in league history. And that Jim Spanarkel won’t be there to see it through feels wrong.

His role in the Nets experience over the past three decades cannot be understated. New York and Jersey professional basketball has seen some truly pitiful teams occupy that space over not-so-recent history. But the saving grace for both the Knicks and Nets in the 21st century has been their broadcast teams. For as untouchable a duo as Mike Breen and Clyde Frazier may seem over at MSG, YES Network matched it. Perhaps exceeded it. As a young basketball fan, you can’t have much better formative experiences watching your team than when it’s narrated by Ian Eagle and Jim Spanarkel. Even if Sundiata Gaines is running point.

Far too much of Spanarkel’s career was spent calling lopsided contests in a barren IZOD or Prudential Center. But he did everything in his power to make those games enjoyable and informative for any viewer. His love, as well as his knowledge, for basketball was infectious. And there was no homer-ism when you turned on YES Network. Some of Eagle and Spanarkel’s best moments came calling the opposing team’s highlights. This Kobe poster on Brooklyn in 2013 is an all-timer; how often does the NBA upload poster dunks using the broadcast of the posterizee?

Nothing against Richard Jeffrson and Sarah Kustok, but the last handful of years has been rough on the YES broadcasting team. Ian Eagle is still the most enjoyable play-by-play man in the league. But Spanarkel was slowly phased into a studio role, and is now out entirely. Mike Fratello, Czar of the Telestrator, is working out west for the Clippers these days. For a Nets fan who really fell in love with basketball towards the tail end of the Kidd-Carter-Jefferson Big 3 Era, those three commentators were as important to me as any player over the following years. Apologies to Devin Harris and Johan Petro.

Zach Lowe summed up the viewing experience each and every year in his annual League Pass Watchability rankings, where he consistently recognized the YES broadcast team as the best in the league. Spanarkel & co., nearly alone, made games worth watching. In his 2016 rankings, Lowe admitted he “manipulated the rankings to shove the Nets into dead last. An annual perfect 10 in the League Pass Minutia category has spared Brooklyn the ignominy of the cellar too many times.”

The best decision anyone made in the Nets’ transition to Brooklyn was keeping the broadcast team intact. The home-run trades for Gerald Wallace and those washed Boston veterans were catastrophes. A refusal to acknowledge their New Jersey history until, really, this year, rubbed many fans the wrong way. But Jim Spanarkel did all he could to bridge the gap between eras. His passion and insights into the game never wavered. Any real play worth celebrating was capped with an “OHHHH” or a hearty laugh from the Senator. And unlike too many players-turned-commentators, he never bogged the broadcast down with stories from his past career. But the ones he did tell always felt natural, and timely.

Brooklyn is transitioning into a new era, once again. One filled with hope and excitement, the likes of which are unprecedented in franchise history. Two of the most entertaining talents the game has ever seen are going to be sharing the rock, led by one of the more fascinating coaching hires in memory. Not having Jim Spanarkel there to break it down for Nets fans is truly inconceivable. The team just unveiled Classic Edition jerseys that call back to the early 90’s. It’s criminal we won’t get to hear any Drazen Petrovic or Kenny Anderson stories from the man who has more to say about that era of Nets basketball than anybody else recently involved with the team. Jim Spanarkel has seen nearly all there is to see during the Nets’ decades-long climb to national relevancy. It’s a shame he won’t get to enjoy the view from the top.