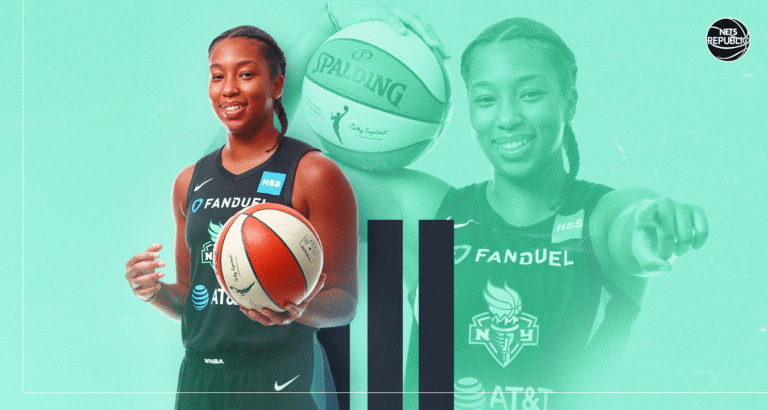 Walker’s debut was marred by factors beyond her control, but there are still reasons for hype behind the New York Liberty early entrant.

A University of Connecticut alumna on a WNBA roster…it’s a story you’ve heard countless times, no? Megan Walker, however, put her own unique twist on the concept upon her WNBA entry.

Walker, who turns 21 on Monday, was an early entry into the 2020 WNBA Draft and was the highest underclassman in the most recent selection proceedings last spring. She was taken ninth overall by the New York Liberty, who used one of the picks obtained in the Tina Charles trade. The former Husky declared her eligibility shortly after the team’s latest NCAA Tournament endeavor was called off due to the ongoing health crisis.

Walker had a tough go at it in the Bradenton bubble. She arrived late after testing positive for COVID-19 prior to the season’s opening and wound up averaging just 3.3 points and 1.5 rebounds over 18 games. However, many in the organization believe she can live up to the hype that followed her from Storrs.

“What she brings from that UConn offense is that ability to cut (at small forward),” veteran Layshia Clarendon said of Walker shortly after her arrival. “I think that she’s going to bring awareness to that position… she’s going to be a bright spot for this team.”

“She looks good. She’s shooting the ball really well,” Walker’s Bradenton roommate and fellow rookie Jazmine Jones declared. “Having her on the court for us is definitely going to be great.”

Her Early Entry Made History

Only three members of the vaunted Connecticut program have opted for an early entry into the WNBA, the others being Morgan Tuck and Azura Stevens. Of that trio, Walker was the only one who entered with only three years of college experience; Tuck had a year of eligibility left due to an injury, while Stevens had an extra season after a transfer.

A breakout junior campaign, however, was enough to convince Walker she was ready for the next level. She posted averages of 19.7 points and 8.4 rebounds, earning the AAC’s Player of the Year Award previously won by Breanna Stewart, Napheesa Collier, and Katie Lou Samuelsson.

“When you have an opportunity to reach a certain goal that you set for yourself, I think it’s important that you have an opportunity to take it,” Auriemma said of Walker’s choice, per Mechelle Voepel of ESPN.com. “Meg’s decided this is the right time for her to take advantage of this opportunity. Obviously, she had an incredible season this year and is incredibly talented. We support her 100 percent, and we’re going to support her going forward.”

Walker’s Huskies failed to bring home yet another national title to the Constitution State, but she spent some time bringing back titles on an international level. Alongside fellow future draftees like Ruthy Hebard, Chennedy Carter, and Lauren Cox, Walker helped guide Team USA to a gold medal in the 2016 FIBA Americas U18 Championship in Chile. She put up 12 points in the championship finale against Canada and also earned a silver medal in the 3-on-3 edition of the tournament in that same year. Another silver came during the 2017 FIBA U19 World Cup, a quest embarked upon with future Liberty teammate Joyner Holmes.

Earlier this year, Walker held her own when the modern Team USA superstars went up to Hartford to battle the Huskies in a January exhibition. She tallied 22 points and seven boards in UConn’s strong effort against the Americans.

“(UConn has) some players we’re going to see at the next level,” USA coach Cheryl Reeve said. “Megan Walker’s going to be a great pro.”

She Would Be Involved in Physical Therapy if Not for Basketball

Walker has established herself as not only a prescient presence on the hardwood, but one in the classroom as well. She partook in a physical therapy program at Monacan High School in her native Virginia prior to making her debut in Storrs, all while leading the local Chiefs to an undefeated record in her senior year.

In an interview with ESPN’s Walter Villa during her high school days, Walker mentioned that while she’d love to work for the FBI (following in the footsteps of her uncle, who also works in law enforcement); partaking in athletes’ medical endeavors would also be a strong career if she weren’t shooting hoops.

Her prowess both on the court and in the classroom was noted when she was awarded the Gatorade National Girls Basketball Player of the Year during his aforementioned senior stretch in 2017. WNBA All-Star Elena Delle Donne presented Walker with the honor.

“Megan is an excellent student-athlete who has earned recognition as the nation’s best high school girls basketball player while also excelling in the classroom and making a difference in her community,” said Gatorade Senior Vice President and General Manager Brett O’Brien in a statement commemorating the award. “Megan’s statistics on the court speak for themselves, but even more impressive is the example she sets for younger student-athletes and the impact she has had on her teammates. Megan represents everything we look to celebrate in a Gatorade Player of the Year recipient.”