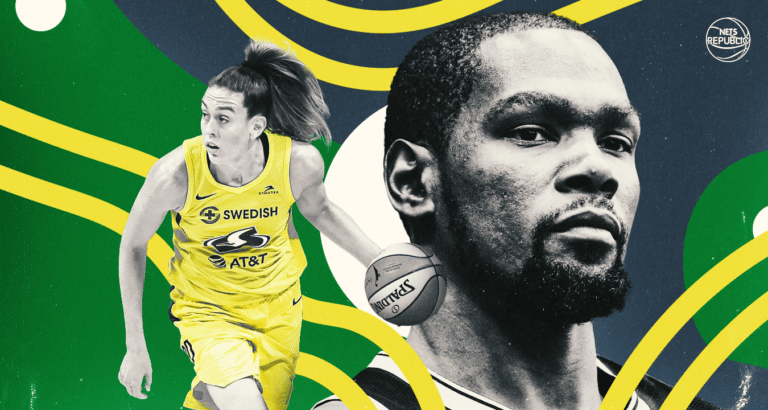 Kevin Durant will play for the Brooklyn Nets later this month. Let that sink in for a second. A perennial MVP candidate will be suiting up for the home team in Barclays Center. This franchise has come a long way in the past six years. Nothing should dull Nets fans’ excitement about KD. But questions about his recovery from rupturing his Achilles’ tendon in the 2019 NBA Finals are throwing a bit of cold water on Brooklyn.

The fear is understandable. Achilles’ ruptures have stunted the careers of many great basketball players. Kobe Bryant, DeMarcus Cousins and Elton Brand were never the same after their Achilles’ injury. But none of these NBA players provide the best data point on what Kevin Durant will potentially look like in 2020-21. The best comparison to KD is his friend and WNBA superstar Breanna Stewart, who suffered a ruptured Achilles’ tendon just three months before Durant did. If you’re nervous about Durant’s return, let me explain why watching Stewart will make you feel better.

Many NBA fans don’t watch the WNBA, or even outright dismiss it. Not only does that mean not watching tremendous basketball but also they are missing out on a great comparison to Kevin Durant. No basketball superstar more closely resembles KD than Breanna Stewart (or Stewie) does. In fact, Stewart has modeled her game after Durant’s and wears his shoes. The pair have been friends for years and leaned on each other during their rehabs.

“KD and I, we’ve talked a lot throughout this process,” Stewart told the Hartford Courant in January. “Especially when it happened, we’re the only two in the world who went through the same exact thing, being in the same kind of position in the basketball world. … It’s nice to have someone else there because if you haven’t gone through it, and you’re not going through it right now, you can’t relate to it.”

Stewie and KD share a similar frame: tall and skinny with seemingly never-ending arms. Offensively, both are deadly shooters and drivers with ball handling skills to create for themselves and others. They can kill you off catch-and-shoot opportunities with even a tiny amount of space or step into threes off transition.

Defensively, they both use their long arms to rack up blocks. Stewart has to deal with burly centers more often than Durant does in his typical power forward spot, so more of Stewie’s blocks come on-ball. But both of them love playing “free safety” and rotating over for blocks. Stewie and KD also share the gift of quick hands, and get more steals than you’d expect from players of their size.

How Breanna Stewart fared after her Achilles rupture

After missing the entire 2019 season, all Stewart did in 2020 was finish second in MVP voting, lead her team to a championship and win Finals MVP. Brooklyn would be ecstatic with those results. Most importantly, Stewart didn’t look any different from 2018 when she won league MVP and Finals MVP. Brady Klopfer did a good job of collecting clips of Stewart in this SBNation article, but you can watch any video of her play in 2020 without seeing a trace of an injury.

However, Stewart’s stats show a slight dip in production and efficiency during the regular season. Her points per game fell by nearly two points, her effective field goal percentage dipped substantially (58.9% in 2018 to 51% in 2020) and her turnover percentage jumped by 3.6%. Obviously, Stewart still played at a very high level and improved in key areas like free throw rate, steal percentage and block percentage. While Stewart attracted more attention than ever before and played a slightly different role in 2020, the time off due to the injury certainly played a factor in her regular season numbers. Her teammate and WNBA legend Sue Bird, who also sat out 2019 with an injury, explained why coming back is so hard.

“I’ve missed seasons before, and I’m telling you when you don’t play in the WNBA for close to two years, it’s a shock to the system. I’ve experienced it,” said Bird before the season. “I’m fully aware of that, so I know what to expect. It doesn’t mean I’m necessarily going to be prepared for it.”

By the playoffs, Stewie was fully herself and started mowing down the competition. The Storm swept both the three-seed Minnesota Lynx and the top-seed Las Vegas Aces. After a two-point victory in Seattle’s first playoff game, the team won every subsequent game by double digits. Stewie was electric, and her masterpiece came in Game 1 of the Finals. She put up 37 points, 15 rebounds and 4 blocks against the only team to beat Seattle twice in the regular season.

Stewart increased all of her counting stats from her 2018 playoff performance. Stewart also increased her efficiency from 1.03 points per play in 2018 to 1.23 ppp in 2020 as her turnover rate plummeted from 9.4% to 5.4%. She also put up the second-best player efficiency rating (35.0) in WNBA playoff history among players who played at least 100 minutes.

What to expect from KD based on Stewie’s success

Breanna Stewart’s 2020 season should give hope to any athlete after an injury, especially a player with similar features like Kevin Durant. But there are reasons to discount her success in relation to KD’s return. Durant is six years older than Stewart, which could mean the injury’s effects will linger longer. Also, explosiveness is more important in the NBA than in the WNBA. Stewart didn’t seem to lose any bounce, but any drop in explosiveness will be more apparent in KD’s situation. Stewart also had a much stronger supporting cast than Durant. The Nets have a tremendous point guard in Kyrie Irving and great role players like Joe Harris. But, they simply don’t stack up to the Storm’s team with a legendary point guard (Sue Bird), multiple Defensive Player of the Year candidates (Alysha Clark and Natasha Howard) and one of the greatest scorers in basketball right now (Jewell Loyd).

The similarities outweigh the differences, though. These two players look the same on the court and play similar roles for their teams. Fans can be confident that Durant replicated Stewart’s rehab effort because he is also one of the best players in basketball and they talked about a newfound appreciation of basketball during their rehabs.

It’s fair to expect that Durant is, at least, where Stewart was before the WNBA season. Based on these reasonable assumptions, Durant will likely show a slight dip in his offensive production at the beginning of the season as Stewart did. As he knocks off the rust on that end, fans can expect KD to be locked in defensively. By the playoffs, Durant will hopefully be where Stewart was and be back atop the basketball world.