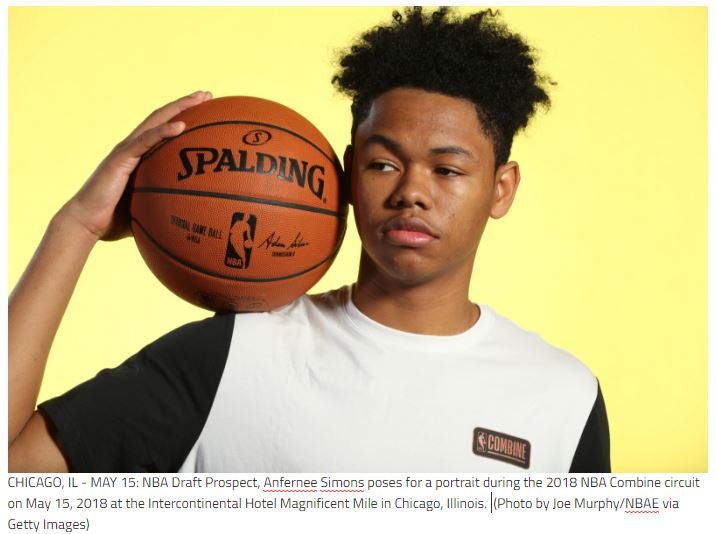 Using a loophole in the draft process, Anfernee Simons skipped college to enter the field this year. He has more question marks than anyone coming into the League, here’s why.

Anfernee Simons is somewhat of a throwback prospect. Not necessarily in terms of his game, rather the way he’s entering the League. He’s a skinny small guard with electric athleticism, irrational confidence, and  major questions around his ability to transition from the high school game to the NBA. In other words, Simons is the exact type of prospect the NBA tried to eradicate from the draft through the infamous one-and-done rule. Are the concerns about him warranted? Is the NBA’s fear about his transition real? Let’s find out:

If not for his bouncy athleticism, Simons arguably would have been un-draftable for the vast majority of teams. After all, he was in high school less than a year ago and he needs significant work in nearly every aspect of the game. Thankfully, he has athleticism in droves.

Just go on YouTube and look up “Anfernee Simons” and you’ll see pages upon pages filled with videos like this one:

And sure, YouTube mixtapes distort player evaluations and can make any player look like an elite athlete, but Simons is different.

Simons uses a combination of elite quickness and lightning fast change-of-direction ability to get anywhere he wants to on the court. While his tools surely come in handy on offense, it’s on defense where his real potential comes through. He has the athleticism and length necessary to become a plus defender in the NBA one day–even if he’ll likely make Isaiah Thomas’ numbers look like HOF-level for his first few years in the league.

Behind his athleticism, Simons’ potential scoring ability is his biggest selling point. He has a way-ahead-of-the-curve handle that he can use to get to the rim, and a variety of creative finishes to deploy when he gets there. Furthermore, he has a smooth jumper that–though in need of minor mechanical tweaks–should work at some level in the NBA.

Through high school, he flashed a smooth pull-up jumper with a quick release that he could pull out at any time and surprise the defense. He’s far from consistent as a scorer and is prone to wild fluctuations in efficiency with his shot, but he has the potential to be a serious scorer in the NBA.

For all of his potential though, he’s still basically a high schooler. His body is woefully behind where it needs to be for him to become anything more than a project, and he’ll need significant time in the weight room to survive in the NBA. Official measurements list him at 183 lbs, but when you look at him it wouldn’t surprise you if he was close to 163.

Granted, he has oodles of time to grow into his body–he’s just 18 years old–and he certainly won’t stay this weight forever. But the chance he’s an even usable player in his first two to three years is thin.

Because of his small frame, he’s going to struggle with consistency for awhile. His shot, while promising, is still too low for NBA defenses and he’s going to find driving to the rim to be a treacherous endeavor. There are small guards who’ve succeeded in the NBA, but many of those guys–think Steph Curry and Isaiah Thomas–are built. They might be short, but they’re strong enough to hang with the rigors of the NBA.

At this point, it’s too soon to think of a reasonable comp for Simons. We just don’t have any idea of what type of player he’s going to develop into. He could be a sixth-man superhero as the Ringer’s Kevin O’Connor says in The Ringer Draft Guide. Or he could develop into a defensive stopper in the mold of a Patrick Beverley.

It’s way too early in his development process to figure out models for his game.

Simons’ fit with the Nets revolves less around his game and more around his potential. The Nets are building a track record of gambling on project players and banking on their internal development staff, so Simons should surely be on their radar. With a few years of development and NBA-level training, the Nets could potentially have a steal.

His role on the team wouldn’t quite be clear, but he has enough potential that the team should take a shot on him.