Gotham FC lost at Audi Field on Saturday night, conceding two second-half goals to the Washington Spirit. Their losing streak is now at 10, having not won a game since the 8th of July away at Racing Louisville.

A Defensive First Half

The team displayed a great defensive performance in the first half. Goalkeeper Michelle Betos recorded a great kick save in the 15th minute, stopping an Ashley Sanchez who was in on goal. In first-half stoppage time, Betos came off her line to stop last year’s Rookie of the Year Trinity Rodman, who got past two Gotham defenders. Rodman looked to put the ball past the Gotham keeper, but Betos put her foot on the ball and cleared it.

Defenders Imani Dorsey and Estelle Johnson also came up big in the first half for Gotham. Dorsey stopped Rodman from sending in a cross on the right side by blocking it in the 17th minute. She would do it against Rodman again in the 32nd minute, blocking her shot inside the box.

Johnson made some game-saving tackles to disrupt the Spirit’s play. In the 43rd minute, she stopped Anna Heilferty, who tried to send a pass into the box, with a tackle. Just a minute later, she would stop another Spirit player, this time Sanchez, who tried to dribble past her but she put her foot on the ball, causing Sanchez to fall down then passed the ball off to her teammate.

Still No Bite in Attack

Gotham FC on the attack was a different story. In one of the few chances Gotham created on Saturday, Ifeoma Onumonu received a pass on the left side, running down into the box with the ball, but was caught offside. In the 6th minute, Taylor Smith linked up with Paige Monaghan for a 1-2 pass, but Monaghan was also caught offside.

Gotham got their first true chance in the 8th minute. Kristie Mewis sent a great through ball to Onumonu, who made a run towards the final third. Onumonu almost lost the ball to a Spirit defender but was able to recover the ball, taking a shot which went straight into the hands of Spirit goalkeeper Aubrey Kingsbury.

Gotham got another promising attacking opportunity in the 27th minute, Smith sent a pass to Monaghan on the right side, making a great run into the final third and took a shot with her right foot but the ball hit the side netting. It felt like the team was getting closer and closer to scoring a goal.

Their best chance in the first half would come in the 30th minute. Gotham worked the ball through their half before Nahomi Kawasumi sent a ball to Monaghan on the right, running past three Spirit defenders before crossing the ball into the box and finding Onumonu, who slid in the box and just missed the ball.

The Spirit continued knocking on Gotham’s door in the second half. In the 49th minute, Sanchez broke away from the Gotham FC defense and made a run into the final third, but Dorsey once again came up big with her third block of the night.

Gotham would concede their first goal in the 50th minute, after Sanchez sent a pass to Tara McKeown, who originally tried to pass the ball inside the box to a teammate, but it was blocked by Ali Krieger. McKeown then got the rebound and put the ball through Krieger’s legs, scoring for the Spirit.

In the 59th minute, Gotham earned a corner kick and played it short. Victoria Pickett played it to Kawasumi, who passed the ball to Monaghan inside the box before giving it to Mewis. Mewis then made a run into the box and got a touch on the ball but it was blocked by Kingsbury.

Gotham kept trying to create their opportunities but had trouble timing their runs. They were called offside six times during the match. Their final change of the night came in the 77th minute. A great buildup in the midfield led to a pass on the right wing, where Margaret Purce ran down and crossed the ball into the box. It was blocked by Kingsbury, but the ball ended up in front of Monaghan, who tried to head the ball. However, she couldn’t get any power behind her header as the ball was too low for her to head it. The ball was brought down to the floor and taken away by a Spirit defender.

The Spirit would seal the game for good after a huge goalkeeping error. Sanchez took the ball away from the Gotham keeper after a poor first touch and tapped the ball into the back of the net to score the team’s second and final goal.

What’s Next for Gotham FC?

Gotham FC have three games left remaining in the season. The team is out of playoff contention but that does not mean their season is over yet. In the postgame press conference, Johnson said the team still wants to end the season strong, saying with a smile, “We want to play spoiler.”

The last three teams Gotham will face are OL Reign, North Carolina Courage, and Portland Thorns, all of which are in the playoff race. “The teams we are playing against [are] teams that are pretty high up on the table,” said Johnson. “Not sure how much we can do to spoil their playoff contention but we surely can do our best to end off with a bang.”

What Gotham needs to do in their last three games of the season is score goals. The team has been struggling to convert their chances into goals throughout the entire season. Pickett made note of this in her post-game remarks, saying, “We need to finish in the final third a little bit more, we need to find the net and need to do a better job at scoring.”

Gotham’s next game will be on Wednesday, September 21st versus OL Reign on Latinx Night. For more information, click here. 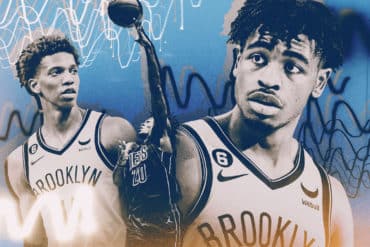 The Nets Young Players Are Stuck in Limbo