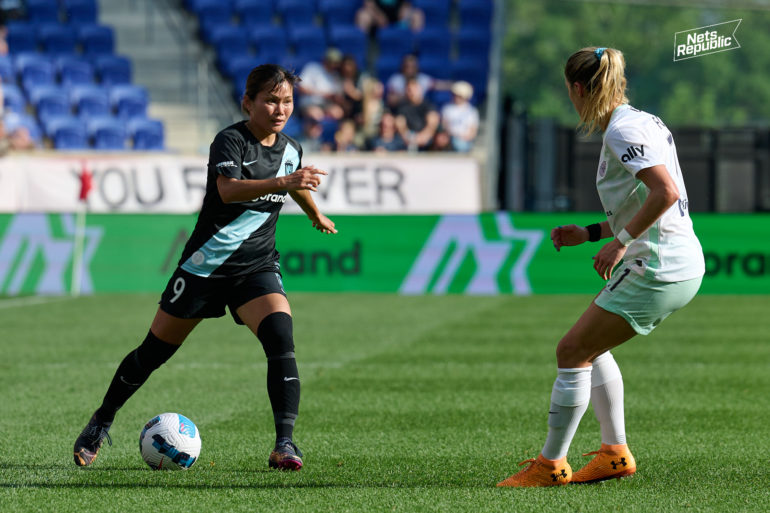 The NJ/NY side’s performance was by no means dominant—tallying nine shots to Racing’s 23—but it was incredibly gritty. In the first 20 minutes, Gotham were pinned back in their defensive third and forced to defend a flurry of chances from Louisville, including a cracker of a free kick from Emina Ekic that Ashlyn Harris managed to save. But Gotham managed the game well, absorbing pressure and playing on the counter attack. When their chances came, Gotham capitalized—and that was the difference between the two sides Friday.

“That felt like a proper NWSL game,” head coach Scott Parkinson said of the rollercoaster nature of the match. “I’m really proud of the team. They just don’t stop wanting to be better and pushing us as a staff to be better.”

Against the run of play, Gotham opened the scoring in the 25th minute with a Paige Monaghan belter. The move started with Delanie Sheehan winning the ball in Gotham’s end and playing it into space. Monaghan was then able to run onto the ball, taking one touch to settle it on her right foot before unleashing a beauty of a shot into the far post corner of the net.

The goal marked Monaghan’s first of the season, and it effectively changed the dynamic of the game for Gotham as they were subsequently able to settle into the match.

The backline weren’t truly troubled again until Louisville equalized in the 67th minute. Racing midfielder Savannah DeMelo took advantage of a miscued pass out of the back from Mandy Freeman, and then beat Ali Krieger to slot the ball into the bottom corner of Gotham’s net.

From there it seemed as though Gotham would once again fall short of victory. But as play approached the 80th minute, a mistake from a Louisville center back proved to be decisive. Nahomi Kawasumi cut out a misplaced pass from Gemma Bonner, and started driving the ball toward Racing’s 18. Drawing defenders as she made her run, Kawasumi then laid it off to an open Smith who coolly placed her shot upper 90, giving Katie Lund no chance to make the save.

“She is a special little player,” Parkinson said of Smith, who the club picked up from the waiver wire just two weeks ago. “She’s given us so much energy. It’s so great to have her here.”

And after just her second appearance for Gotham, the Smith acquisition is looking more and more like a shrewd signing. Smith adds experience to a forward line that, for all their collective talent, has been cold in front of goal this season. And with international players likely away for the remainder of July, Smith could be the team’s key to taking points away in their next two matches.

“I think Taylor has come here and just shown what an incredible player she is. Her first step is unbelievable. She has so much tenacity and bite, but also such technical ability and sees the field so well,” Monaghan said of her new teammate following the game. “Yeah, she’s unbelievable and this is just the first of many for her.”

It will be interesting to see how Parkinson incorporates Smith once Ifeoma Onumonu and Margaret Purce—both being perennial starters in the Gotham XI—return from international duty. But, if given the minutes, it’s not hard to imagine Smith enjoying a rise similar to Onumonu’s last season. Like Onumonu before she settled at Gotham, Smith has been a player who’s bounced around from team to team, looking for a long-term home and a defined role.

“I’ve been here for maybe a week and a half and everybody has been so welcoming,” Smith said following the match. “They’ve given me all the tools to be successful.”

Next Saturday, Gotham will travel to Providence Park to take on the Portland Thorns. With one of the deepest rosters in the league, the Thorns will still be a dangerous and challenging side without some of their star attacking players on international duty.

For Gotham, it will be a chance to build on Friday’s win. And though results have been hard to come by, Monaghan said the team has a longview perspective on their season.

“I think sometimes outsiders don’t understand that this is a grind. I think our team understands that we don’t want to be our best in the beginning of the season. We want to be at our best towards the end of the season,” said Monaghan. “We’re just focusing on getting better every single day—and yeah, consistency is key, of course, but we are building the pieces that we need in order to be the team that we want to be in October.”