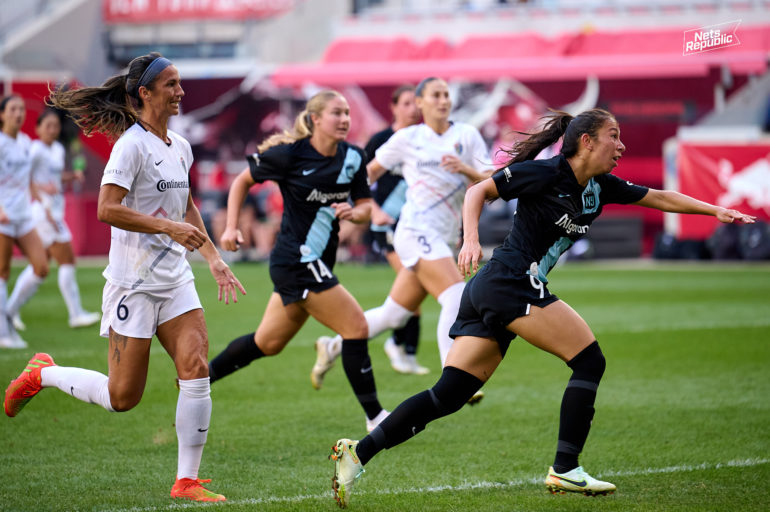 On a damp and dreary night at Red Bull Arena, Gotham FC dropped their ninth consecutive game in a 0-1 loss to the Kansas City Current — ending another matchweek at the bottom of the NWSL table.

It was a similar story to the most recent matches Gotham have played under interim coach Hue Menzies: the team played well enough to get a result only to lose the match on a momentary mental lapse. This time the error came from second-half substitute Ellie Jean, who made a clumsy challenge in the box, leading to a Kansas City penalty.

Following the match, Gotham midfielder Kristie Mewis said the mood in the locker room was not so much discouraged, but frustrated, as the team knew they held their own against the current league leaders.

“I definitely don’t think that they outplayed us by any means. I just don’t just think we have that final piece right now. And that’s obviously, to score goals and just somehow grind out wins,” said Mewis. “Teams aren’t really breaking us down, so it’s just our final piece. And I think that’s the most frustrating part. We can’t let these teams just beat us when they’re not out playing us.”

In truth, not much separated the teams until the decisive penalty. The possession was fairly even, with Gotham edging out KC with 52% of the ball by the end of the match. Gotham had 14 shots with just three on target. Kansas City managed 13 shots with 6 on target. You could say, however, that the Current looked more dangerous coming forward as they took more of their shots from inside the box and caused Gotham defenders to scramble to clear their lines.

Michelle Betos came up big in the first half to keep the scoreline at nil-nil. The keeper came off her line and stopped a chance from KC’s Kristen Hamilton, who had found space in behind was attempting to chip the ball over Betos.

The scoreline stayed even until the 77th minute when Jean brought down a Current player in the box, leading to the game-deciding penalty converted by Hailie Mace.

Minutes later, Mewis forced KC’s AD Franch to make a big save, pushing the ball that had been heading into the upper corner onto the crossbar. Gotham couldn’t manage anything more dangerous or decisive, leading to another match ending in defeat.

A New Setup for Gotham FC

Since taking charge, Menzies has shown a willingness to experiment with the personnel selected for his starting XI and the way they set up for the match. He’s showcased this in the last several games by playing Ali Krieger as a defensive midfielder — a position that has remained a headache for the side with Allie Long on maternity leave for the season. On Sunday, Menzies put out a 3-5-2 formation with Krieger slotted in as a third centerback alongside Estelle Johnson and Mandy Freeman, and Paige Monaghan and Taylor Smith serving as wingbacks.

Defensively, the new formation was effective (for most of the match). Gotham was less vulnerable at the back with the extra support. But, if Menzies plans to use this formation going forward, a few adjustments may need to be made in order for his side to start scoring goals.

Monaghan and Smith looked dangerous at times when they were able to push up into the attack, but too often the wingbacks were not high enough up the pitch when Ifeoma Onumonu received the ball in the Current’s end, leaving her with limited options. If Gotham plays this system in their remaining games, the pair may get a better sense of when they can gamble to go forward and when they should be more conservative.

Ideally, Margaret Purce would have played as Onumonu’s strike partner Sunday over Nahomi Kawasumi. But the forward was ruled out of the match with an injured right thigh, and it’s unclear when she’ll be available. But if Menzies continues with his 5-3-2, and prefers Smith and Monaghan as wingbacks in this system, he might look to the bench for that forward position. Both Cameron Tucker and Kumi Yokoyama are perhaps more naturally suited to play in that role, and, as they both have made few appearances this season, would likely savor the opportunity to make an impact and earn more minutes.

Aptly, Menzies said in his post-game remarks that he is looking for someone to step up in the club’s four remaining games to be the goal scorer they desperately need.

“We have the right players — that’s not a problem. But you have to have the right attitude. It’s that instinct that you can’t coach,” said Menzies. “Like I told them at half time, you can’t just be a threat. You have to execute. There’s a difference and you have to understand that. Someone has to step up and take charge.”

Gotham FC will play their next match away at Washington Spirit on Saturday, September 17. Click here for more information on the team’s schedule and tickets.