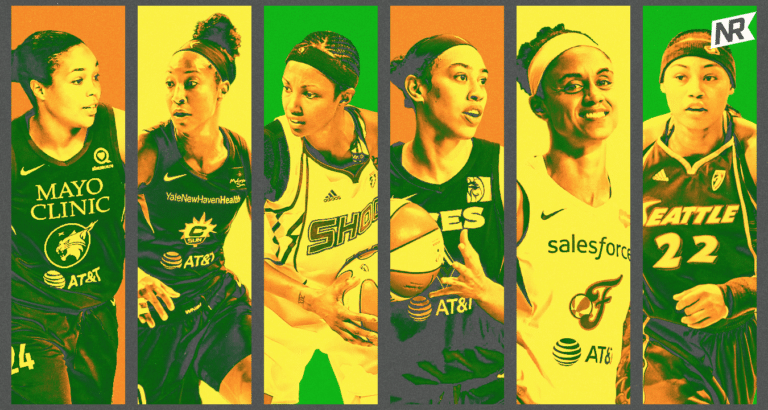 WNBA Draft: The History Of The Sixth Overall Pick

On February 10, the New York Liberty traded away the #1 overall pick in the 2021 WNBA Draft as part of an exchange for three-time champion Natasha Howard. Through a series of trades involving the Seattle Storm and Phoenix Mercury, the Liberty now own the #6 overall pick in the upcoming 2021 draft.

Throughout the league’s 24-year history, the #6 pick has brought home 11 championships, three Rookie of the Year awards, many All-Stars nods, and two WNBA Finals MVP awards.

The Liberty have owned the #6 pick just twice. First, in the inaugural season in 1997 when they drafted Sue Wicks, then again in 1999 when they drafted Crystal Robinson. Wicks played her entire six-year career with the Liberty, earning an All-Star nod in 2000. Robinson played nine total seasons in the league which included her first seven years with New York before signing with Washington in 2006.

Here, I took a look at all the #6 picks throughout the league’s history (yes, even the 1997 Elite Draft).

Success at Number Six In The WNBA Draft

There’s likely success and longevity for the #6 pick in this upcoming draft. Eight of the previous #6 picks and ten of the last twelve remain in the league. Excluding the last three picks (Mikiah Herbert Harrigan in 2020, Napheesa Collier in 2019 and Azura Stevens in 2018), all but five #6 picks except have played a minimum of four seasons in the league. The longest tenured #6 pick is Candice Dupree. Selected in 2006 by the Chicago Sky, Dupree is heading into her 16th season after recently agreeing to sign with the Seattle Storm. Dupree was named to the All-Rookie team in her first campaign, won a championship in 2014 with Phoenix, and is a seven-time All-Star.

Recently retired Crystal Langhorne, the #6 pick in 2008, played 13 seasons on just two teams. Langhorne won two championships while with the Seattle Storm (2018 and 2020), was named to the All-WNBA second team in 2010, and was a two-time All-Star.

The 2009 #6 pick, Briann January, is entering her 13th season. January won a title in 2012 with the Indiana Fever, later played for the Phoenix Mercury (2018-2019). and then signed with the Connecticut Sun in 2020. &nbsp;January is four-time All-Defensive First team, two-time All-Defensive Second team, and was named an All-Star in 2014.

The 2000 #6 pick, Betty Lennox, played 12 seasons during here career on seven different teams (Minnesota, Miami, Cleveland, Seattle, Atlanta, Los Angeles, and Tulsa). Lennox won the league’s Rookie of the Year Award, won a title with the Seattle Storm in 2014, was also named the Final’s MVP that year, earned an All-Star nod in 2000, and was named to the All-WNBA 2nd team in the same season.

Danielle Robinson, drafted in 2011 by the San Antonio Stars, is entering her 11th season after recently signing with the&nbsp;Indiana Fever. Robinson is a three-time All-Star, was name to the All-Defensive Second team for three seasons and earned a spot on the All-WNBA Second team in 2014.

Temeka Johnson, drafted in 2005 by the Washington Mystics, won the WNBA’s Rookie of the Year Award. Johnson’s career spanned eleven season on five different teams (Washington, Los Angeles, Phoenix, Tulsa, and Seattle). Johnson won a championship with the Mercury in 2009 and is one of only eight players in league history to record a triple-double.

Possibly the most successful #6 pick is Deanna Nolan. The Detroit Shock drafted Nolan in 2001, who played her entire nine-year career with the Shock. She would go on to win three titles, which included winning the 2006 WNBA Final’s MVP. Nolan was also a five-time All-Star and is the only #6 pick to be named to the All-WNBA First team (2005 and 2007).

The last eight #6 picks have amounted to success already.

Tianna Hawkins, drafted in 2013 by Seattle, recently signed a deal with the&nbsp;Atlanta Dream. After her rookie season with the Storm, Hawkins spent the next seven seasons with the Washington Mystics, where she won a title in 2019. Stefanie Dolson was drafted by the Mystics in 2014 and later traded to the Chicago Sky before the 2018 season. Dolson has been named an All-Star twice (2015 and 2017).

In 2015, the San Antonio Stars drafted Dearica Hamby from Wake Forest with the #6 pick. Hamby has been named the league’s Sixth Woman of the Year for the past two seasons.

For the 2016 WNBA Draft, the Connecticut Sun selected Jonquel Jones with their #6 pick. Despite sitting out last season, Jones has amassed numerous awards in her four seasons in the WNBA. Jones was named an All-Star and All-WNBA Second team in both 2017 and 2019. She was also named the league’s Most Improved Player in 2017 and won the league’s Sixth Woman of the Year award in 2018.

The sixth pick in 2017 belonged to Washington who selected Shatori Walker-Kimbrough who would also be&nbsp;named to the All-Rookie team.&nbsp;Prior to the 2020 season, Walker-Kimbrough would be traded to New York and then to Phoenix. After a standout season with the Mercury, she signed with Atlanta for the upcoming 2021 season.

The Dallas Wings drafted Azura Stevens in 2018 at #6. Stevens landed on the All-Rookie team for Dallas and then missed most of the 2019 season due to a foot injury. Following the 2019 season, Stevens was traded to the Chicago Sky where she played 13 games in 2020 before suffering a knee injury.

In 2019, the Minnesota Lynx drafted Napheesa Collier from UCONN. Collier had a standout rookie season landing her the Rookie of the Year award, an All-Star nod and the All-WNBA Second team. The most recent #6 pick was also drafted by Minnesota. Mikiah Herbert-Harrigan averaged just 3.8 points and 2.3 rebounds per game for the Lynx for her rookie season. Harrigan was recently traded to the Seattle Storm in exchange for the Storm’s 2022 first round pick (via Phoenix).

A pair of #6 picks spent seven seasons in the league. The 2004 pick, Nicole Ohlde, spent her time with Minnesota, Phoenix, and Tulsa before retiring in 2011, winning a championship with the Mercury in 2009. In 2002, the Lynx drafted Tamika Williams from UCONN. Williams played six seasons in Minnesota before closing her career out in Connecticut in 2008.

A Few Outliers From Past WNBA Drafts

The shortest stints in the league begins with the #6 pick in the 1999 WNBA Draft. The Cleveland Rockers selected Cindy Blodgett from Maine. Blodgett spent her rookie season with Cleveland before being traded to Sacramento where she would play until 2003. In 2012, the Phoenix Mercury would select Samatha Prahalis who would go on to be named to the All-Rookie team. Following the 2012 season, Prahalis would be waived midseason by Phoenix before spending time with New York, Atlanta and Los Angeles through 2014. In 2003, the Indiana Fever would select Gwen Jackson out of Tennessee. Jackson would be traded to the Phoenix Mercury during her rookie season and eventually also play for San Antonio Silver Stars.

In 2007, the Washington Mystics selected Bernice Mosby from Baylor. Mosby would go on to play all three of her seasons with the Mystics. Another Mystics’ selection, the 2010 #6 pick was Jacinta Monroe from Florida State. Monroe spent just two seasons in the league ending up with the Tulsa Shock in 2011. Lastly, in the 1997 Elite draft, the #6 pick by the Sacramento Monarchs was Judy Mosley-McAfee. Mosley-McAfee played 13 games for the Monarchs in 1997 and would go to sign a camp contract with the Los Angeles Sparks in 1998. The Sparks released her prior to opening day and only played one season in the league.

Promise for New York, Once They’re On the Clock

Though no MVPs have been produced with the #6 pick, Liberty fans need not worry all that much, even in what is being projected as a weak draft. Odds are that their pick will play at least four seasons and, hopefully, have a sustainable career and produce some of the numerous awards won by previous #6 picks. The WNBA Draft is reportedly set for April 15th.

Our latest mock draft has Alabama’s Jasmine Walker being selected by the Liberty with the #6 pick in the 2021 WNBA Draft.