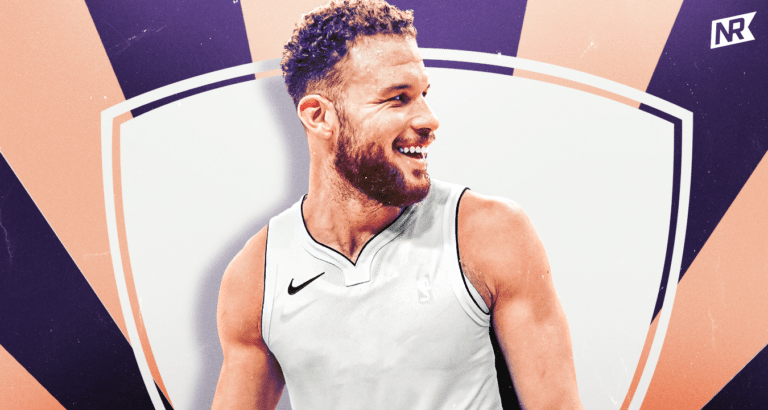 It's Just Like This Now: Blake Griffin is a Brooklyn Net
Home
Brooklyn Nets
Lucas Kaplan

It’s Just Like This Now: Blake Griffin is a Brooklyn Net

And on it goes. The rabbit hole where school happens in bed and the Brooklyn Nets are the talk of the NBA grows deeper. Those Nets now employ Blake Griffin, as Shams Charania made official Sunday evening. For the megastars of 2010s basketball, all roads lead to Brooklyn. The 2021 Nets were already a fever dream; the overlords are just clowning at this point. Blake Griffin!

Strictly thinking about on-court dynamics, it’s as tame a move as Sean Marks has made as Nets GM. A veteran with a fat salary on a bad team gets bought out and signs with a contender? That’s everyday stuff, even if Griffin was owed more than your average buyout candidate. The Nets also signed Jeff Green for the minimum; Marks acquired Bruce Brown seemingly just by saying please. As it affects winning, those moves should have raised far more eyebrows. Griffin’s legs have looked like soggy french fries in 2021. He was more than one step away from, say, competing in a conference finals series while in Detroit.

Yet, that’s too dismissive. It’s Blake Griffin, as hard as that is to remember! I’m not just talking about the All-NBA Third Team appearance he made two long years ago. Griffin received his first All-NBA honor weeks before James Harden was traded to Houston. Harden would spend the rest of the decade pushing the same boulder up the same hill, every year. His Rockets tenure eventually, unfairly, melted into one big failure. Now, still in his prime at age 31, he’s on another MVP-level campaign in Brooklyn. Meanwhile, Griffin reached the height of Lob City, kept getting hurt, and then got traded, banished to fade into the background as the engine of an uninspiring 8-seed in Detroit. Then, he fell entirely off the map. Now, after a career’s worth of doors have opened and closed by age 31, he’ll grind just to earn a rotation spot in Brooklyn. Time is fickle indeed.

It’s not as if Griffin was chopped liver sitting on the buyout market. Veterans that escape downtrodden situations somehow find life, just see Nic Batum. Besides Brooklyn, it was reported Griffin had a list of suitors, many that are locks for playoff positions. But, these days, the Nets get what the Nets want. Blink and the bench mob turns from Theo Pinson and DeMarre Carroll to – wait – is that Blake Griffin? Iman Shumpert? Andre Roberson?! Nets fans are still adjusting to rooting for a competent, competitive club, much less a capital-S superteam. But this is what it is, and what it’s gonna be. It’s a players league and the players want to play here.

The specifics of what Griffin can still do on the court are unknown. The high-flying, lob-catching 4-man he was in Los Angeles is long gone. During his healthy stretches in Detroit, he operated mostly as a point forward, but he could do just about everything on offense. In 2019, Griffin shot 36% on seven (!) threes per game, in addition to facilitating much of the Pistons attack, wheeling around the perimeter and high post areas looking for cutters, shooters, or his own shot.

Forgetting about the potential logjam Griffin causes in the frontcourt, it’s easy to find potential avenues for him to contribute. It’s been reported the Nets envision the 2011 Dunk Contest champion as a “small-ball 5”. That’s a role where you figure his connective skills, an ability to move the ball and set teammates up, could shine. Oddly enough, it’s a lack of ability to catch lobs that could determine a more exact fit for him in the lineup. It’s hard to imagine many Griffin minutes coming as a part of Harden-based bench lineups, given two factors:

I could see the bulk of Griffin’s minutes spent with Kyrie Irving and Kevin Durant on the floor. The ability to manage an offensive set, directing traffic and making timely passes, should be relatively unscathed by injuries. And playing off of superstar scoring talent should only amplify those skills. DeAndre Jordan has made some nice passes this season, but it’s not hard to imagine former-ex-teammate Griffin taking his spot on this type of action:

One can imagine the potential split-actions the Nets could run utilizing Griffin as a post passer, especially with shooting in the form of Joe Harris or Landry Shamet on the court. Even plays such as the one below, where Jordan records a screen assists amidst a web of Kyrie-KD interplay, could be spots for Griffin:

Defensively, Griffin will likely be assigned to the more Earth-bound 4s, and less physically intimidating 5s. It’s hard to imagine the Nets follow an all-out switching scheme with him on the court. Brooklyn has so many potential front court partners for Griffin, including KD, that it’s difficult to assume how the sausage is going to get made on that end before we see how Steve Nash wants to organize the lineups.

Rotations are a huge part of the question upon Griffin’s arrival in Brooklyn. Does “small-ball 5” mean he plays with Jeff Green, or Nic Claxton, or Bruce Brown for that matter? But they’re not the only issue. Will Griffin’s legs hold up for him to contribute in the playoffs? What if worst comes to worst and he falls out of the rotation, is everything kumbaya then?

Blake Griffin is not just another buyout big the Nets went dumpster diving for, regardless of how washed he’s been looking. Seeing Blake Griffin, one of the brightest stars of his generation, put on the Nets uniform, is going to be uncanny. As uncanny as this entire season has been. Blake Griffin led every SportsCenter for years while the Nets toiled away in dysfunction. Now, Griffin arrives in Brooklyn as a wanderer at the gates of salvation. A ring, a career revitalization, playing with old friends and new talent, who knows what awaits Griffin in the borough. Whatever it is, I can’t wait to see. After all, it’s Blake Griffin!