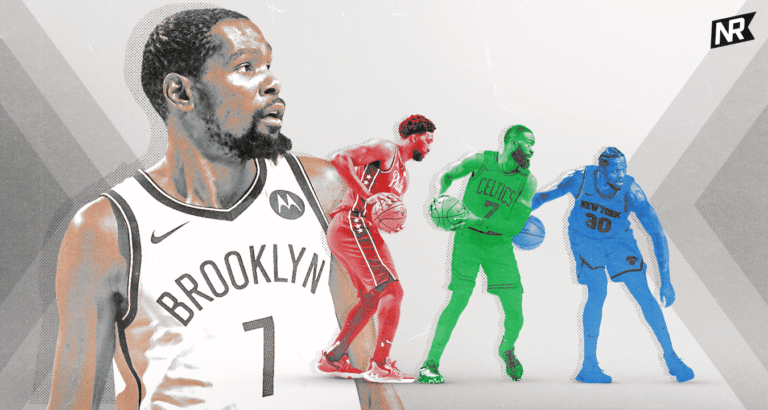 To kick off the season, the writers here at Nets Republic picked some of the Brooklyn Nets matchups we were most looking forward to in the first half of the season. As the NBA prepares to sprint through the post All-Star Break half of its calendar, we decided to do it again. A handful of our contributors got together to analyze which matchups caught our eye upon the NBA’s second-half schedule release. Here are the games we’re looking forward to:

I know, I’m going with the easy answer. It feels like the Brooklyn Nets have had their season “truly” begin a number of times this season. From opening night to James Harden’s first game in Brooklyn to the Big 3’s first game together, Nets fans have had to draw quite a few circles on their calendars. March 11, vs. the Boston Celtics, is another one.

For all the dominance Brooklyn exhibited throughout February, their big 3 has still only appeared in 7 games together. Sure, the Nets have outscored opponents by over 8 points per 100 possessions with Harden, Kyrie Irving, and Kevin Durant on the floor, but we’ve still only begun to digest this team’s potential. Every time the Nets start to get things clicking, a side-poking thorn emerges.

Well, ahead of Thursday’s game vs. the Celtics, the waters appear totally calm. Durant should be returning from a hamstring strain that kept him out most of February. Jeff Green, perhaps, probably, maybe should be returning from a shoulder injury suffered in LA? And, of course, Blake Griffin is here. If we include Griffin, there could be 13 players that have been rotation pieces for Brooklyn throughout the season. The sooner we learn about how Steve Nash may manage the rotation, the better.&nbsp;

This is what New York has been dying for. Basketball is back in the big apple as both the Nets and Knicks have turned heads this season but for different reasons. For Brooklyn, it’s all about championship aspirations with the three-headed monster of Kevin Durant, Kyrie Irving and James Harden. Otherwise known as “Scary Hours”. On the other side, the Knicks have been one of, if not the biggest surprise of the season so far. Led by Julius Randle who is having a career year and was selected to his first All-Star team, New York finds themselves in the midst of playoff contention in early March.

With both teams enjoying some semblance of success, this will be a highly anticipated matchup. Earlier this season, with Brooklyn’s roster depleted due to the James Harden trade having been announced earlier that day, KD led the Nets to a comfortable win over the Knicks at MSG. New York has boasted one of the league’s top defenses this season while Brooklyn boasts one of the best offenses. Needless to say something’s got to give. One thing is for sure — The New York sports Twitter TL before, during and after that game will be a bloodbath, no matter who wins.

If there was any question about who the class of the Western Conference was during the first half, the Utah Jazz eliminated plenty of doubters with a 114-89 win over the Los Angeles Lakers on Wednesday night. Though the defending champions are missing Anthony Davis, the Jazz have been hitting the high note all season. Since January 5, Utah holds a jaw-dropping 22-3 record after Wednesday.&nbsp;

What happened on January 5? Not only did the Brooklyn Nets silence the Jazz through a 130-96 victory at Barclays Center, they did so without Spencer Dinwiddie and a quarantining Kevin Durant. Kyrie Irving paced Brooklyn scorers with 29 points on 12-of-19 shooting. With Utah’s surge and the Nets’ acquisitions since that fateful evening, this nationally televised showdown becomes a realistic NBA Finals preview. Will Utah take revenge at Vivint Arena or will the Nets continue their uncanny conquering of the West? Brooklyn is 5-0 against the left coast’s top four teams (Jazz, Clippers, Lakers, Suns).&nbsp;

The Los Angeles Lakers have slid down the standings in recent weeks, mostly due to the absence of Anthony Davis. Davis should be back in the lineup well before April 10th, when the Brooklyn Nets face the defending champs at Barclays Center. The Nets won in Los Angeles on February 18th, but Davis and Kevin Durant both missed that game due to injury.

That previous matchup might not be all that telling given the glaring absences for each team, but it was nevertheless a defensive night worth noting for the Nets. Brooklyn held the Lakers’ offense to 98 points in that game, one of the seven times this season that Brooklyn has held their opponent under 100 points. That has more to do with the relatively slow pace of this game (92 possessions per 48 minutes per Basketball-reference, well below Brooklyn’s average pace for the season of 100.6), but any good defensive game is a positive sign for Brooklyn.

All of that being said, this game in April will have very little in common with the February game with neither team at full strength. The Nets don’t have all that much left to prove in terms of their caliber of play against the best teams in the league, but a win over the reigning champs is always nice.

Many Nets fans, including myself, have been looking forward to a possible NBA Finals preview with the Brooklyn Nets-Los Angeles Lakers game on April 10. However, the Nets-Sixers game will be more important and will have ramifications for the Eastern Conference playoff picture. Currently, the season series is split 1-1, with the Nets taking the first meeting on January 7 122-109, with the Sixers responding with a 124-108 victory on February 6. It is worthy to note that the Nets’ loss on February 6 involved both Kyrie Irving and Kevin Durant missing the game.

Heading into the All-Star Break, the Philadelphia 76ers are atop the Eastern Conference with a 24-12 record. A half-game behind them are the Brooklyn Nets with a 24-13 record.&nbsp; Many pundits around the league have been penciling either the Nets or the Sixers as the favorites to win the Eastern Conference in the Finals. With both teams presumably healthy, this game can give us a potential Eastern Conference Finals preview. Many storylines could be answered on this night as well. Can the Nets find a way to stop MVP candidate Joel Embiid? Can the Sixers stop the Nets offensive firepower led by Kyrie Irving, Kevin Durant, and James Harden? This rivalry game should be fun to watch and should provide a playoff-intensity atmosphere. The winner of this matchup could also potentially take possession of the coveted 1st seed in the East heading into the final month of the season.

With two games against Milwaukee in three days, these contests kick off Brooklyn’s final road trip of the season and will prove critical in the battle for seeding down the stretch. As it stands now, the 76ers, Nets, and Bucks are in a near three-way tie for first place in the East with Philadelphia owning the best record at 23-12, Brooklyn in second at 23-13, and Milwaukee sitting third at 21-13.

However Philadelphia goes the second half of the season, these two games could determine the higher seed between the Nets and the Bucks which will have critical playoff implications especially in terms of home-court advantage.

Outside of standings and seeding, these should be two great games between two highly talented teams. Their first matchup of the season was a 125-123 thriller where each team hit clutch shot after clutch shot down the stretch until Kevin Durant buried a 27-foot deep ball to put Brooklyn up for good with 36 seconds left.

Hopefully, we’ll be treated to another high quality of game with a similar final result.&nbsp;