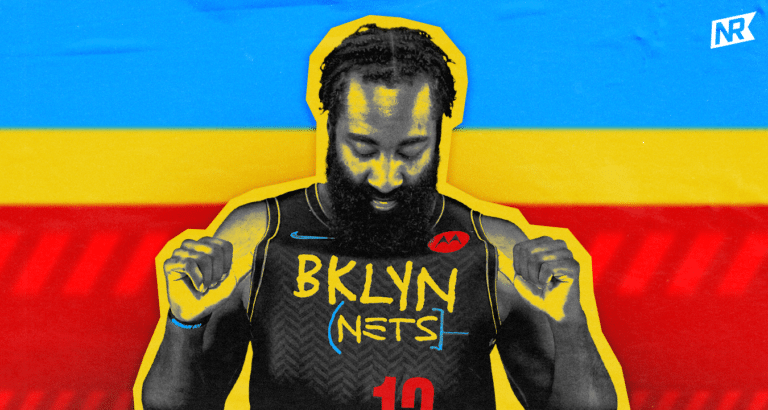 The Brooklyn Nets Are Clicking and Scary Hours Has Arrived

After a slow, inconsistent start, the Brooklyn Nets have stepped up their play and are beginning to look like the elite team Nets fans have been yearning for.

After a gut-checking, humiliating loss to the lowly Detroit Pistons on February 9th, the Brooklyn Nets held a 14-12 record and were the 3rd seed in the Eastern Conference. Head Coach Steve Nash, as well as superstar point guard Kyrie Irving and veteran forward Jeff Green, questioned the team’s aggressiveness and effort. The Nets’ poor defense as well as perceived lack of depth came rearing their ugly head. Something had to change in Brooklyn.

However, there was one notable quote from Irving during his post-game press conference.

“We just have to turn that corner. We haven’t done it yet, but we will and I’m telling you the league’s going to be on notice when that happens.”

Now, the league is definitely on notice. Since the loss to the Pistons, the Nets have won 10 out of the last 11 games, nine of which have been without superstar Kevin Durant, who has been rehabbing a hamstring injury. This run includes an 8-game winning streak that included a 5-0 West Coast trip with wins over the Suns, Lakers, Clippers and Warriors. So what changed? What caused the Brooklyn Nets to quickly turn their season around and turn the corner and bring all the attention to them?

Even though on the season they rank 26th in points per game allowed with 116.1 and rank 24th in defensive rating according to Cleaning The Glass allowing 114.1 points per 100 possessions, the Nets have actually steadily improved on the defensive end. Since their win vs the Indiana Pacers that started this run, the Nets have given up an average of 110.7 points a game. This would rank 11th in the league. Their defensive rating has also seen improvement, having the 18th ranked DRTG at 112.2 points. During this run, the Nets have also held three opponents, the Lakers, Magic, and Pacers, under 100 points.

The biggest catalyst to the Brooklyn Nets defensive improvements involve their ability to switch and rotate seamlessly and effectively. The Nets primarily play a man-to-man defense and switch on every defender when there is a screen, movement, etc. During the start of the season, the Nets would fall victim to overhelping on these switches, leaving wide-open opponents to either take wide-open shots from three, or cut into a wide-open lane for an easy dunk or layup. Now, the Nets are switching and rotating, and no one is left wide open.

In this clip, you can see the improved switching and rotations from the Brooklyn Nets defense. You can see that Bruce Brown starts off defending Rockets guard John Wall, while Joe Harris guards Rockets guard Victor Oladipo. Wall sets a screen, and Harris and Brown smartly switch defenders. You can also notice center Deandre Jordan rotating towards the paint to help defend against any drives to the paint. As this is happening, James Harden roams between the paint and the three-point line to help defend Wall’s initial drive to the paint. Harden also doesn’t overhelp, as he is able to rotate back over to Oladipo who also tries to drive into the paint. In the same way, Irving also helps onto Oladipo, while Brown switches over to contest PJ Tucker, forcing a missed shot.

The Nets improved defense also involves their personnel. Brooklyn can employ different lineups and defend any situation. The Nets can guard teams that go small by trotting out Bruce Brown or Jeff Green as small-ball centers. The team can also go big and play better pick-and-roll drop coverage with Deandre Jordan guarding the paint. Alternatively, they can also stay big, but maintain great on-ball defense and switchability with youngster Nicolas Claxton.

Another key factor in the recent surge is the quality play by the Nets role players. The Brooklyn Nets depth was severely questioned after the trade for James Harden, as it required losing key contributors in Caris LeVert, Jarrett Allen, and Taurean Prince. However, during this run, the Nets have found role players that have earned their minutes and have become key contributors. With how the Nets bench has been playing, one could argue that come playoff time, the Nets have a 10-deep to even an 11-deep rotation at their disposal.

Joe Harris, who earned every penny from his new $72 million contract, has proven himself as the ideal role player alongside the Nets superstars. Harris has continued his development and outstanding play and has cemented himself as one of the best shooters in the league. He also leads the league in 3-point percentage (50.6%) and also ranks 5th in the league in offensive rating (119.6), 3rd in effective field goal percentage (68.9%), and 6th true shooting percentage (69.2%). However, what’s more impressive is that not only is Harris shooting wide-open looks, but he’s shooting off the dribble, taking solid mid-range looks, and cutting straight to the basket.

Veteran Jeff Green has also been a key-part of the rotation. While being a backup power forward, Jeff Green has also been tasked as the small-ball center for the Nets. Shooting 42.2 percent from 3, his ability to space the floor allows Kyrie or Harden or even himself to drive or cut to the basket with ease. His defense is also notable, as Green can be seen guarding the opposing team’s best players.

Then there’s fan favorites Bruce Brown and the newly emerged Nicolas Claxton. Bruce Brown is the 6’4 swiss army knife for Brooklyn. Brown essentially does everything the team asks of him. He plays hard-nosed defense, sets picks, smartly cuts to the basket, grabs rebounds on both ends, shoots threes when needed. Brown’s activity is so crucial for the Nets that it either sparks massive scoring runs, or makes sure that no possession is wasted.

With Claxton, he’s playing to the level Nets fans have been hyping him up for. He’s an excellent roll/lob threat, and can create his own drives to the rim. In the games versus San Antonio and Houston, he has scored 17 and 16 points respectively, and has done it shooting a combined 82.3 percent from the field. As mentioned earlier, Claxton’s defense is already impressive twenty games into his career. He has shown great switchability, and can easily guard and contest the guard position.

As I wrote before, the Brooklyn Nets ultimately needed time to mesh, especially after acquiring James Harden. The time and patience has paid off. The Nets on both ends of the floor have been playing like a cohesive unit, and doing so with confidence.

Since we’ve discussed the defensive aspect earlier, let’s focus on the offensive end. Nets fans already know that Irving, Durant, and Harden can score 25 or more points on any given night, and that they are surrounded with shooters who can help light up the scoreboard. However, when you combine the superstar talent and solid shooting from their role players, it makes for an offense that is nearly impossible to stop. Currently, the Nets offense leads the league in scoring, averaging 121.1 points per game and in offensive rating at 118.2.

Much of the cohesiveness can be contributed to players understanding their roles and knowing where their spots are going to be on the floor. This starts with Harden running the point guard position and facilitating the offense. Harden is a gifted passer, and has orchestrated the Nets offense to run like a well oiled machine, as he leads the league in assists, averaging 11.1 per game. This helps especially when he knows where players like Harris, Brown, Johnson, Shamet will be on the floor, and easily draw the defense towards him with his gravity to get them open looks. Having Kyrie Irving and Kevin Durant also helps open up the offense, as they require just as much attention to guard.

Because of the talent, the Brooklyn Nets offense incorporates a lot of pick and roll and off-ball movement. Often leaving opposing teams confused and in a scramble to grab someone to defend.

In this clip, you see that Harden initiates the offense, passing to Landry Shamet and Deandre Jordan. Jordan hands off the ball to Kyrie who uses the Harden screen to free himself. This forces Rockets big man PJ Tucker to help his teammate John Wall to defend Kyrie as Wall tries to fight over the Harden screen. This opens up Jordan to roll wide open to the basket. However, Jordan notices Rockets guard Sterling Brown rotating over to the paint, and thus swings the ball to a wide open Joe Harris for the corner three.

Teams can not guard all three of Irving, Durant, and Harden, let alone the role players that they share the floor with. With defenses forced to guard multiple players at once, this opens up for the possibility for extra passes and exceptional ball movement. This creates easy and efficient scoring opportunities. The Nets offense makes this look easy because eight players in the Nets rotation shoot greater than 45 percent from the field, which requires defenses to play flawlessly against them.

The Nets are surging heading into the All-Star break, as they end the first half of the season with a 24-13 record and are the 2nd seed in the Eastern Conference. With the improved defense and hyper-efficient offense, the Nets are starting to look like the Finals contenders, many were expecting to see. Even with the amount of improvements, there is so much more potential for the Nets to unlock, especially with the return of Kevin Durant. Heading into the second half of the season, Scary Hours has definitely arrived in Nets World.