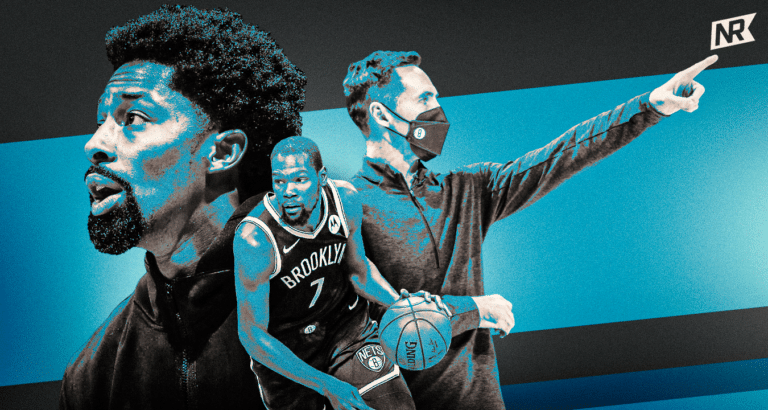 Though the Clock is Ticking, the Brooklyn Nets Still Have Time
Home
Brooklyn Nets
Migi Contreras

Though the Clock is Ticking, the Brooklyn Nets Still Have Time

Though the Brooklyn Nets are off to a slow start, there is nothing to worry about. This is still a contending team that will eventually find their groove — no need for mass hysteria.

there are championship expectations in Brooklyn — let’s not mince words.  Some might even say that this season should even be labeled “championship or bust.” After all, this is the best roster the Brooklyn Nets have fielded in years. And after stellar opening performances against the Warriors and Nets, the sky was the limit.

However, with a key injury to guard Spencer Dinwiddie dealing a significant blow to the rosters’ depth, the underperformance of the bench, and the continuous experimentation of rookie head coach Steve Nash, the Nets have slogged to a 6-6 start to the season. Though it is frustrating to watch a talented team like the Nets struggle their way out of the gate, there have been worse times than this. There are many factors to dive into, but the positive outlook for the season is that, even in limited supply, time is an asset for the Nets.

What to Make of the Brooklyn Nets’ Slow Start

Though it is easy to make note of the Brooklyn Nets’ 6-6 record and make hot takes, the start of the season is always well, it can a mess … especially in a time of unprecedented. Amid a condensed, 72-game game season during a global pandemic, the NBA and the teams have had to adjust on the fly. There were only two weeks of training camp, and it was deemed by pundits that the first 10 to 20 games of the season were going to be an extended pre-season.

This has seen other contenders such as the Milwaukee Bucks, Boston Celtics, and Miami Heat also start off slow. The Nets should find some distorted comfort in the fact that they aren’t the only one underperforming this year. Knowing the talent the Nets have, one can take the odds that the player performances can get better. Given the time, the players will hit their groove, and this team will function like a well-oiled machine. We’ve already seen Caris LeVert, who struggled in the first five or so games into the season, now start to hit his groove, stringing together a couple of solid performances.

The beginning of the season is also home to many forms of experimentation — namely lineups and rotations. Outside of Kyrie Irving and Kevin Durant, it is up in the air who runs with the starting five, and who comes off the bench. We’ve seen a wide range, as LeVert, Bruce Brown, Joe Harris, Deandre Jordan, Taurean Prince, Jeff Green, and Timothe Luwawu-Cabarrot have seen time in the starting lineup next to Irving and Durant.

Head coach Steve Nash himself has consistently said that he has been experimenting with lineups. Finding the perfect rotation and lineups takes time. It also takes time to develop chemistry for whatever rotation Nash finds ideal to work and play efficiently. However, once the lineup is set and the chemistry is developed in due time, the Nets should play at the championship-level type of basketball that many Nets fans have been clamoring for and deserve.

Speaking of Nash, him learning to be a great head coach, especially coaching a team with aspirations like the Brooklyn Nets do, well, you guessed it, takes time. Though Nash is a basketball genius, as evidenced throughout his career as a hall-of-fame point guard, he is slowly translating his point guard skills as a head coach.

Nash Finding His Footing as a Coach

Just as he experiments with lineups and developing chemistry with this team, there are traits as a coach that Nash is developing and getting a feel of. As mentioned above, Nash still needs to figure out what rotations and lineups to run on the court. He is still figuring out when to use timeouts, as evidenced by his seldom use of them. Thankfully, he has great assistants in Jacque Vaughn, Mike D’antoni, and Ime Udoka to assist.

Though it is easy to be frustrated, there are some positives so far in the early season. The offense led by Durant and Irving is living up to the hype and expectation. According to basketball reference, the Nets rank seventh in offensive rating. Also, even though the defense has obvious issues, namely rim protection and overhelping, the Nets have a top-10 defensive rating. This all adds up to the fifth-best net rating in the league. Though their record may not show it, the Nets have the numbers and capability of a championship-contending team.

The Nets may be off to a slow start, especially for a team pursuing the NBA Finals. However, in a season with only 72 games, amidst a global pandemic and social unrest, the Nets are in a solid spot. They have the talent and capability to unlock their potential to be the team many expected them to be. It’s just going to be a matter of time and chemistry for that to happen. Maybe the recent, inspiring, 122-116 win over the Nuggets could be the start of a much-needed winning streak. For Brooklyn Nets fans watching at home, we just have to be patient, and see what happens from here.