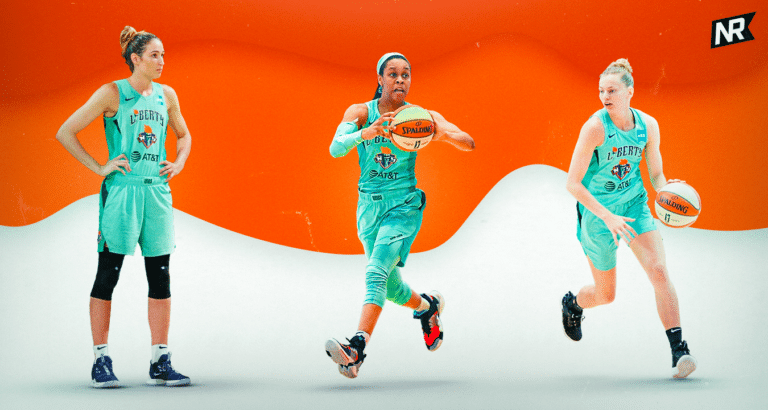 The 2020 New York Liberty were not a very good basketball team, but that’s what happens when you have a roster full of rookies playing in one of the most competitive sports leagues in the world.

The Liberty were also without a lot of key players who opted not to play in the bubble for various reasons: Asia Durr, Rebecca Allen, Han Xu, Stephanie Talbot, Marine Johannès. While those players might not have made the Liberty a playoff team, their absence was sorely felt as the team struggled to a 2-20 finish.

It’s unclear if all of these players will return next season. The Olympics could complicate that, as could free agency, as Her Hoop Stats has Allen and Talbot listed as free agents with suspended contracts, meaning that they can only negotiate with New York, though there’s no guarantee they end up in New York.

So, ultimately, which of these five players is most important to New York’s 2021 success? Let’s investigate.

Let’s go ahead and eliminate two players from this discussion right away.

Han Xu had a disappointing rookie season in 2019. She’s a really interesting fit for Walt Hopkins’s system, as she has the size and shooting touch to be the stretch five this team needs. But we saw her struggle on the interior last time she was on a WNBA floor and she’s likely still a couple of years away from being good enough to break into the team’s main rotation. Han is still arguably the most intriguing player on this team, but she’s not more important to success next season than the other players.

The more interesting case is Stephanie Talbot, who I’m eliminating now due to the fact she’s never played for the Liberty after being acquired in a post-draft trade and that she seems like the hardest player to find a spot for.

Talbot — the MVP of the WNBL this season — is a solid basketball player.

The Cases For Allen, Durr, and Johannès as the Top New York Liberty Returner

That leaves us with three players who would have likely been key pieces of this Liberty rotation this season: Rebecca Allen, Asia Durr, and Marine Johannès.

Let’s examine the cases for and against both players, starting with Allen.

Coming into the 2020 season, before COVID-19 changed the landscape of the league, I was incredibly excited about what Allen might be able to do in Walt Hopkins’s offensive system. Near the end of Katie Smith’s time as head coach, the Liberty were forced due to injury to use Allen at the four more, something that really helped unlock things for this team:

I was also excited about the possibility of more lineups where Allen shared the floor with Amanda Zahui B.:

With Zahui B. entering free agency this offseason, there’s no guarantee that we get to see that Zahui B./Allen frontcourt combination on the floor. But even if we don’t, Allen is the perfect stretch four for this system, regardless of who the Liberty put out there at the five. While there are understandable concerns about going small, Allen’s an active defender who won’t be a liability at the four. She can help your defense on switches and is an ideal fit for what Walt Hopkins wants to do with this team.

The play above is from the Katie Smith era for the New York Liberty, but still shows what Allen can do when playing the four. New York has the floor spread out, and Allen sets a screen at the top of the arc. From there, she pops over to the other wing, where she’s wide open for the catch-and-shoot look. There’s just so much in terms of spacing that Allen gives you.

The other two players, Durr and Johannès, are guards, so they fill a different kind of need for New York, who were forced to sign Paris Kea during the season last year to help shore up the guard position.

Both players should mainly play the two, but Johannès has the passing ability to spend some time running the point if the Liberty need her to, while Durr can slide down the three like Kia Nurse has and provide back up there, even if she doesn’t end up starting at shooting guard.

Durr was the No. 2 pick in the 2019 WNBA Draft. I wrote a piece before last season about how we can’t forget about Durr even after a disappointing rookie season, and that article still stands true after she missed her second season.

There are plenty of people who are discounting Durr at this point. On some level, that makes sense, as she’s a former top two pick who is entering her third season without a lot of tangible accomplishments in the W.

But Durr’s rookie year was a lot better than people think.

Her three-point shooting was an issue as she hit just 29.4% of her attempts from deep, but she was really good inside the arc, shooting 55.4% on her two-point attempts. That ranked seventh in the WNBA and second among guards. She was also strong in the pick-and-roll, with the Liberty scoring 0.913 points per possession with Durr as the pick-and-roll ball-handler, a mark that ranked in the 91st percentile.

Durr admittedly has to improve her three-point shooting to stick on this team, but she did shoot over 40% from deep in two of her seasons at Louisville. She has the skills to be a high-end shooter, but struggled when spotting up and shooting off screens her rookie year. Hopefully, a year away doesn’t magnify those issues and Durr is able to look more like her collegiate self as a shooter. The increased spacing on this team and Durr not having to be the first, second, or even third option when on the floor should help with that.

The final opt-out was Marine Johannès, who I think is inarguably the most fun player that we’re discussing in this article. Her passing ability is just, well…really good:

Seriously, I can’t overstate how fun it is to watch Johannès play basketball.

Additionally, in her 19 games in 2019, she shot 37.9% from three with a 93rd percentile three-point attempt rate. She also went from never having played in the WNBA to having an 88th percentile assists-to-turnover ratio. She’s both a flashy ball-handler and also a very responsible ball-handler, and that was on a struggling team in a season where Johannès missed part of the season due to international play.

Her role on this current team would likely be as a secondary ball-handler off the bench, someone who wouldn’t actively play the point too much but would have the basketball in her hands plenty when she was in the game at the two.

Johannès would really help the New York Liberty. Her shooting makes her more valuable than Asia Durr to this team, as she’s really just an ideal backup guard for this team, with the upside to work her way into the starting unit.

But ultimately, I have to go with Rebecca Allen as the most important player among the opt-outs. The Liberty have a lot of young wings, but they don’t really have a player who can play that stretch four role who we can definitively say is part of this team’s future. Kylee Shook, Megan Walker, and Jocelyn Willoughby all have lots of upside, but Allen is the better player right now. She fills a huge need for this team. Allen needs to be a member of the New York Liberty in 2021 for this team to reach its full potential.