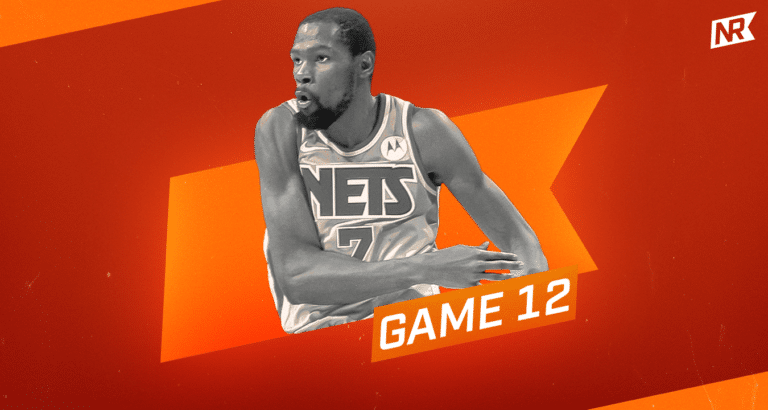 Three Takeaways From the Brooklyn Nets’ Win Over the Denver Nuggets

In a back and forth thriller, which still feels like an understatement, the Brooklyn Nets came out on top of the Denver Nuggets Tuesday night 122-116.

Considering the drama surrounding this team (another understatement), this type of win over a strong Denver squad feels like a turning point. With that in mind, here are three takeaways from the Brooklyn Nets’ come-from-behind victory.

The leaders for the Nets offensively — Kevin Durant and Caris LeVert — carried Brooklyn throughout the first half and continued to come up big in the second.

Late in the fourth, Durant scored six points in the final 1:14 of the game including a dagger three with 28 seconds to close it out. That type of play is exactly what Brooklyn needs from its superstar in the final minutes. His 34-point, 13-assist, and nine-rebound performance on 12-18 shooting (four-of-seven from deep) is the epitome of a big-time player having a big game. In Irving’s absence, Durant is stepping up and has reached the MVP-candidate level of play that so many doubted he could return to.

Off the bench, LeVert continues to hit his stride offensively. He put up 20 points on 8-15 shooting (two-of-five from three) along with six assists and just one turnover. Considering how little he’s working with off the bench, that line is impressive as LeVert was once again responsible for carrying Brooklyn’s second unit.

Sloppy play on both ends in the first half

While, in the end, Brooklyn was victorious, the squad was by no means flawless. The reliance on Durant is great, but it also led to some sloppy play on the offensive side of the ball. The Brooklyn Nets finished with 18 turnovers (11 of which were in the first half) including seven from Durant alone. Fortunately, the good outweighed the bad in the second half as the playmaking took over.

Defensively, the first half was a bit of a nightmare for Brooklyn. Denver put up 70 — which, yeah, not exactly ideal — and seemed incapable of missing at times. Part of that is likely due to Brooklyn giving them too many opportunities as a result of sloppy offensive play. But, letting up that many points in a half is a concern. Then again, the Nets turned things around in the second half, holding the Nuggets to just 46 points — getting stops late in the game when it mattered most.

Despite a 16-point deficit at halftime, the Nets pulled their way back into the game in the third quarter behind Durant’s playmaking and solid offensive complementary play from Bruce Brown and Joe Harris. In fact, after the Nuggets pulled ahead by eighteen at the 9:56 mark in the third quarter, the Brooklyn Nets proceeded to go on a 29-4 run to pull ahead 90-83 with 2:36 left in the third.

In his best performance as a Net, Brown came up huge in the third and stuck with it in the fourth. Finishing with 16 points, five rebounds, three rebounds, and three blocks, Brown added six points in the final three minutes of play, working as a secondary option for the Nets late in the game. Brown took the pressure off of Durant and Levert tonight, and he has the opportunity to earn a big role with this team moving forward. If the former Detroit Piston can maintain this type of play or even just something close to it, that would be massive for a Brooklyn team lacking playmaking.

Brown also did an impressive job guarding Jamal Murray, disrupting Denver’s lead guard and ensuring he never got into a rhythm. While Murray finished with 20 points, that was on 9-20 shooting and included three turnovers. Brown was a plus on both ends tonight and that’s great to see.

After a quiet first half, Harris began hitting in earnest in the third. His 15 points and four assists helped spark the offense when there wasn’t much cooking. He’s nothing if not consistent, now extending his games with a three-pointer streak to seventy-two games. Undoubtedly, Harris’s contributions are going to continue to be critical for a depleted Brooklyn squad.

With an encouraging win tonight, the Brooklyn Nets will now turn their attention to the New York Knicks as the two teams tip-off for the first time this season tomorrow night at 7:30 PM Eastern time.