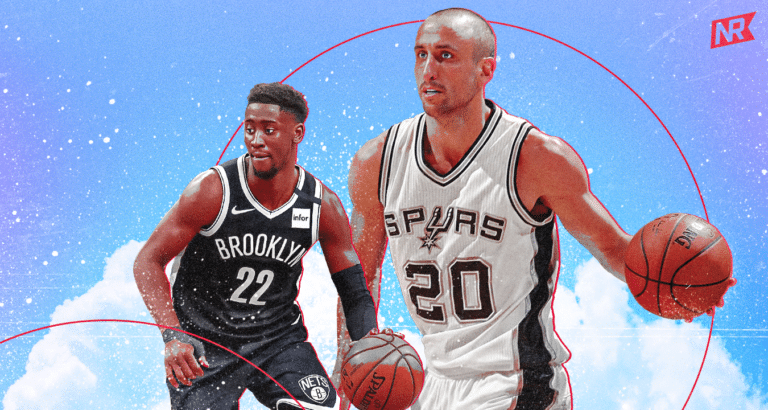 Brooklyn Nets: Caris LeVert, Manu Ginobili, and the Value of the Sixth Man

Caris LeVert coming off of the bench for the Brooklyn Nets would only be the next installment in a lengthy saga of sixth men aiding championship runs.

Nothing about Caris LeVert’s journey in the NBA has been orthodox. But he’s defied the odds, no matter how high they’ve been stacked against him. Neither LeVert nor the Brooklyn Nets were exactly top-shelf material in their respective fields when the two sides came together. But in that partnership, dating back to 2016, the two parties have only made each other better.

Personally, I define the term clutch as “exactly what you need, exactly when you need it.” Say what you will, but it’s hard to argue that Caris LeVert hasn’t been that kind of player throughout the entirety of his tenure with Brooklyn. And that isn’t an issue with the 26-year old, who’s spent his four years in the NBA constantly adjusting in the most varying of roles.

LeVert has played 213 games in his career thus far, but only 92 of them were as a member of the starting five. It’s not because he wasn’t more talented than the guy in front of him, and it wasn’t because of injuries that he saw those promotions—no, the Nets have relied on LeVert to be as fluid as the franchise has been itself. Brooklyn’s undergone a transformation from a bottom-five team, to a pesky playoff sixth seed, to now a legitimate title contender. And that’s all in just a four-year span.

This is exactly why first-time head coach Steve Nash felt comfortable when speaking with the media about LeVert’s role in this upcoming season. He told reporters that he could envision the guard playing a Manu Ginobili role for the Nets:

“He’s so good with the ball in his hands that there’s a case to be made that he plays that (Manu) Ginobili role…..There is a though though that he could have more reps with the ball in his hands if he captains the second unit for two stretches in a game, then plays with the starters at moments or to close. All that stuff is to be figured out but it’s great decisions for a coach to have.”

For those unfamiliar, the future Hall of Famer was one of (if not the) the greatest ever to play the sixth man role in NBA history. Ginobili helped the San Antonio Spurs capture four titles in his 16-years with the team. And up until his final season in the league, the Argentian guard was making the most of his playing time—by being clutch. At age 39, Ginobili had a game-winning block on All-Star guard James Harden in Game 5 of the Western Conference SemiFinals, pushing the series to six games.

It’s those kinds of moments head coach Steve Nash and the Brooklyn Nets are envisioning for Caris LeVert. With Kyrie Irving and Kevin Durant leading the charge in the first unit, it’ll be his responsibility to help manage the minutes they’re not featured on the floor. And even taking the preseason nature of the exhibition into account, LeVert did look he could make a nice fit as the leader of Brooklyn’s second unit. He finished with 18 points in 20 minutes of play in Friday night’s win over the Boston Celtics.

But similar to the ever-changing stage of LeVert’s career, his snub from the starting five may end up being credited to injury. It’s not the fit next to Kyrie, at least I don’t think. No, LeVert wasn’t healthy (bruised patella tendon) and able when the Nets’ opened their preseason last Sunday against the Washington Wizards. So it was Spencer Dinwiddie that joined Irving in the backcourt, and the two looked like a cohesive unit. The guards combined for 28 points, 11 assists, and seven rebounds in their first action together, and the team’s 119-114 win over the Wizards. What was once just an option became a real-life solution on the court, and it’s likely what you’ll see in Tuesday’s season opener. But if Caris LeVert can replicate his play from Friday, they’ll be just fine.

Any immediate analysis of his lone preseason appearance should be prefaced with that exactly, that it’s the preseason. But my first thoughts of Brooklyn’s second unit is simple: it’s probably the most talented of the entire NBA. That is almost completely based on LeVert’s ability to initiate the offense. But as head coach Nash said himself, the guard can move the ball well in terms of both his handles and distribution, and he’s served as the unconventional point guard in the past. The lineups Brooklyn deploys will ultimately prove not only best for the team, but for LeVert himself. Against the Celtics, the Nets were running him next to Landry Shamet, Taurean Prince, Jeff Green, and Jarrett Allen. That’s three guys who averaged a combined .356 shooting percentage from behind-the-arc last year. And Allen, who’s two-man game with LeVert is already proven to be fruitful.

Caris LeVert is going to be open to a number of avenues on offense, if and when the Brooklyn Nets commit to bringing him off of the bench. His ability to penetrate inside nearly guarantees he’ll find an open shooter along the perimeter. But if not, the pick-and-roll action between him and Allen should prove a deadly option B. None of this is to say things would be that much different if the team was rolling out Dinwiddie, and chances are they’d see a relatively similar product. But where LeVert is bested by his teammate in passing ability, he sits atop in terms of overall versatility and offensive arsenal.

Between the widely expected soft approach to the season’s start for Kyrie Irving and Kevin Durant, to the second unit’s lack of a primary ball-handler; LeVert may prove the most important player with direct ties to the team’s results. If Irving can’t rest and/or Dinwiddie is forced to play a full 48 minutes on a somewhat regular basis, it’ll only add another wrinkle into the Brooklyn Nets plan and capability within an already-slim championship window. But this move would be about far more than the current team’s specific personnel. The role of the sixth man is a necessary piece to any contending roster. That’s why head coach Steve Nash made the correlation between the Brooklyn guard and the future Hall of Famer. He knows that if this Brooklyn Nets team is going to reach an NBA Finals, they’ll need a Ginobili-caliber lift from whoever plays the role of the sixth man.

For the Dallas Mavericks, it was Jason Terry, and for the Los Angeles Lakers, it was Lamar Odom. It was Andre Iguodala for the Golden State Warriors, and of course, the San Antonio Spurs had Manu Ginobili. If the Brooklyn Nets and Caris LeVert embrace this opportunity, who’s to say they won’t join the list of champions before them?