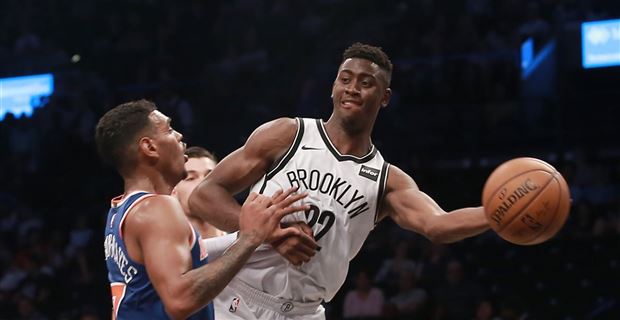 In this the second segment the scribes make their selections for NBA Awards 2017-18. Additionally, we also take a look at if and when any Brooklyn Nets might find their names included in the end of season awards.   In part three of the four part Awards Segment we dive into reserves as sixth men and All NBA Teams. Moreover we examine Caris LeVert and other Nets reserves for their potential and ponder future All NBA Nets player potential.

Lead candidate Fred Van Vleet looked like the next incarnation of Kyle Lowry in spearheading the dominant Toronto Raptors bench. FVV causes havoc defensively despite his size and offered much needed smart ball movement and reliable shooting to the revamped Raptors. Runner up Lou Williams had the best shooting season of his career to surprisingly become the lead option of the Clippers offense by midseason.

Lou Will’s scoring was so potent his usual suspect defense became a lapsed memory as the Clippers made a playoff push even with little Blake Griffin play this season (and ever again). Third-place goes to the Heat’s Kelly Olynyk who thrived as a stretch big in his first year under Spoelstra. Olynyk offers decent resistance defensively despite having the leaping ability of a penguin and has even proven himself as a weapon attacking closeouts.

Lou Williams, G, Los Angeles Clippers: Williams averaged 22.9 points per game this year while starting in just 19 contests. He’s the Sixth Man of the Year, and frankly it’s not even close.

Fred VanVleet, PG, Raptors: The former Wichita State Shocker made a leap from irrelevancy this year and became one of the top reserves in the NBA.

Eric Gordon, G, Houston Rockets: Gordon was one of the most reliable bench players in the NBA this year, and although he had an off-year shooting by his standards, he was immensely valuable to the Rockets.

Since I live in Toronto, I’ve witnessed the rise of the Toronto Raptors bench, so I’m a bit biased here. Although he won’t win there is much to be said for the Fred VanVleet and his effect on the entire squad. Having the benefit of observing the first round series it offers support to the argument. Sure, the Raptors won round one, but go view Game 6 and notice how much more cohesive the reserve unit was with Freddy in the mix. Additionally, VanVleet logged the most fourth quarter minutes and the Raptors held the top ranked defense in both the regular and postseason in the final frame. I’d like to see the Raptors Bench Mob be rewarded for what they did this season which means Freddy (but, it won’t happen).

The reality is Sweet Lou likely has this sewn up and Eric Gordon will also garner votes. Will Barton was also impressive for the Nuggets.

Who is your top Nets Reserve player?

Caris LeVert, barely, over Joe Harris. Caris finished the season strong after a miserable start, and his all-around game made him a great fit in basically any lineup. He looked more comfortable from beyond the arc than he did last season, and his decision-making and passing both looked significantly better in Year Two.

The Nets roster has shuffled so often due to injuries and trades that almost every player on the team got some significant run as a starter. However, in the spirit of the honor, the top Nets reserve of 2017-18 was Joe Harris who became one of the better off-ball weapons in the entire league. Harris motored around the court like prime Rip Hamilton for open spaces and hurt defenses when he found them beyond the arc by shooting nearly 42% from three. In a year where Brooklyn went cold quite often with the jumpers, Harris was the one consistent shooting option.

Caris LeVert. He’s one of the most versatile players on the team, with the ability to fill so many different roles you’d think he was Meryl Streep. He can shoot from the perimeter, act as a main playmaker, defend multiple positions, and create his own shot if need be.

He fills quite a few gaps on the Nets’ roster and though he may not be a finished product yet, but he’s well on his way to becoming one of the most indispensable players on the team.

Caris LeVert displayed some moments of brilliance this season. His length and natural talent offered highlight moments. I’m dying to see how he fares in a season when all the Nets guards are healthy and his role, minutes and backcourt partner remain consistent.

Caris LeVert edges out Joe Harris for top Nets reserve this season. LeVert averaged the fifth most points (12.1 points) on the Nets off the bench and third most assists (4.2 assists).  Harris deserves a mention too though, 10.8 points per game on 49.1 shooting from the floor and 41.9 shooting from three.

Steph Curry drops based on how many games he missed, ditto for Butler, but they still deserve their spots.

Which Nets player has the best shot of making an All-NBA team? (now or in the near future)

I think Jarrett Allen might have the best shot at an All-NBA team in the future. Center has been the easiest position for earning an All-NBA berth in the past decade or so, and Allen arguably has a higher ceiling than even D’Angelo Russell. D’Lo is a close second and would probably earn a berth earlier than Allen if they both made an All-NBA team; however, the competition for a guard spot will be much tougher.

Just based on how young he still is, Jarrett Allen has the best shot to develop into an All-NBA contributor. The center position is currently loaded with young dominance so Allen would have his work cut out for him. Yet, Allen should see rapid development in the next few years.

D’Angelo Russell? Jarrett Allen? Rondae Hollis-Jefferson? At this point it’s a complete toss-up. The Nets have some players with high-end potential but for the large part, they’re too far away to comfortably pick one to get there.

If I were to put money on it, I’d say Russell has the highest probability of actually making an All-NBA team at some point but there’s too much uncertainty around him to say.

Jarrett Allen could make it but given the amount of young, talented centers around the league, it doesn’t seem likely. RHJ could make it at some point but he needs to make a monumental leap offensively to leapfrog players like Paul George and Giannis who are expected to keep racking up selections for the foreseeable future.

Again, the team has talent but no player has quite proved themselves to be enough of a stand-out to make an All-NBA team.

Jarrett Allen might make an All Defensive team, but I’m not sure if he’ll progress to be All NBA simply because there are so many solid centers now. The question is whether D’Angelo Russell can deliver a season similar to what Victor Oladipo did this year.

Presently? No one on the Net’s roster is All-NBA caliber. But in the future? I could see D’Angelo Russell becoming a All-NBA caliber starter if his development continues under Atkinson.